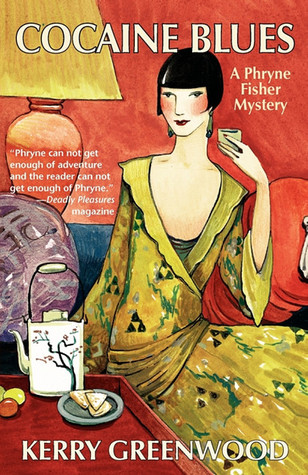 My Review: First mysteries aren't to be read for their mystery value, but rather for their potential to amuse and engross one in the series character. I offer my dearly beloved Russell Quant's series debut, "Amuse Bouche", as evidence...moderately good mystery craftsmanship, wonderful character development. Another example, perhaps better known to all and sundry, is Donna Andrews's "Murder with Peacocks"...promising craftsmanship, delicious character building.

This book is no exception. The mystery is ~meh~ but the sleuth and her supporting cast are either immediately endearing or anathema. I fall on the endearing side because 1) the 1920s are very interesting to me, and the series is set in 1928, and 2) Australia fascinates me. Phryne, our heroine, is a nicely imagined flapper of the day, and her background (more on this anon) is pleasantly complicated which goes a long way to explaining how she got to be the free spirit that her social milieu would not obviously produce.

Melbourne, Australia, isn't exactly on any international map as a cultural hotspot. A book set there has a lot of 'splainin' to do, to quote Ricky Ricardo from "I Love Lucy". Greenwood does comparatively little of this 'splainin' and that is a problem for this reader. Greenwood also shorts the background of Phryne, named for a famous prostitute of Classical Greece...what the hell?!? We really see here, more or less, a character sketch, a piece designed to introduce a particular attitude and mood, to the reader.

The book itself is rather too short. This goes a long way to explain the missing details I've pointed out, and the others I can't comment on without the dread spoilers. Had I bought this hardcover edition for $25, I would be a lot more testy than I am in my review. A trade paper edition for $12 would have irked me, and a mass market edition for $7 would merit a grumble.

And that's a good sign! I liked every one of these series characters and I wanted more of them. Several incidental characters could profitably bear beefing up too, like Sasha the dancer and his Princess granny; I suspect, though, that somewhere in the next 15 or so books these folks will reappear.

I've already read book two in the series, review forthcoming, and have the library looking for three and four. So do I recommend the series, flaws and all? Yes. Most definitely I do. I caution against getting your expectations too high, only because I want Kerry Greenwood to have your business for all sixteen books in the series. She's a writer with the pleasant and rare gift of being fun to read from giddy-up to whoa.

The completely scrummy Essie Davis in the title role of The Hon. Miss Phryne Fisher. She is visually perfect, in that she matches precisely my internal portrait of the character, and she is a very charming actress with a beautiful lilting voice and that "something" that stars have...you want to keep watching her.

The show is as beautiful as the star to look at, and the flaws in the novel become the virtues in the episode based on it. The very things I found so annoying in the book, the telegraphed developments and so on, make the adaptation just about perfect for a delightful hour of TV. Netflix has the first season available, and I have watched the first five.

A definite recommendation from me. Melbourne looks charming, the actors are all more than up to their roles, and the story is perfect for an hour's visit. What's not to love?
Posted by Richard at 12:34 PM