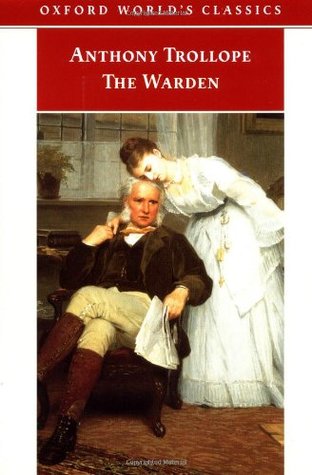 The Publisher Says: The Warden centers on Mr. Harding, a clergyman of great personal integrity who is nevertheless in possession of an income from a charity far in excess of the sum devoted to the purposes of the foundation. On discovering this, young John Bold turns his reforming zeal to exposing what he regards as an abuse of privilege, despite the fact that he is in love with Mr. Harding's daughter Eleanor. It was a highly topical novel (a case regarding the misapplication of church funds was the scandalous subject of contemporary debate), but like other great Victorian novelists, Trollope uses the specific case to explore and illuminate the universal complexities of human motivation and social morality.

My Review: First read in the 1980s, during the first Reagan Administration, I was struck at how little things had changed in the past 130 years. Mr. Bold's lawsuit and its unintended consequences, the fuss and kerfuffle over the uses of “public” (really now, could the specific bequest of a trust to support a charitable activity and administered by the church be considered public today?) funds in a manner the onlooker simply didn't like...think Chrysler bailout, but not International Harvester or US Steel...all of this resonated with me.

Eleanor Harding was no one's fool, hooking up with that pill of the first water John Bold! And I have to say that the portrait of Dickens as Mr. Popular Sentiment made me chortle.

But on re-reading the book in 2012...well...the magic eluded me. I think this was a book that needed the element of not knowing the ending to make the events fun. Since I knew already who was going to do what, I had no huge amount of interest in following the path laid out for me. It was still amusing. It wasn't ever gripping, but it was involving. Now, after 30 years, much of what took place had fled from my head until the words hit my eyes. But as they returned, it was as blocks and lumps and boulders, not flowing back into the river of my thoughts like cool springs and bright brooks.

Good Victorian stodge. But once was enough.