Book-A-Day #22: A novel with an exotic setting, THE MERRY MISOGYNIST 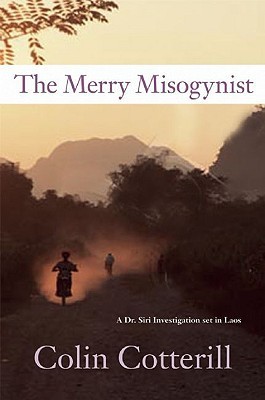 The Publisher Says: In poverty-stricken 1978 Laos, a man with a truck from the city was "somebody," a catch for even the prettiest village virgin. The corpse of one of these bucolic beauties turns up in Dr. Siri's morgue and his curiosity is piqued. The victim was tied to a tree and strangled but she had not, as the doctor had expected, been raped, although her flesh had been torn. And though the victim had clear, pale skin over most of her body, her hands and feet were gnarled, callused, and blistered.
On a trip to the hinterlands, Siri discovers that the beautiful female corpse bound to a tree has already risen to the status of a rural myth. This has happened many times before. He sets out to investigate this unprecedented phenomenon--a serial killer in peaceful Buddhist Laos--only to discover when he has identified the murderer that not only pretty maidens are at risk. Seventy-three-year-old coroners can be victims, too.

My Review: The Doubleday UK meme, a book a day for July 2014, is the goad I'm using to get through my snit-based unwritten reviews. Today's prompt is the twenty-third, favorite novel with an exotic background.

Laos in 1978 counts as exotic to me. I'm not sure the Laotians would agree, probably thinking of Long Island suburbia as exotic. It's all where you stand.

I love the series mystery world for its orderliness and its assurance that Right will be done. In this sixth Dr. Siri mystery, Right is indeed done and just in the nick of time. There's a secondary plot that I wasn't sure was needed, concerning Crazy Rajid the naked Indian who hangs with Dr. Siri, Comrade Civilai, and Inspector Phosy down by the Mekong. It doesn't seem necessary to me, but then why the hell not, it was fun.

The crimes and the punishment are well-handled here, and the believability of the situation created was up to snuff. But the star of the series, pace Dr. Siri, is Laos in all its tropical glory. I thoroughly enjoy my trips there, which I most emphatically would NOT if the trips were physical. As I huddle in front of the air conditioner, cursing temperatures that make me sweat and suffer but which would seem almost wintry to the Laotians, I visit the beauty of the jungle...without the bugs or the sweat.

I love that. Thanks for taking me there, Colin Cotterill!

This work is licensed under a Creative Commons Attribution-NonCommercial-ShareAlike 3.0 Unported License.
Posted by Richard at 10:39 AM