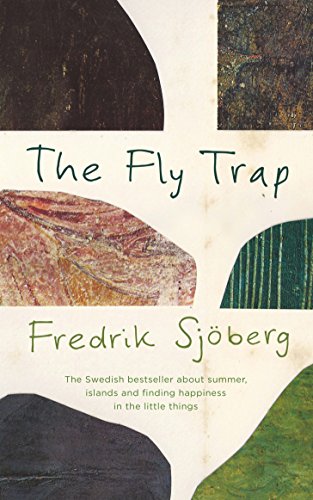 THE FLY TRAP: A Book About Summer, Islands and the Freedom of Limits
FREDRIK SJÖBERG
Particular Books
$25.00 hardcover, available now

The Publisher Says: Warm, funny and insightful, The Fly Trap is a meditation on collecting; be it hoverflies or fine art. A fascinating web of associations, it begins with Sjöberg’s own tranquil experience as an entomologist on a remote island in Sweden, and takes in heroic historical expeditions to Burma and the wilderness of Kamchatka. Along the way, Sjoberg pauses to reflect on a range of ideas – slowness, art, freedom, – drawing other great writers, like D.H Lawrence and Bruce Chatwin, into dialogue. From the everyday to the exotic, The Fly Trap revels in the wonder of the natural world and leaves a trail of memorable images and stories.

My Review: The Doubleday UK meme, a book a day for July 2014, is the goad I'm using to get through my snit-based unwritten reviews. Today's prompt, tenth in the series, is to choose a book with a memorable picnic in honor of some ridiculous teddy bear thing.

Now seriously. Anyone who's known me ten minutes can be excused from the room for a laugh break. A picnic! The clambake on the beach in Professor Diggins' Dragons, a chapter book I read in 1967 or so, then the famous allusion to a picnic in Lolita...was there some talk of a picnic in a Hardy Boys or Nancy Drew book? Can't remember...anyway, I am not the sort of hairpin of a guy who reads books with picnics in. And I need to keep the pace going with this meme! What to do, what to do....

Then it hit me: Picnics are outdoors customarily, aren't they, so a book about the outdoors will work! And I just read a doozy: The Fly Trap, a Swedish weirdo's reminiscences (some would say maunderings) of his life in the cutthroat world of hoverfly expertise.

Since I had no idea what the hell a hoverfly was, I wiki'd it up and spent a good half-hour marveling at gems like, "About 6,000 species in 200 genera have been described." Described! Dear and glorious physician, someone down through the ages has always not had a life, of course, but the amount of wasted drinking, reading, and screwing time that describing "about 6,000 species in 200 genera" represents just boggles my mind.

And this guy's a nice-enough looking man, he doesn't appear to have any cognitive defects, and he's Swedish, so getting dates can't have presented that much of a problem for him that he had to give up and start collecting flies. He explains why he chose to write his memoir, and a bit of why he's in the fly game at all:


The hoverflies are only props. No, not only, but to some extent. Here and there, my story is about something else. Some days I tell myself that my mission is to say something about the art and sometimes the bliss of limitation. And the legibility of landscape. Other days are more dismal. As if I were standing on queue in the rain outside confessional literature’s nudist colony, mirrors everywhere, blue with cold.

So I get it, Mr. Man, you're not Eric Northman and you'd like folks to pay you some attention. Check! Do it in art. write lovely sentences, people will pay attention to you. Chalk up a win for the fly guy!

And then there's the stuff he finds out as fly-hunting takes over his world. There was, apparently, a Swedish guy named René Malaise (!) whose wildlife-hunting expeditions to places like Kamchatka, on the Pacific fringe of Russia, led to his invention of the Malaise Fly Trap. (This is not a goof, I looked it up.) A piece of this book reads like a failed start on a biography of Malaise (what a horrible name! "Reborn Misery" yuck), which was really very intriguing. Emulating this monadnock of the fly-guy world, Our Hero takes off and travels around the world to see what he can see. The important part of his bring-back was this:


When the days are numbered, everything seems clearer, as if the time between preparation and departure possessed a particular magic. The endless stretch of time on the other side always struck me as evasive and treacherous. But the very limited period between now and then held a liberating peace and quiet. This allotment of time was an island. And the island became, later, a measurable moment. For a long time, this discovery was the only truly unclouded dividend that I took from my travels.

I think I was the only person in the USA who watched the film The Adventures of Buckaroo Banzai, but I did and I loved more than anything the line Peter Weller speaks as Buckaroo: "No matter where you go, there you are." Sjöberg clearly gets that, and decides to come home to the place where everybody speaks his language. No more wandering for him...he'll settle down in Sweden, near Stockholm, on an island!

Now there is very little in this world that is better at focusing one's attention on the practical realities of life than living on an island. I live on a really big one, but part of living here is knowing how and when to get off the island. And if one can't, what are the options? I meditate on these matters, always coming back to the realization that island = Atlantic Ocean, and that's a BIG piece of water, and there are storms out there pretty much all the time...


It’s said to be the same all over the world, in all seven seas. Islands are matriarchies of a kind seldom seen on land. The men – as Iceland’s president Vigdís Finnbogadóttir remarked on one occasion when the subject arose – the men flee to their own preferred landscape, which is the sea.

Interesting. I'd never really noticed before that all the world over the word for "person who goes out into the water and brings back fish" is male in gendered languages, and not even the most ardent gender-equality advocate has yet proposed an alternative to "fisherman." There appears to be no need for it.

So what does this have to do with flies? Got me. But it's in Sjöberg's book, like so much else that isn't instantly obviously contained within the title The Fly Trap. And that's why I enjoyed the book so much. I dislike summer because summer, and I am not a huge fan of outdoorsy life because mosquitoes, but I am always up for a stroll with an interesting companion whose passion and joy is shared eloquently and elegantly with me, allowing me to make a mental shift in my own ever-narrowing scope of activity. Tomas Tranströmer, Nobel Laureate poet, blurbed this book in large part (I believe) because of moments, lovely limerant moments like this one:


Every summer there are a number of nights, not many, but a number, when everything is perfect. The light, the warmth, the smells, the mist, the birdsong – the moths. Who can sleep? Who wants to?

This work is licensed under a Creative Commons Attribution-NonCommercial-ShareAlike 3.0 Unported License.
Posted by Richard at 11:06 AM