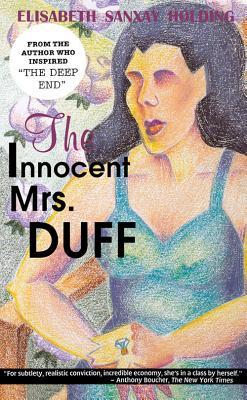 The Publisher Says: Jacob Duff has it all: A beautiful and much younger second wife, a young son, a nice suburban house a train ride from the office in New York City and a position in society he was born into that shapes him. Now one year into his second marriage, Jacob questions his decision to wed a woman he feels will never fit into his mold of the proper wife for a man of his social station, but he is cognizant that any decision he makes will face the stern scrutiny of his Aunt Lou, whose wealth Jacob will inherit upon her death. What to do....

My Review: A Canadian Book Warbler made me do it. She warbled so loudly about this book that, well, what's a mere mortal to do except give in, order one, and read the damned thing? And now, like Raymond Chandler before me, I am a fan and have several other Holding novels to read.

Boy do I owe that Canadian big for this. What a fun, exciting, and well-made psychological novel of suspense this is. I was completely riveted. Mr. Jacob Duff is our PoV character, and a more revolting, self-pitying, entitlement-driven piece of work is impossible to imagine. Mrs. Reggie Duff, young and beautiful but of a lower social class than Duff is, has a loving heart, a naive trusting nature, and a poor education. Jay Duff, scion of Duff's late wife and himself, is a typical boisterous boy and loves his stepmama Reggie a lot, while alternating between fear of and indifference to his father.

Not one of these folks will emerge from the novel unscathed. Duff the snob wants to divorce Reggie because she's not well-bred; his eccentric Aunt Lou won't hear of it, reminding Duff that he married Reggie for exactly that quality and now he needs to suck it up and deal. Whiny spoiled Duff begins to scheme, to cast about for ways and means to get his own stupid, selfish way.

In the course of doing exactly the wrong thing, Duff manages to kill, cause the death of, and/or ruin the lives of every single person in his way. He's despicable. And yet Holding writes this story, from his PoV remember!, in such a way that it's really unputdownable. I am delighted that I read this entertaining and suspenseful book.