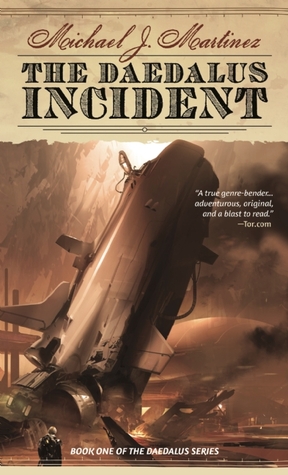 The Publisher Says: Bizarre earthquakes are rumbling over the long-dormant tectonic plates of the planet, disrupting its trillion-dollar mining operations and driving scientists past the edges of theory and reason. However, when rocks shake off their ancient dust and begin to roll—seemingly of their own volition—carving canals as they converge to form a towering structure amid the ruddy terrain, Lt. Jain and her JSC team realize that their routine geological survey of a Martian cave system is anything but. The only clues they have stem from the emissions of a mysterious blue radiation, and a 300-year-old journal that is writing itself.

Lt. Thomas Weatherby of His Majesty’s Royal Navy is an honest 18th-century man of modest beginnings, doing his part for King and Country aboard the HMS Daedalus, a frigate sailing the high seas between continents . . . and the immense Void between the Known Worlds. Across the Solar System and among its colonies—rife with plunder and alien slave trade—through dire battles fraught with strange alchemy, nothing much can shake his resolve. But events are transpiring to change all that.

With the aid of his fierce captain, a drug-addled alchemist, and a servant girl with a remarkable past, Weatherby must track a great and powerful mystic, who has embarked upon a sinister quest to upset the balance of the planets—the consequences of which may reach far beyond the Solar System, threatening the very fabric of space itself.

Set sail among the stars with this uncanny tale, where adventure awaits, and dimensions collide!

My Review: Swashbuckling naval battles against heinous French pirates! In space!! Benjamin Franklin on an inhabitable Ganymede, and an alchemist to boot!

Manned permanent habitations on Mars! Greedy corporate slimebuckets causing havoc and costing people their lives! Space bureaucracies throttling (or doing their best to, anyway) any initiative in their subordinates!

Either one of those makes a darn good yarn, a familiar-enough plot to keep the pages turning and still, in Martinez's capable hands, the yawns at bay. Both together gave me the geekgasm of a lifetime. Lt. Shaila Jain, RN, is the kind of kickass leader and quick thinker that gives young women today a chance to develop a sense of agency, owning their own power and future. It doesn't hurt that she falls for a handsome man with a French accent, and then spends the books trying to keep him safe from his own inexperience and lack of fighting ability.

Makes a nice counterpoint to 3Lt. Thomas Weatherby, RN, whose career in the 1779 Navy also takes him into space. Now the fun begins, as the alchemical nature of manned space flight in this era is revealed by the number of ways it can and does go wrong. One of those ways leads poor Weatherby to a space equivalent of the Caribbean pirate port, Port Royal, Jamaica. And there Weatherby finds a drunken alchemist who becomes his best friend and a serving wench (in more than one sense of the word) who becomes his One True Love. Unlike Jain's French paramour, though, Weatherby's is perfectly capable of kicking ass and taking names by herownself. Bit shocking to a stodgy middle-class tradesman's son who has bought himself into the higher status of the officer corps.

Among our delicious surprises is the existence of a bona fide intra-solar system alien species, the Xan of Saturn. Their colonial outpost is Callisto, again an inhabitable world unlike in our own just as amazing solar system. The Xan and their intra-solar system rivals based on Mars had the kind of war that our paltry timeline threw itself in WWI, leaving devastation on Mars, an exploded fifth planet called Phaeton (now called the Rocky Main, to our blah asteroid belt), and one Martian survivor who, for his evils, is imprisoned in interdimensional space.

Throw all this into the pressure cooker, turn the fire up high, and let 'er rip. The resulting explosive action propels every character onto a course not entirely predictable, and as the pieces of hot story fly around, a lot of painful damage gets done. But like the "self-building" pyramid on Mars, the story reassembles itself into a satisfying similar-but-different shape. If the tale isn't to your taste ::side-eye:: the resolution as it is will be good enough to leave the book as finished and whole in your mind.