Time Commences in Xibalbá, a fantastical tale of sex, identity, violence, and time 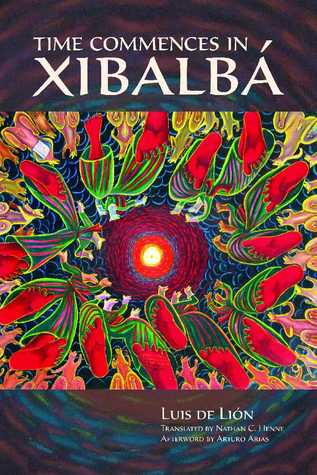 The Publisher Says: Time Commences in Xibalbá tells the story of a violent village crisis in Guatemala sparked by the return of a prodigal son, Pascual. He had been raised tough by a poor, single mother in the village before going off with the military. When Pascual comes back, he is changed—both scarred and “enlightened” by his experiences. To his eyes, the village has remained frozen in time. After experiencing alternative cultures in the wider world, he finds that he is both comforted and disgusted by the village’s lingering “indigenous” characteristics.

De Lión manages to tell this volatile story by blending several modes, moods, and voices so that the novel never falls into the expected narrative line. It wrenches the reader’s sense of time and identity by refusing the conventions of voice and character to depict a new, multi-layered periphery. This novel demands that we leave preconceptions about indigenous culture at the front cover and be ready to come out the other side not only with a completely different understanding of indigeneity in Latin America, but also with a much wider understanding of how supposedly peripheral peoples actually impact the modern world.

The first translation into English of this thought-provoking novel includes a concluding essay by the translator suggesting that a helpful approach for the reader might be to see the work as enacting the never-quite-there poetics of translation underlying Guatemala’s indigenous heart. An afterword by Arturo Arias, the leading thinker on Indigenous modernities in Guatemala, offers important approaches to interpreting this challenging novel by showing how Guatemala’s colonial legacy cannot escape its racial overtones and sexual undertones as the nation-state struggles to find a suitable place in the modern world.

My Review: Eighty-two pages of story; fifteen pages of Translator's Introduction; twenty-five pages of academic essay placing the story and the author into context for the American student.

If you're still reading at this point, you're one tough bugger. The essays are fine, if you're in the mood for academic prose and a discussion of the merits of psychosexual colonial identity theft. I think that's what it's about. The essay, that is.

I don't pretend to know what the story itself is about. Pascual, the main character, is a proper shit of a person, the village that grounds the novel is made up of silly gits, mean girls, a few sluts, one gay guy who lusts after Pascual and is called Hen, not Juan, when the two are alone.

It makes sense in context, I promise.

The village, the real purpose for the story of Pascual, is enchanted and enchanting in the traditional Latin American magical realist way. There's a wind at the beginning of the book...the description can't be excerpted, I'm not up for that much typing...and there are any number of sun-rising-in-the-west moments that make the story itself feel more like a retold folk tale than a novella. (Which this is, despite the insistence of the academics that it's a novel.)

It's a short, interesting moment in Guatemalan cultural studies. It's got some lovely imagery, and it's got copious annotations explaining the concepts that periodic Spanish words connote. It's lyrical in measure, it's beautifully proofread (and isn't it sad as all hell that I mention that in a review?), and I can't quite give it four stars because I don't feel one bit moved to learn more of these characters. I'm incurious. And a big part of that is the brevity wrought by the author's choice of length. More, please. This iteration of the tale is worthy and is even pleasurable in spots. But it just never quite reaches the empyrean blue that's clearly within the author's native grasp.

Read it, by all means, you of Hispanic-colonial descent, to learn how the Maya survived...for you of leftward-leaning politics, it's an endorsement of your smug dismissal of post-colonial guilt-shedding so in vogue. The majority of the readerly public isn't likely to clasp the book to their collective bosom.