CARE GIVER, an inside glimpse of the steady march towards nothing that is dementia 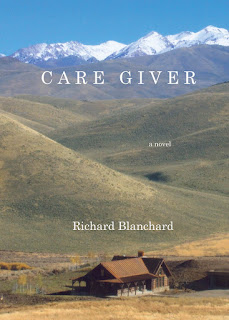 The Publisher Says: Care Giver leads us through a kaleidoscope of events as a failing old man pens unmailed letters to his lost love from a nursing home bed. A caring paperboy aids the man for a passage to his promised land, and becomes the unexpected inheritor of the man’s hallowed highlands. As the boy seeks to build his own life on those gifted lands, he too is haunted by visions of a lost soul, and finally makes ready for his own deliverance in the high peaks.

This strange story unfolds as we consider the man’s letters, the boy’s writings, and the photos and clippings all found among the boy’s belongings. If you’ve ever been troubled by someone’s incurable suffering, then read Care Giver. It is at once a testament to forbidden mercies and to the power of enduring faith. For me, it rings of the utter truth.

My Review: In the emerging literary genre of dementia fiction, this short novel stands out for its brutal, unsparing honesty of presentation. In alternating sections, too short to be chapters, Bob Brown's stream-of-consciousness narration of his deteriorating grasp on his own mind juxtaposes with the short, sibylline utterances of John Fulton, a kind-hearted and shy young paperboy who becomes the living anchor of Bob's world.

Bob writes letters, from his addled 81-year-old brain, to his long-lost love Margo Jones. The more letters he writes to her, the more we are treated to a ringside seat in the spectacle of a mind's disappearance. The mixture of times present and past is complete and the distinction, for Bob, is gone; for us, the strands of meaning are tightly twined and are mutually supportive narratives, often seeming to merge like hairs in the plaits of a braid: Tightly spaced, closely woven, touching all down their lengths, forming one constructed object and still made up of discrete parts. The book emphasizes this joined-but-separate quality of narrative with the two men's voices alternating and with the liberal use of photos throughout the book.

John, the boy who brings Bob his paper, is a shy kid of seventeen when he meets the old man. He's like all young people in that all things come back to himself in reference. He's a good man, though, because he spares moments of his life to spend with the slowly disappearing Bob. He listens. He asks questions, engages with the person before him. John straightens pillows and leaves the elder to sleep when he's been drugged and never flags in offering his precious gift of attention.

The beauty of writing this book from the PoV of the dying man and his care giver, his giver of caring beyond the physical, is wondrous. The end of the story is already known, the end is the ending...and the ending is a lovely thing. Only Bob speaks...we see the photos he cherishes enough to will them to his young best friend...we hear his letters, last ones ever, to his Margo....

This book is a lonely and frightened and confused old man's orison to the lost god of love.
Posted by Richard at 4:56 PM