A KISS FOR A DEAD FILM STAR, short fiction done with panache and verve 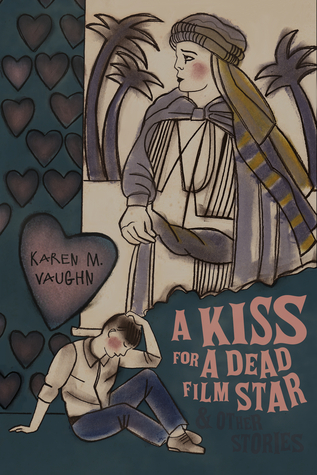 The Publisher Says: Isaac Rubinstein has no choice but to kill himself.

He’s in love with Rudolf Valentino, and now Valentino is dead. His acolytes are committing suicide all over the city. The window to definitively display his devotion is closing, and for once the New York tenement apartment he shares with his mother, his grandmother, and his siblings is quiet. It has to be now.

Unless he doesn’t, because his grandmother calls out for him right before the blade touches his skin. Unless he does, and the cuts bleed away his heart’s blood.

In Karen M. Vaughn’s romantic and darkly funny melodrama, Isaac Rubinstein does both. Dies, and is united with his beautiful Valentino. Lives, and finds a reason to live.

A Kiss for a Dead Film Star is an astonishing debut collection of stories that inspire weird love and uncover surprising caches of eroticism. A museum T-Rex fossil awakens and contemplates his existential crisis. A devoted and loving wife copes with the inevitable loss of her handsome husband with an unusual provenance when he grows scales and a tail before her desperate eyes. A woman at the nadir of a breakup hears a song in a dingy bar and becomes rapturously, gloriously pregnant with a child made from song. A lemon grove that has sheltered a family of migrant workers reveals their secrets when their small daughter removes her own arm. Polyamory, the cosmos, and the end of the world serve as the angel of death for a wry scientist at the end of her life.

Psycho-medical-magical realism intertwines with old and new New York City, epic love stories, and tales best told in the smoky alleys behind bars or beneath the covers. Karen Vaughn’s capacious imagination and remarkable voice glitter—this collection is a comet that comes around rarely.

My Review: Look at that cover. The image is naive, charming, evokes a sense of simple drawings by sincere young artists. I can imagine a young artist seeing a Chagall painting for the first time and snapping into focus at last, "I am going to do that, yes that's right and it's me." Therefore it's the perfect cover image for this collection of Karen Vaughn's meditations on identity and voyages of discovery.

"A Kiss for a Dead Film Star" is a bang-up introduction to Vaughn's world-view.


The longer Isaac worked there, the more his life began to take on a kind of duality. During the day, he steeled himself against the various constrictions of the tenement: the overachieving brother; the distant mother; the school assignments that did nothing but demonstrate to the world how unexceptional he was; even the green paint that kept appearing beneath his fingernails, as if he had been clawing at the walls in his sleep. But in the evenings—oh yes, in the evenings, everything was different. There was glamor. There was mystery. There was divine justice. It was only in this rarefied atmosphere that Isaac felt he could truly breathe, within this strange golden existence that was like a sliver out of someone else's life.

And then, in his eleventh year, the reels arrived for a film called The Four Horsemen of the Apocalypse. As Isaac watched this new leading man tango across the screen in a Spanish hat and gaucho pants—eyes darkly seductive, limbs sinuous as a panther's—he felt the gears within himself quietly shifting into place. He knew he was falling in love.

That reason to live? As honest as they come: The small things. It's the small things that make decisions for us, that influence us, that bifurcate death from life. It's a charming tale.

"Still Life with Fossils" brings us the stoic ruminations of two outsized survivors of an era dim and distant as they adjust to their new, shabby world dominated by creatures they don't comprehend and can't eat. Nothing to eat them with...and she is an herbivore anyway. He spends his afterlife making conversation with her until, as is inevitable, everything is said and there is the heaven of shared silence. A lovely meditation on how it feels to find one's soulmate.

"The Angel Appearing to Corrine"