GHACHAR GHOCHAR, an unnerving look at how success corrupts the successful 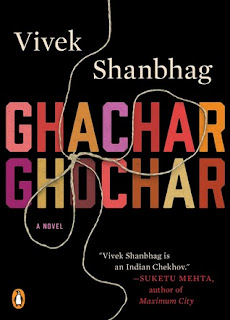 The Publisher Says: A young man's close-knit family is nearly destitute when his uncle founds a successful spice company, changing their fortunes overnight. As they move from a cramped, ant-infested shack to a larger house on the other side of Bangalore, and try to adjust to a new way of life, the family dynamic begins to shift. Allegiances realign; marriages are arranged and begin to falter; and conflict brews ominously in the background. Things become "ghachar ghochar"--a nonsense phrase uttered by one meaning something tangled beyond repair, a knot that can't be untied.

Elegantly written and punctuated by moments of unexpected warmth and humor, Ghachar Ghochar is a quietly enthralling, deeply unsettling novel about the shifting meanings--and consequences--of financial gain in contemporary India.
Longlisted for the International Dublin Literary Award
One of the BBC's "10 Books You Should Read in February"
One of Publishers Weekly's "Writers to Watch Spring 2017"
One of the NewYorker.com contributors' "Books We Loved in 2016"

My Review: India is an amazing country. Its many peoples are in constant creative ferment. Its immense democracy, largest in the world and most complex imaginable, is in turmoil at every moment and in every segment of a society that is ancient, intricate, and at odds with itself. That the country produces amazing literature is, given all these facts, unsurprising. That we as Americans are largely unaware of that literature is unsurprising, sadly. It's part of the US's long-standing resistance to reading translations at anything like the rate that other countries' readers do. I hope that trend will change as the millennials grow into their armchair-and-novel years.

I am a sucker for rags-to-riches stories. It's almost always interesting to see how changing fortunes reveal true character. The Man in the Gray Flannel Suit and Revolutionary Road are classics for a reason. Our unnamed narrator is the son of a starchy, honorable man whose hard work has enabled the family to survive without hunger but also without luxury. Amma and Appa and Chikappa (Appa's younger brother), the three adults, are always frugal and sensible with their spending, and the children...sister Malati and the narrator...absorbed this quality without any need to formally teach it.

When Chikappa rises to the occasion of Appa's forced retirement from his job by proposing the family start a spice-packaging business, their fortunes change rapidly and upwards on the economic ladder. The result is a classic clash of expectations:


Appa enjoys our current prosperity with considerable hesitation, as if it were undeserved. He’s given to quoting a proverb that says wealth shouldn’t strike suddenly like a visitation, but instead grow gradually like a tree.

Appa's attitude is at variance from everyone else's. His deeply ingrained suspicion of luck is absent from the free-spending rest of the family. Well, Chikappa isn't profligate with anything except his time, which he lavishes on his business. He no doubt is motivated by memories of the old standard of living the family endured:


It didn’t seem like [the ants] were here to find food. Nor did they have the patience to bite anyone. Left to themselves, they’d quickly haul to particles of mud and built nests here and there in the house. You could try scuttling them with a broom, but they’d get into a mad frenzy and climb up the broom and on to your arm. Before you knew it, they’d be all over you, even under your clothes. For days on end there would be a terrific invasion, and then one day you would wake up to find them gone. There was no telling why they came, where they went. I sometimes saw them racing in lines along the window sills in the front room, where there was nothing to eat. Perhaps they were on a mission of some sort, only passing through our house in self-important columns. But not once did I see the trail of a column, an ant that had no other ants behind it.

That's a wonderful image, the column of invaders with no tail in sight. The endless demands of life for more when all that you have is fixed or shrinking:


We had no compunction toward our enemies [the ants] and took to increasingly desperate and violent means of dealing with them. If we noticed they'd laid siege to a snack, we might trap them in a circle drawn with water and take away whatever they were eating, then watch them scurry about in confusion before wiping them off the floor with a wet cloth. I took pleasure in seeing them shrivel into black points when burning coals were rolled over them. When they attacked an unwashed pan or cup they'd soon be mercilessly drowned. I suppose initially each of us did these things only when we were alone, but in time, we began to be openly cruel. We came around to Amma's view of them as demons come to swallow our home and became a family that took pleasure in their destruction. We might have changed houses since, but habits are harder to change.

When you have little, protecting it becomes justification for any act.

One of the many besetting issues in Indian culture today is violence against women. I'm always appalled at the notion of rape, and the act itself is heinous beyond belief. The scope of violence against women in the immense cultural landscape of India is so much wider than just rape that it causes a kind of paralysis in my thinking. Our unnamed narrator's arranged marriage is strange to me, given the absence of such a tradition in modern American culture; but it begins so well, so promisingly:


That single moment's intensity hasn't been matched in my life before or since. A woman I didn't know had chosen to accept me, in body and mind. Perhaps it is this instant that forms the basis of traditional marriage—a complete stranger is suddenly mine. And then, I am hers, too; I must offer her my all. I want her to wield her power over me as an acknowledgment of my love. The rush of those feelings all at once is too much to describe. Language communicates in terms of what is already known; it chokes up when asked to deal with the entirely unprecedented.

That's an entire experience I can't fathom, but Shanbhag's description enables me to get a handle on the positives that could ensue from such a contract. That Anita, the bride, comes to the family without a dowry is made explicitly a source of conflict. Amma announces to Anita's parents that their prosperity means the family will not be asking for a dowry; Anita's father, an academic and modern thinker, says he would not have given his daughter to them had they demanded a dowry.

That made me pause. "Give" his daughter to them? Yes, vastly superior to the notion of selling her for a dowry; but give her to them? Clearly I have a lot of learning to do. The concept...it's so foreign that I can't wrap my head around it. But it's this very subject that sets up the book's intense cliffhanger ending, which to this moment gives me heebie-jeebies. It's such a tightly written book that ending on a cliffhanger should be grounds for complaint from chronic ending-moaner me. Not so in this case. It's exactly the right note to strike, and it keeps the book resonating inside my skull.

I don't suppose that should surprise me, really, as the author offers this insight into the art and science of translation:


I believe the essence of translation lies in taking what is unsaid in a work from one language to another. Words have memories, a history of their own. There are no two words with exactly the same meaning. To recreate the unspoken in another language, one needs to understand what went into making the original; then one must dismantle it and rebuild it in the other language.

Someone who sees so very clearly the purpose of writing is someone who can be trusted to create a book's proper ending. I cannot wait for Shanbhag and Perur to finish his next English translation. I'll be first in line at the till, waiting only to get coffee and snacks before diving in to the next exploration of story and meaning.
Posted by Richard at 6:30 AM