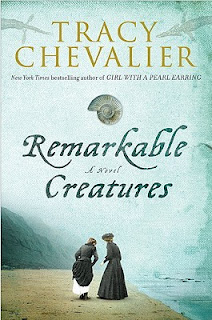 From the moment she's struck by lightning as a baby, it is clear that Mary Anning is marked for greatness. On the windswept, fossil-strewn beaches of the English coast, she learns that she has "the eye"—and finds what no one else can see. When Mary uncovers an unusual fossilized skeleton in the cliffs near her home, she sets the religious fathers on edge, the townspeople to vicious gossip, and the scientific world alight. In an arena dominated by men, however, Mary is barred from the academic community; as a young woman with unusual interests she is suspected of sinful behavior. Nature is a threat, throwing bitter, cold storms and landslips at her. And when she falls in love, it is with an impossible man.

Luckily, Mary finds an unlikely champion in prickly Elizabeth Philpot, a recent exile from London, who also loves scouring the beaches. Their relationship strikes a delicate balance between fierce loyalty, mutual appreciation, and barely suppressed envy. Ultimately, in the struggle to be recognized in the wider world, Mary and Elizabeth discover that friendship is their greatest ally.

Remarkable Creatures is a stunning novel of how one woman's gift transcends class and social prejudice to lead to some of the most important discoveries of the nineteenth century. Above all, is it a revealing portrait of the intricate and resilient nature of female friendship.


My Review: A middling book about interesting times and people. Not extraordinarily well, or poorly, written. Not unusual or original in plotting or in, frankly, any way I can think of. Like all of Chevalier's work, a solid, well-made entertainment, about a subject most of us have never given one instant's thought to.

Therein its charm. Mary Anning and Elizabeth Philpot weren't the women of Jane Austen's novels, and they weren't subjected to the same constraints as those women were. They lived in poverty whether genteel or grinding, and they followed their own interests instead of doing what was thought to be necessary to get a husband. Chevalier points up the ways in which this freedom made the women best able to pursue the passions each might never have known had she been a mother and a wife.

We owe our knowledge of plesiosaurs and other aquatic beasts of the era to these remarkable women, who hunted for and preserved fossils along England's Dorset coast. That Mary Anning was the more productive of the two and that it was she who found the major finds does not minimize the better-off Miss Philpot's many contributions, both emotional and financial, to the process.

In the end, it is the usual suspect, jealousy, that ends the friendship across a generation and a class divide. Mary Anning and Elizabeth Philpot fall in love with the same man. It leads to the eruption of their other jealousies, of course, and the many things we think but never say come out of each woman's mouth.

Years pass, and many events occur, but unlike theirs, endings are only rarely as good as beginnings. Anning and Philpot lived in a time when the role of a woman was to be of service. Neither had a man to serve, so they served Mankind with their old rock-boned beasts. Much of what we think today would have been harder and later in coming without them, their small but vital role in making modern science what it is.

Remarkable creatures indeed.
Posted by Richard at 6:30 AM