THE BALLAD OF BLACK TOM, a Cthulhu mythos delight 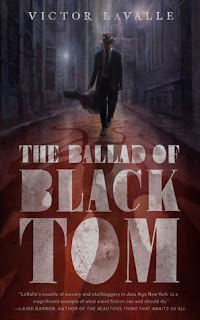 The Publisher Says: People move to New York looking for magic and nothing will convince them it isn't there.

Charles Thomas Tester hustles to put food on the table, keep the roof over his father's head, from Harlem to Flushing Meadows to Red Hook. He knows what magic a suit can cast, the invisibility a guitar case can provide, and the curse written on his skin that attracts the eye of wealthy white folks and their cops. But when he delivers an occult tome to a reclusive sorceress in the heart of Queens, Tom opens a door to a deeper realm of magic, and earns the attention of things best left sleeping.

A storm that might swallow the world is building in Brooklyn. Will Black Tom live to see it break?

My Review: If I make a criticism of this wonderful story, it's the author's choice of the novella form to tell it.

My critique (meant to be a helpful form of criticism, the latter of which leaves no room for action or explanation) is (spoiler: that Charles Thomas turned into Black Tom offstage and in a convenient hurry, which is also:/spoiler) about the issues that in part arise from that choice of form.

Author La Valle's tasty new twist on the Cthulhu mythos is an example of later creators using the source material better than the original creator did. This story even nods to the man from Providence himself! I've left a wide swath of ten notes on highlights and they should all be read as part of this review.

I particularly admire Author La Valle's depth of characterization in the limited space of a novella. Otis, Thomas's father, in particular comes to more vivid life in his short time on the age than he would have in the weaker, less passionate grip of a lesser writer. The evocation of Red Hook's louche miasmic atmosphere was shivery good; the notion of Flatbush as countryside where cottages and even a run-down mansion could exist, and mentions of "rural Brooklyn," left me verschmeckeled but in that time were plain old facts.

And now for the truly, unspeakably, beyond-Lovecraftian terror contained in this work: AMC is making a TV series out of it in 2018.

Be very, very afraid.
Posted by Richard at 1:08 PM