BANDERSNATCH, a group portrait of the Inklings 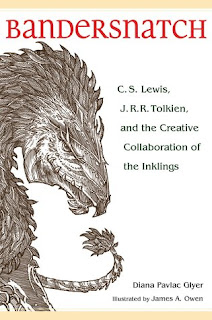 The Publisher Says: C.S. Lewis, J.R.R. Tolkien, and the Inklings met each week to read and discuss each other's work-in-progress, offering both encouragement and blistering critique. How did these conversations shape the books they were writing? How does creative collaboration enhance individual talent? And what can we learn from their example?

Featuring original illustrations by James A. Owen, Bandersnatch offers an inside look at the Inklings of Oxford, and a seat at their table at the Eagle and Child pub. It shows how encouragement and criticism made all the difference in The Lord of the Rings, The Chronicles of Narnia, and dozens of other books written by the members of their circle. You'll learn what made these writers tick, and more: inspired by their example, you'll discover how collaboration can help your own creative process and lead to genius breakthroughs in whatever work you do.

THE PUBLISHER PROVIDED A REVIEW COPY AT MY REQUEST. THANK YOU.

My Review: Author Glyer is a past mistress of explication, as witness her previous Inkings study The Company They Keep. That book was more about who, when, and where among the English old boys' club we know as the Inklings: JRR Tolkien, CS Lewis, Roger Lancelyn Green, Owen Barfield, Hugo Dyson, et alii. This book delves into the how and the why of the Inklings' writing community. If literary criticism isn't your jam, this book will bore you silly. If you've never read any literary criticism, I'd encourage you to start here. Author Glyer is a dab hand at writing and a scholar to be reckoned with, two things that don't frequently coincide.

So the sugar coating is the story of the Inklings, two of whom became internationally famous for the works they made in this writers' group for the ages. The meat of the tale is, though, how this incredible group *failed* its members. Tolkien, for example, was subjected to humiliating and deeply personal insults by Hugo Dyson who detested his elves and orcs and such-like goins-on; Lewis did as well; but Lewis was quiet while Dyson was not and, in the cumulative effect of one noisy nastymonger on a group, Tolkien was driven to silence.

In a group of writers wanting to make their art better, that is Death. Shameful that it should have been allowed. And let's not fail to see the irony of the insulter being utterly and completely forgotten by History while the insulted literally changed the world.

Author Glyer offers a few prescriptions for the potential breeding grounds of today's Tolkiens in consideration of her analysis of the Inklings' failures. They are trenchant and they are excellent. If I have a grump with the book, it's the revolting Jesusy tone of a lot of it. It's inevitable, I suppose, given the endemic, emetic christianity of the group's members. I found I could read the book, not usually the case with Jesusy stuff, because it was so much more than a tract.

One facet of the book that stands out, and that merits an entire review of its own, is the beautiful illustrations by James A. Owen. The cover illustration should give you the tone Owen takes throughout the book. These are beautiful artworks and could be reason enough right there to buy the book, simply to make your eyes happy and your heart glad.
Posted by Richard at 6:30 AM