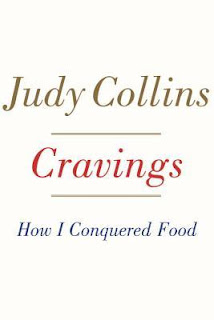 The Publisher Says: Since childhood Judy Collins has had a tumultuous, fraught relationship with food. Her issues with overeating nearly claimed her career and her life. For decades she thought she simply lacked self-discipline. She tried nearly every diet plan that exists, often turning to alcohol to dull the pain of yet another failed attempt to control her seemingly insatiable cravings.

Today, Judy knows she suffers from an addiction to sugar and grains, flour and wheat. She adheres to a strict diet of unprocessed foods consumed in carefully measured portions. This solution has allowed her to maintain a healthy weight for years, to enjoy the glow of good health, and to attain peace of mind.

Alternating between chapters on her life and those of the many diet gurus she has encountered along the way (Atkins, Jean Nidetch of Weight Watchers, Andrew Weil, to name a few), Cravings is the culmination of Judy's genuine desire to share what she's learned--so that no one else has navigate her heart-rending path to recovery.

THE PUBLISHER SENT A REVIEW COPY AT MY REQUEST. THANK YOU.

My Review: A lifetime spent in and out of the limelight, a lifetime of performing for audiences who cheer and boo and ignore, but performing all the same, always always putting her best out there...an enviable life, no?

Not always. Judy Collins made her voice her fame, and when it became harder for her to perform it became another self-lacerating weapon in her battle with her body. Her diets and plans and struggles with her addictive personality are carefully presented here as *personal* struggles. Collins isn't preaching, she's giving witness to the struggle she knows many others go through. That technique is very much more effective than would be another guru prescribing actions and dictating methods for achieving the goal of being in control of one's own body.

I'm also very appreciative of the quite interesting stories behind the gurus whose dictates Collins frequently failed to follow. I found these to be some of the most useful parts of the book, as the motivations of Saviors are almost always excellent means for demythologizing and even debunking the gurus' sacred words. I hasten to add that Collins isn't out to make people feel bad or wrong about their struggles or their need for advice. She just has clear eyes when it comes to the whys of the whats of dieting.

The reason I'm not more generous with my star rating really comes down to one issue: The conquest of Collins's food addiction is so complete and so thoroughgoing that I am left with deep doubts. I don't think she's lying to me or even to herself; I think she's got an iron will forged through a generation-long struggle to control her body. What I question is the declaration of victory over something that's a fundamental part of her identity. She says she's a food addict but she's beaten it. That doesn't scan for me. I'm also not 100% Team Judy on the means by which she's conquered her food addiction, as it's *impossibly* restrictive and simply impossible for a person without her considerable financial and social resources to emulate.

This is, to me at least, the principal failing of all eating-disorder diet nutrition etc etc books. Fine great and wonderful if you're upper middle class and up, have money, servants, time at your disposal. Useless and, worse, counterproductive if you're a 60-hour-a-week wage worker whose paycheck is never quite enough, has kids, a spouse, and no one to do diddly squat for them.

That said, if you're not a desperate soul seeking a way out of the addiction trap, this is a sprightly and involving and educational read. I liked the experience of reading it quite a bit.
Posted by Richard at 6:30 AM