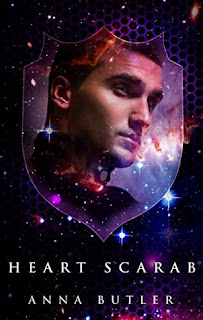 The Publisher Says: Shield Captain Bennet is on Telnos, a unpleasant little planet inhabited by religious fanatics and unregistered miners running illegal solactinium mines. It’s about to be about to be overrun by the Maess. Bennet’s job is to get out as many civilians as he can, but the enemy arrives before the evacuation is complete. Caught in a vicious fire fight, Bennet is left behind, presumed dead.

His family is grieving. Joss, his long-term partner, grieves with them; lost, unhappy, remorseful. First Lieutenant Flynn has no official ‘rights’ here. He isn’t family. He isn’t partner or lover.

All he is, is broken.

My Review: Author Butler takes us deeper into the life of Shield Captain Bennet, eighteen months following the events on Maess-held planet T18 and on board the Gyrfalcon. As Bennet performs his duty to evacuate illegal religious-fanatic colonists on Telnos, soon to be behind Maess—the faceless, unknown aliens winning a war of annihilation against humanity's great-to-the-10th-power grandchildren—lines, he obsesses over his failing relationship with his elegant, worldly lover Joss; his burgeoning love for Pilot Flynn stationed on his father's ship the Gyrfalcon; and his patient, long-suffering Lieutenant Rosie listens to him and moons and pines for him completely unheeded, unnoticed, unconsidered for the position she (along with the rest of humanity, I'd guess) craves: Bennet's lover.

But that's just the beginning of Bennet's troubles at Author Butler's hands.

And that's why I read space opera: Pile the troubles on with the highest-possible stakes! Then make the stakes personal! Then by gawd create some scary aliens with a baseless grudge and an attitude, some super-advanced tech that is actually just like what we have now on steroids so I can get it without over-physics-ing my brain and thereby losing propulsive interest in the story.

Why I read this space opera is simple: gay guy. Bennet flies in the face of humanity's one apparently eternal character flaw, religious belief, to live his truth as a man who loves men. Add to that his father's strong religious convictions and his family's long tradition of the apparently eternally homophobic military service, his older lover's patrician disdain for exactly *how* his luxurious lifestyle is maintained, and military anti-fraternization rules that Bennet takes very seriously and that prevent him from pursuing his new love for Flynn, and you have a witches' brew of good drama.

Still very little sex. Very little indeed. And what there is is non-graphic by today's standards. More than in Gyrfalcon, I think, though I haven't done a statistical analysis. I can assure the eww-ick squeamish that no unpleasantly meaty words are used and with a small effort of intentional misunderstanding the import of the few sexual scenes can be contextualized as emotional intimacies that can't be expressed in any other way without falseness. Who here hasn't had what you *knew* was break-up sex while pretending the pleasures of a familiar touch were, after all, enough? Yeah, me too, and so does Bennet when the flypaper and prayers that've kept Joss in his life finally blow apart under the final assault: Death.

Bennet, you see, has the bad taste and rude vigor to return from the dead. It's just...unseemly. And after Joss, in the manner of their people, has made sacrifices of his and Bennet's treasures, some of the perfect and glorious antiquities Joss (archaeologist by training) offered up to the gods for Bennet (ancient historian by academic training) to use in the Field of Reeds, back comes Bennet hale and hearty and not in the Field of Reeds at all! The...the...joy? embarrassment? confusion? of it all.

And that "hale and hearty" is solely a valid description when matched against "dead and rotting on an alien-held planet." Bennet is in shards, physically and psychically and emotionally. His body will heal slowly, his psyche and emotions might or might not heal at all ever, and he might well never get to use his new bionic knee back in his deeply loved Shield role. A soldier who's too broken to soldier is by definition A Very Unhappy Man. Add to this soldier's woes the emotional mismatch between himself and his partner. The immense, irresistible force of falling in love with the right one. The awful reality of wartime military service meaning unavoidable separation from your lover.

I will say my wish (expressed in my review of Gyrfalcon) to get to sympathize with poor overmatched Joss came true. I was sad for him as he was hollowed out by loss and the hideous, regret-charged acid bath that is grief. All the times one falls short, one is unkind impatient unwilling to understand or empathize...oh gods and goddesses those will keep a soul awake and agonized as they replay unchanging and unchangeable in the darkness! But far more painful is the way they play out like movies on a screen while living, breathing people are making noises meant to distract—console—reach you when you are in the locked projection booth of your failings as the movie of your life replays in an endless loop.

Yes, Joss, I know that one. Author Butler was cruel to you. Goodness knows you deserved it, but...well...don't we all.

And the ending of this story is fascinating. It is unusual within the genre of gay-male-centered fiction. I will read the next installment of Taking Shield, called Makepeace, as soon as I've caught my breath and begun to accept the changes wrought on my feelings already.

Which, if I need to say it, is the hallmark of a really good read.
Posted by Richard at 7:30 AM