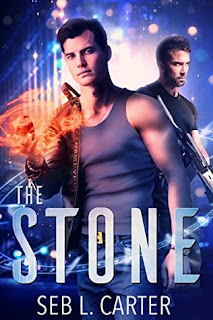 The Publisher Says: A stone holds an ancient secret—and the key to present-day terror.

A murder-suicide was only the beginning.

Seven years ago, Liam’s father picked up a gun, killed his family then himself. Liam was left behind to carry the burden and the guilt.

Now Liam only wants to finish college and live a normal life. But when he is handed a stone, a stone that appears plain, he is catapulted into an unknown world of mystery and magic…

A CIA agent finds himself a part of something with more secrets than the government he works for.

Patrick possesses a psychic ability to find people. Coerced to find Liam, their first meeting reawakens an ancient connection. Together, they find themselves in the midst of a culling, the destruction of a secret society formed millennia ago.

Destiny unites a group of strangers to face an antediluvian evil that has the world as its prize.

The Stone is a paranormal, urban fantasy adventure that involves a secret agent, a law man, and a gay guy who becomes a hero.

This novel features an LGBT relationship with a low-heat romantic subplot.

THE AUTHOR PROVIDED AN E-ARC FOR MY REVIEW. THANK YOU.

My Review: I don't see much Irish mythology used in fantasy literature, pace Kevin Hearne. And don't mistake me, I love Atticus and Oberon, but they need more company. One problem with folks wanting to use Irish mythology is, I am surprised to learn, its decentralized nature. How Irish, to resist any attempt to codify, regularize, organize its story culture.

And ain't that grand! It gives Author Carter a pretty damn free hand with his world-building, and that is a really good thing. Carter's free hand is played really, really well. The Irish gods and goddeses, the fabled TirNaNog, all used well as both background and setting for the scary action of the story.

What I will say is that the author needed a copy editor as well as a conceptual editor. I hope the current Kindle files are corrected.

So there's this kid named Liam. He's a super-survivor, both of a mass murder and suicide. He's living a pretty ordinary young gay man's life in Chicagoland, going to school, hanging with his buds, his BFF the beautiful and damaged young woman whose wisdom is among his anchors. His aunt, the woman who raised him after his father murdered his entire family in front of his unbelieving eyes, is his other anchor. He chairs a local suicide survivors' meeting as a way of coping with the overwhelming depression that he barely surfs the curls of.

And then comes Patrick. Well, first comes a looney old homeless guy who stalks him, gives him a weird stone, and dies in front of him (seems to be a trope with this guy, huh?); then comes Patrick the Navy SEAL/CIA agent. Hot, hunky Patrick of the many skills. Sadly, included among the skills is a deep familiarity with how to make people die. Of course, first Patrick has to find them, and he's *very* good at that...too good for it to be chance or coincidence. Hmm. And Patrick's been—incentivized—to find Liam and, well, enough about that.

So Liam meets Patrick and KER-BLAM instalove complete with magic peen! A romance cliche if ever there was one. Ah, ye of little faith. There's method in Author Carter's madness, there is. For Liam is suddenly the Hot Young Thing in the sights of all sorts of people! They are sliding out of the woodwork to get them a piece of Liam. Strangers of astounding physical attractiveness, not just Patrick; strangers who make Liam's skin crawl and provoke violence from him that he had never ever considered himself capable of.

And then there's that magical, mythical side of the story, replete with monsters out of myth and very, very bad hombres with end-of-the-world-y notions that involve all kinds of bloody horrors, families whose sole purpose it has been to keep the bad hombres in their place on the other side of a magical veil, gorgeous men with mystical knowledge galore, and the FBI.

Yep, that FBI. An agent whose role and relationship to Liam and his newly discovered magical side is as yet undefined, but guaranteed to be more than it seems. This is a first-in-series book, so Author Carter is doling out knowledge as you need to know it, but you can't have read for as long as I have and not see the writing on the wall. Agent Zach, Liam, and Patrick are not through with each other, and their connections are not going to be of the simple, straightforward ilk.

Now about the gay male romantic plot. It's there, and it does involve mild sexual content. I do mean mild. Straight readers will only wince if they're eww-ick homophobes. Gay readers won't want to blink too often or they'll miss it. This is, to me at least, a good thing because the love is there for a strong reason and the sex is, as of now, secondary. The sad truth is that I want to shake Liam and shout at him, "just fucking TALK to the man!" And I was practically beating my Kindle on sharp corners as I watched Patrick fuck things up without seeming to think about consequences, which for a covert operator to do stretched my credulity hard.

But this, laddies and gentlewomen, is the first book in a series. There's time for the author to stop using lazy-person tricks and get to the real sources of conflict between our young men. *pointed stare*

He can't do that, though, if we don't buy his book. Give this to your GBFF who devours fantasy! Give this to your teenaged cousin who can't quite come out yet...there's a scene that'll scare him or her into not wasting time and looking around at the adults in his/er life with new eyes. It's also a good idea to read it yourself, because, well, how do you know how good it is until you absorb its ideas and tells yourself? I recommend it.
Posted by Richard at 6:30 AM