THE DREAMING STARS, second of a series I like better and better as I read along 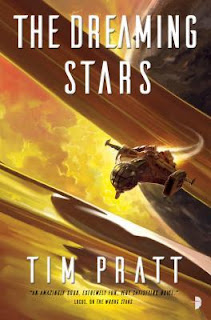 The Publisher Says: Ancient aliens, the Axiom, will kill us all – when they wake up. In deep space, a swarm of nanoparticles threatens the colonies, transforming everything it meets into computronium – including the colonists. The crew of the White Raven investigate, and discover an Axiom facility filled with aliens hibernating while their minds roam a vast virtual reality. The treacherous Sebastien wakes up, claiming his altered brain architecture can help the crew deactivate the swarm – from inside the Axiom simulation. To protect humanity, beleaguered Captain Callie Machedo must trust him, but if Sebastien still plans to dominate the universe using Axiom tech, they could be in a whole lot of trouble.

CONSIDER EVERYTHING IN THIS REVIEW A SPOILER FOR THE WRONG STARS, REVIEWED HERE.

My Review: While 500-year-old time-tossed refugee Sebastien wasn't a great friend to Humankind in his Axiom-enhanced state, he also wasn't as powerful as an actual Axiom being...and still the crew of the White Raven kept him alive because their adopted crewmember and the other 500-year-old time-tossed refugee Elena asked them to...and now we're about to find out if that was really such a good idea.

Does anyone really know the secret truth of another being? It's an ancient question and it's been answered...no, it's not possible...many times and in many ways. Why, then, do we as a species keep asking it? Because it's endlessly fascinating? Why should smacking your nose into a plate glass window at speed be fascinating?

Dunno, but it is.

So here we are, not long after The Wrong Stars ends, picking up the pieces of life as the White Raven's crew has been living it after the upheavals of discovering a Goldilocks ship, a genocidal alien race's existence and plans, and the real reason the Liars lie. Also the real reason the Free, or religious Liars, both lie and refuse to speak anything but the truth. (It makes sense in the books.) Callie and Elena are rockin' the relationship game. Stephen's his usual lugubrious self and even more so—he's lost his Church of the Ecstatic Divine congregation after all—but he's no slacker, he's busy trying to put Elena's ex-crush object Sebastien's brain back together in the new home base that the White Raven won off the space pirates they were hired by the now-destroyed Meditreme Station "government" to...well...deter, which in practice meant get them killed. It has a souped-up version of virtual reality, and Elena goes with him into Sebastien's head as they endure iteration after iteration of the man's megalomaniacal, unfettered-by-empathy actions to kill the crew that saved him.

After we get a high-concept comedy scene of Callie returning to the Jovian Imperative's coolest, most gentrified-Portland of a moon, in order to crash her funeral, the action commences. Her ex-husband (after recovering from the shock of seeing her in the flesh for the first time since his actions ended their marriage—and at the funeral he's hosting for her no less!) needs White Raven's unique skill set to accomplish something his corporate drones can't. What's causing shipload after shipload of company employees to vanish in the Owain system? The local old-timey bohemian hippie trippers aren't doing it, they've lost some of their own people.

Callie and the crew need money. Callie doesn't hate the ex anymore since Elena busted down the closet door and dragged her out. The ex is part of a family corporation that has more money than God. We'll take the job, says Callie, and thanks for the spiffy funeral.

In the course of setting up the main conflict of the book, we're back into the same group of characters that we had in The Wrong Stars. A similar quest is run, in that we have to deal with the Axiom's universe-domination fetish, not unexpectedly, but with some surprising new stakes added plus a super-dooper uber-cool new playground to duke it out on.

And here we come to my main source of deep satisfaction, my enhanced appreciation for the world Author Pratt's going for. At every turn the Axiom are godlike in their technological achievements, but still their bestial selves; their Achilles heel is their animal nature and it can be exploited even by the "suffering slime," their charming pet name for the technologically inferior beings that clutter up their Lebensraum. The Final Solution that we thought we were appalled by last book? Ha! Small potatoes compared to the revelations in this book.

When an author plays in the much-churned sand of the "xenocidal aliens with humanity in their sights" sandbox, I appreciate some effort being made to titillate me with novelty. Author Pratt gives me the gift of characters working out their deep truths. Callie, the domineering captain, also has an emotional side: Elena is her little lost waif in need of rescue plus the ex who banged up her heart by banging his boyfriend in their bed while she was self-centeredly off flying the spacelanes for adrenaline rushes that she still can't do without. Stephen the XO-cum-doctor, whose world blew up not once but twice, and whose response was to turn back to the comforting arms of Mother Church and lose himself in the designer-drug sacraments that both connect him in loving communion to all the universe while dulling the acute agony of individual loss and grief. These aren't mere cardboard cutouts, these are well-realized characters with important things to offer the reader. Their individuality is their weakness, their brokenness, and in time their greatest and strongest weapon.

The battle between the motley crew and the xenocidal aliens is played out in a virtual reality with enhancements that are as far beyond the VR Callie and company are accustomed to and the VR Elena and Sebastian know from 500 years back. The beings in this VR are self-aware. They experience themselves as we do, they are possessed of inner lives and self-awareness; the Axiom couldn't enjoy torturing and murdering them otherwise. And that's mostly what the Axiom are doing in their space station beyond the asteroid belt of Owain's system. They're playing the equivalent of video games while their meat-bodies slumber in a perfect stasis, awaiting a cosmic-era-long program to run in order to accomplish a truly, amazingly vile thing. The only reason Callie and company know about it is that the game needs an expansion module and the way that this is added involves the death of Planet Owain. Omelettes, eggs....

Sebastien is central to the crew's plans to stop the Axiom because he's been co-opted by them before and therefore has insight into the workings of these cosmic scumbags's minds. Callie trusts him about as far as she can throw him, but he's a useful tool...a thing that Sebastien is now bitterly accustomed to being. How he comes out of the battle is a major source of satisfaction for me as it involves his deepest character traits surfacing, changing the entire future in the process. Callie and Elena can finally agree on Sebastien's future and not have to compromise for the other's feelings.

The crew of the White Raven alters in composition and in character, the threats are neutralized but this is only the beginning of a much larger, more important struggle. The battle and resolution in the Dream, as the VR is called, and in Owain's system, and in the galaxy at large, are not really over. The game is afoot.

I'd like to mention the ending of this book in a most approving way: It gave me chills. I see a pattern developing that I'm not sure I'll like, if it plays out as I think is almost inevitable it will; but the last line of the book gave me horripilation. To my own surprise, I'll trust Author Pratt to deliver the goods.
Posted by Richard at 1:45 PM