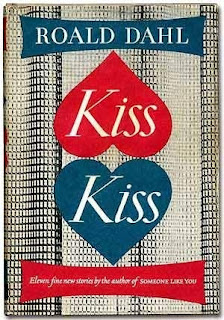 The Publisher Says: In 1953 the publication of an unusual volume of stories called SOMEONE LIKE YOU was greeted by The New York Times Book Review with these words:
"At disconcertingly long intervals, the compleat short story writer comes along who knows how to blend and season four notable talents: an antic imagination, an eye for the anecdotal predicament with a twist at the end, a savage sense of humor suitable for stabbing or cutting, and an economical, precise writing style. No worshiper of Chekhov, he. You'll find him marching with solid plotters like Saki and O. Henry, Maupassant and Maugham. ... The reader looking for sweetness, light, and subtle characterization will have to try another address. Tension is his business; give him a surprise denouement, and he'll give you a story leading up to it. His name in this instance is Roald Dahl."

In KISS KISS, Roald Dahl has collected eleven new stories every bit as entertaining as the now famous "Taste," "Lamb to the Slaughter," "Skin," and the other stories that made SOMEONE LIKE YOU so memorable.

Actually, ever since his stories first appeared in the United States, people have been retelling each other, in club cars and at dinner parties, Roald Dahl's sometimes shocking and always unpredictable plots. The stories in KISS KISS are no less haunting and no less brilliantly told. We guarantee you'll be dining out on "Royal Jelly," "Parson's Pleasure," "The Landlady," "Mrs. Bixby and the Colonel's Coat," and the others, for a long time to come.

THIS BOOK WAS BORROWED THROUGH MY LOCAL LIBRARY'S I.L.L. PROGRAM. THANK YOU!

My Review: A cruel and demanding husband, or so his first wife Patricia Neal would have us know; a creepy old party, as Charlie and the Chocolate Factory amply demonstrated, with a great deal of disdain for Jewishness and gluttony and greed in general. His adult fiction is largely out of print in the US, and he was never really quite The Thing here as he was in Britain. I suppose his light sneers at us, so evident in his attitude towards the US's involvement in the Second World War, prevented his eventual literary rise from gaining the same boost as it did among the countrymen who saw, heard, absorbed his flying prowess and spying nous.

I decided to read this collection for some reason or another (maybe it was the 1960 Edgar-winning story?), I can't honestly recall why now. I know that I began to regret my decision as early as "William and Mary," the second story, wherein this is from the text of a letter written by Dahl as coming from beyond the grave of a man to his newly-widowed wife of thirty years:


"He is a magnificent neurosurgeon, one of the finest, and recently he has been kind enough to let me study the results of some of his work, especially the varying effects of prefrontal lobotomies upon different types of psychopath."

And then he goes on to give orders like "don't get a TV" and "disconnect the phone because I don't need it anymore"! How appalling. Sixty years ago, when this collection was published, that wasn't, whole and entire, a horrendous thing to say? I'd say it was, but I was a babe in arms at the time and have no direct knowledge of the way it would sound to the era's denizens. I suspect it wouldn't have raised an eyebrow on either of my parents, but they were right wingnuts and often didn't hear things that made, and make, my skin crawl.

At any rate, I deploy the Bryce Method and report my ideas, lightly smoothed out or plucked and shaved, story by story:

The Landlady is a shivery psychological horror story. It's obvious, but it's obvious dressed in its Sunday best with a lovely Easter bonnet on it. Poor Mr. Wilkins...Weaver! Heh, Weaver. Only seventeen, but I'll bet he was as unblemished as the twenty-eight-year-old Mr. Temple. I was really pleased to make the landlady's acquaintance.

This story won the 1960 Edgar Allan Poe Award for short fiction, and I certainly see why.

William and Mary is exactly like I imagine meeting Dahl would have been in life: A thoroughly awful man stomping on a wishy-washy woman; suddenly, in a bizarre twist, he's at her complete mercy; the horrors of his past are about to be visited on him. I'm NOT sorry, William; I AM surprised, Dahl, that you knew you were awful but kept on being like that. People always surprise & disappoint simultaneously.

The Way Up to Heaven is another story of refined cruelty getting its comeuppance. Not very well thought out, this collection, two of these stories back-to-back. The wife avenging herself on the horribly controlling man she's spent so many years serving is shown so carefully to be making a choice, to be thinking through the pettiness of her debasement, and deciding to stop it now, that I could not but cheer her on. Probably my second-favorite story in the collection for her hard-won celebration of her freedom.


"It was nothing much–just a tiny vellicating muscle in the corner of the left eye, like a secret wink–but the annoying thing was that it refused to disappear..."

1) vellicate. transitive verb. 1 : to twitch; to cause to twitch. Love, love, love this new-to-me word.
2) The w-bomb stinks even here.

Parson's Pleasure elevates the comeuppance of a venal little grifter to a National Tragedy.

Chilling. Proof that Dahl understood horror, had the touch of a master with it; leave before you can say too much and be invited back, as the old, old advice goes.

Mrs. Bixby and the Colonel's Coat is a yucky, misogynistic piece of merde that opens with a meditation on how women own most of the wealth in the US via death and divorce; continues with a shabby little deception to hide a wife's affair; then ends with the unfaithful wife forced to lose her lusted-after mink coat to her husband's secretary/mistress. Terribly funny in 1959, I'm sure. (Not.)

A deeply unsettling story, well told, with all the right eerie beats. Unquestionably the best story in this collection, hands down.

Georgy Porgy doesn't suffer from the disconnectedness inherent in third-person narration, that's for sure. The Vicar was traumatized by the birth & subsequent cannibalistic end of a baby rabbit when he was a child; now he narrates his middle-aged celibate's determination to avoid the snares of his lustful female parishioners. Funny how hard they work to get him to see them as desirable; Miss Roach most signally succeeds in "luring him to his doom" as it were.

We see the fallacy; the outcome is inevitable. George, you bad, bad boy.

Genesis and Catastrophe: A True Story is one story of Dahl's I've read before. UGH but not for him, just the subject matter. One family's blessing is another's horror story. You'll recognize the plot instantly from:

No child was more welcome than Adolf was to Klara.

Edward the Conqueror I hate cats but I think this story's gawdawful, egregiously cruel, without any shred of the author's "waggishness" as it was intended to exemplify. I hope Louisa gets a swift, condign revenge on the jackanapes. Animal cruelty, even to an animal I do not like, is not funny or clever or remotely acceptable.

This is another refined-marital-cruelty story. I think Dahl's taste for these is telling.

Pig is the rather prosaic title of a cautionary tale meant to scare parents into allowing their progeny to live in the world instead of apart from it. What would Dahl say of today's youth? Nothing kind or supportive! Lexington's fate is the one that I strongly suspect he would wish on our technoworld's abundant crop of Candidely naïfs: Slaughtered for their meat & fat.

Champion of the World does the same as did "Pig" only this time with animals being poached instead of kids being coddled. Trying to cheat the system without understanding *why* is a damn fool's game; doing it for a scumbag too lazy or scared to do it himself? "You're a special kind of stupid, aren't you?" says the meme. 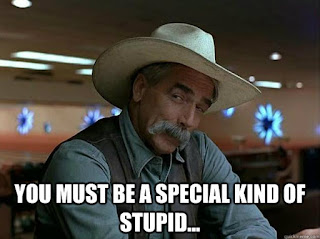 ***
And with this mordant but unamusing tale, Dahl leaves my readerly ken for. fucking. ever. No more. No! I refuse. I liked three of the eleven stories enough to be glad that I'd read them, and recognized one story from my long-ago high-school read of it in an anthology I had to buy for school, but that's just not enough for me to want to know more about what went on in Roald Dahl's head.
Posted by Richard at 6:30 AM