LOT: Stories might as well be in post-apocalyptic Houston, but you NEED to visit now 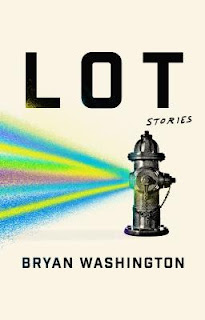 The Publisher Says: Stories of a young man finding his place among family and community in Houston, from a powerful, emerging American voice.

In the city of Houston - a sprawling, diverse microcosm of America - the son of a black mother and a Latino father is coming of age. He's working at his family's restaurant, weathering his brother's blows, resenting his older sister's absence. And discovering he likes boys.

This boy and his family experience the tumult of living in the margins, the heartbreak of ghosts, and the braveries of the human heart. The stories of others living and thriving and dying across Houston's myriad neighborhoods are woven throughout to reveal a young woman's affair detonating across an apartment complex, a rag-tag baseball team, a group of young hustlers, the aftermath of Hurricane Harvey, a local drug dealer who takes a Guatemalan teen under his wing, and a reluctant chupacabra.

Bryan Washington's brilliant, viscerally drawn world leaps off the page with energy, wit, and the infinite longing of people searching for home. With soulful insight into what makes a community, a family, and a life, Lot is about love in all its unsparing and unsteady forms.

My Review: This is not, appearances to the contratry, autobiographical. It's art, inspired by lived life, and Author Washington isn't its only model. He knew the models better than privileged and pampered Reader Person can. But there's a smoothness and facility that's the hallmark of the born writer, the one who wouldn't fit in no matter what or where or how they grew up. He didn't live in Alief, or maybe he did exist in that space but he was always apart and different and queer...but mostly he was born to be a writer. As always, I will employ the Bryce Method and go story by story with my visceral impressions only lightly toned down and/or tarted up.

Lockwood is a quick hit of what it means to be down and out, illegal, and queer. Also black and queer.


Once, I asked Roberto if he liked it in Texas. He looked at me forever. Called it another place with a name.
Could be worse, I said. You could be back home.
Home's wherever you are at the time, said Roberto.
You're just talking. That doesn't even mean anything.
It would, he said, if you knew you didn't have one.

I live in the same world as these boys and might as well be Arcturian. Yep. This one's a winner. Anything that can tell you that you don't know one single goddamned thing about the city, the state, the country that spawned you? That's a voice you need to listen to.

Alief gives the ragged and rowdy account of the end of several lives, two cheating bastards and a fool of a husband, with the full force and majesty of the Neighborhood behind it. Mistakes, obliviousness, the eternal unchanging voraciousness for Story that makes gossip so damned toxic yet irresistible, addictive. Like...well...reading, if we're all honest, dipping into the universes we weren't invited to inhabit. In this universe we're visiting, the Greek chorus of the folks living there is used to best effect as it dissects not predicts. A good choice, Author Washington.

610 North, 610 West locates us in Houston's geometry, using it as a quick way to orient us to the emotional poles of little man narrator's life. Ma isn't what Pa wants; he finds something he does want; life goes on, the myriad casualties spread in Houston's circular blast radius. Javi the vicious brother starts out ans stays shitty, abusive, homophobic; Jan the eldest sister vanishes, as so many without moorings but with ambitions do. Who's left? The gay little brother! Shocking! he murmured, clutching his pearls. Ma and her queer son. How did that ever happen.

Shepherd follows one young half-Jamaican to his summer of love, his Jamaican whore-cousin (the soursop woman!)'s summer of rest and recovery from multiple tragedies, his sister's sexed-up summer of post-college freshman-year freedom; lots of firsts, not a lot of happiness. Unlike the lower-class family's stories, the parents are window dressing. The boy doesn't become a man, but he knows he's going to and it isn't a comfortable thought. His cruelty to a kind woman is a harbinger of bad things to come, I fear.

Wayside a whole eight pages of horror. "Rick was...the most light-skinned out of all of us, and he carried himself like all of kindness in a bottle." We get down to the double horror of: Spoiler Alert!
...
...
...
When we made it to the body, my brother snatched my hand. He made me touch Rick's face. He told me this was what happened to fags.
...
...
...
And that, mijos, is the worst and nastiest thing ever felt, thought, said. Our little man narrator doesn't report this with a flinch, just a numb and vacant, deadened, dead-end voice.

Bayou brings us the chupacabra, myth made flesh, that can't or won't save two of life's losers. Boys with names like TeDarus and Mixcoatl don't even inherit the meek's mite of World. They call out for attention, demand to be seen, heard, but when they get it they don't know what to do with it. Mix, poor thing, is gay in a world that needs someone to hate for being Other so he's it. TeDarus is a space-taker. Nothing can save them from oblivion. Nothing is going to change or get better. Like the chupacabra they found, they slip away and there's no proof they were ever here.

Lot is the heart of the book, the heart of the family. Everything comes to a head, breaks, spills its rage-pus down the sides of the boil that these wretched people fester inside. Javi the hater, Jan the jilter, father, mother...all just don't want to see any of the cesspit's contents they're grinding the youngest's face into. RUN I want to scream, take money for the sex, escape however you can! And I know I'm shoutin' down the well. He's not even going to inherit the cesspit.

South Congress has poor Guatemalan illegal Raúl hooked into small-time street-drug sellin' Avery; it's a sad if common tale of someone who was never going to do more than just get by getting by in a place that hates him for being, won't forgive him for existing. Then how that, finally, in the end, blows into smithereens is a shock because I wasn't expecting Author Washington to leave Raúl with an opportunity that he's smart enough to seize but dreads succumbing to. Pungent and packed.

Navigation is such a freakin' hopeless mess of a life story getting *worse* FFS as Nameless the Narrator rejects two...two!...separate chances to get his shit in order, maybe get above water by a flippin' nostril, but NOOOOOO

Javi would be proud. /sarcasm

Peggy Park is like the Biblical begats in Chronicles, only this time it's baseball in the ghetto. Bored me. Hard to do with baseball stories, but yeah.

Fannin is the last will and testament of Jan, the jilting sister, who saw her father in a bad way one last time but did nothing. I didn't like her before, now I really despise her. The world she's made is built on, not a lie exactly, a hollow place...an excavation of the root-ball her life sprang from. People like that? I don't envy them one single possession.

Waugh teaches us the lesson that Love's got shit to do with reality but will fuck you up worse than anything else. Poke loves Rod but betrays him by leaving him at Rod's lowest point; all to be with Emil the middle-aged refugee from a place that no longer exists (I'm guessing Lebanon based on his age and backstory). He loves Poke, but can't ever figure in to his picture Poke's love of his calling, the streets. Rod? No one sees it, no one says "oh yeah, that guy" and no one, when he goes looking, can tell Poke anything.

There's no closure to be had on betrayal.

Elgin is the beauty of failure, the glory of losing, the passionate need to fuck up again. Nicolás. The name that means People's Victory. He alone of all his people...Javi, dead in the ground; Mam booked out to Louisiana; Pa? *shrug*; Jan the arriviste, dreams drowned by Harvey...stayed in his place, stayed long after he lost the will to make a life; he won the loser's lottery by existing, just that, as his life spun out of reach. Sex with one-nighters does nothing to fill you up no matter how big a dick he has. Then what? Go to the sea, sit in the water, leave a sad and lonely and worthy man in your bed and....

What's left is existing before exiting. All there is.

Those two-tenths of a point off perfect are for the tedium of Peggy Park and the last-minute narrator naming. Best left, or used throughout, as this feels contrived to me.
Posted by Richard at 6:30 AM