MAGGIE BROWN & OTHERS: Stories from the height-of-his-powers observer of Jewishness, Peter Orner 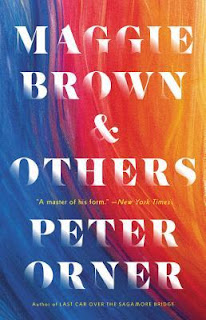 The Publisher Says: In this powerful and virtuosic collection of interlocking stories, a National Book Critics Circle Award finalist takes the form to new heights.

In his orchestral and moving new book, Peter Orner, a writer who "doesn't simply bring his characters to life, he gives them souls" (New York Times Book Review), chronicles people whose lives are at inflection points. In forty-four compressed gems, he grips us with a series of defining moments. Whether it's a first date that turns into a late-night road trip to a séance in an abandoned airplane hangar, or a family's memories of the painful mystery surrounding a forgotten uncle's demise, Orner reveals how our fleeting decisions between kindness and abandonment chase us across time. These stories are anchored by a poignant novella that delivers not only the joys and travails of a forty-year marriage, but an entire era in small-town New England. Bristling with the crackling energy of life itself, Maggie Brown & Others marks the most sustained achievement to date for "a master of his form" (New York Times).

My Review: This collection of short takes on life is by the brother of gay comic artist/storyteller Eric Orner (The Mostly Unfabulous Social Life of Ethan Green and its 2006 movie), with whom he collaborated on Love and Shame and Love (2011). He's received Lannan and Guggenheim Fellowships; he's received the Rome Prize; both his résumé and his family tree glitter. Then it is no surprise that this mid-career offering shines...no, better to say gleams...with the soft, sterling glow of authentically and beautifully told fiction.

All the shining stars, all the bright stripes, all the band fanfares for Walt Kaplan is Broke: A Novella! It's a beautiful and precise tale of Jewishness on the unexpected margins of US urban blight. It is all of Walt's marriage, a union quite perfect; it is complete and entire and I wouldn't change a single word. The Chicago stuff, Lighted Windows, not so much; the thematic unity there was love, looking for love, running into it without meaning to, and that's pretty much why short stories get a bad rap from most folks because, in the end, who friggin' cares. Nothing stands out, no adultery is that interesting and no first love is at all interesting.

Renters: A Sequence was affecting as a group of minor stories, cohesive in their central theme of exploring the disaster and misery of a marriage foundering under the skyscraper-tall waves of mental illness; the issue for me, the reason it wasn't as rock-me-back beautiful as Walt Kaplan was, was that the characters were sketched in thin, spidery lines instead of bold, dark strokes.

The Cali stuff, Come Back to California, was okay, I guess; deft enough and well-observed but not excellent the way the Fall River, Mass, Jews in Castaways were. Startlingly rich and layered characterizations in quite compact stories, so compact as to be fleeting in some cases. The best single story in the book, and unsurprisingly it's a longer one, is in this section: "Bernard: A Character Study" was a peak read for me, a simple and direct evocation of a simple and direct person's time on this Earth.

The micro-ness of the fictions, however, works best in the Walt Kaplan novella. The tesserae forming its mosaic make a picture of perfect tapas, served to present a dozen views of the drosh; they each have a flavor impact outsized to their physical page presence, but contribute their unique qualities to a whole and satisfying conclusion to one's story hunger:


And think of the '60s, when the whole country got a little wilder and we joined in and did it twice a night? You remember, Sar? Now twice a night would be like rising from the dead, but history is history, and if not set down on paper it should at least be ruminated upon. Sarah and Walt Kaplan, one night, more than once, two entirely separate fornications.

Now, for a philosophical as well as a practical question: Why didn't we just push the beds together and leave them there? Ah, because that would be a lie, no? The nature of the reaching, the nature of the whispered entreaties, a thousand variations on the same invitation, is that both reaching of the hands and the question in question invariably lead to moments of complete incompleteness. Because the upshot of coupling is uncoupling. The essence of association is disassociation. Because you can fuck till you're blue, but at a certain point the inevitable nightly drawing apart happens for good, am I right or am I right? Spell it out again: the retreat once again to separate beds attains a cementation that precludes any further you wannas. After a certain point you wanna? is no longer an invitation for rumpus; it's a cry from oblivion.