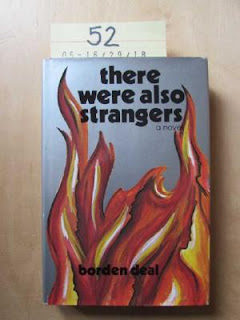 THERE WERE ALSO STRANGERS
BORDEN DEAL
Maybe you'll get lucky, who knows
Out of print, so there's no way of tellin'

The Publisher Says: Strangers move into the dark, old house on the face of the mountain. In one sun-stained summer, they cast a mysterious aura that shrouds young Borden, stabbing his heart and mind in a Jungian psychodrama that pierces his darkest fears and our deepest emotions.

The old house seems the scene of sedate, proper living, but from it radiates a scintillating sense of good and evil. Within, an enticing but enigmatic temptress ignites the young man's rites of passage through the kaleidoscopic aspects of his own sexual/emotional nature and that of the world surrounding him—a world of pulsing realities and eerie glimmerings of the supernatural and unknown. What happens as he is pulled by powerful, opposing desires is a passionate, haunting tale that has the fiery beauty of truth. It is told by internationally acclaimed author Borden Deal, a novelist of rare power and distinction.

THIS BOOK CAME VIA MY LOCAL LIBRARY'S I.L.L. PROGRAM. THANK YOU!

My Review:Not quite a half-star above three...a bit on the mannered side for my taste.

Borden Deal was one of those "famous if you know who they are" figures that literature specializes in producing (eg, tragic suicide David Foster Wallace, career suicide JT LeRoy, a lady whose 1990s hoax of being a gay teen prostitute inspired a biopic, of all things). He was a humidly Southern kind of storyteller, making a lot of psychosexual hay while the sun of Public Disapproval still shone; his career was a lot slower, and a lot heavier on "erotica," after the Swingin' Sixties got started.

This is his last novel before hard drinkin' and smokin' killed him at 62, in 1985. It's probably good that he died before he heard what folks were saying (see 1985 review below). Teeny-weeny (and now defunct) New Horizon Press of Far Hills, New Jersey, brought it out...that should say something to you, since the 1950s and 1960s saw his books under Holt, Rinehart & Winston (The Tobacco Men, 1965) and Scribner's (Walk Through the Valley, 1956) colophons. His moment had passed; the Broadway play based on his novel The Insolent Breed and the film based on Dunbar's Cove were decades past by then. There was no way this little Gothic novel about narrator-Borden, poor sharecropper's son, coming of bisexual age in the Great Depression, would've made the grade at Doubleday!

It's not a bad book. It's got the kind of heightened language that was out of fashion in the 1980s, putting Deep Thoughts in Countrified expressions in the mouth of a 13-year-old. Much about the story would've made it a bestseller in 1965, what with narrator-Borden developing a serious crush on Charles, while all-but ignoring Frances the living breathing girl on his doorstep. The faux-country "ain't"s and so on would've gone down a treat then, as well. But in 1985 that was not the first stare of regionalism and, mid-AIDS crisis, narrator-Borden's nascent bisexuality wasn't enough to épater les bourgeois anymore. The Publishers Weekly review from 1985 is, I think, as fair an assessment of the work as any I can dream up:


Fantasists had better have a light, sure touch, an element lacking in this hard-to-credit journey back to a time when the 13-year-old narrator, Borden, was beginning to question the shibboleths that governed his life. Confronted one day while hoeing cotton by Charles, similar to himself in age and size but a world apart in sophistication, Borden abandons his work and follows where this strange boy leads. They meet thereafter at night, so that Charles can show Borden how steamy life really is (sexual orgies, marital hatred, madness) in this Southern, God-worshipping village. Eventually he is lured to the house of Charles's grandmother, who will complete Borden's awakening to his own sensibilities and to greater understanding of the world. Charles is clearly an alter ego, a personal demon, whom Borden must exorcise now that he has developed inner knowledge. In the book's most gripping scene, he rids himself of his guide and tormenter and returns cleansed to the cloyingly sweet little girl who is already acting like a wife of 20 years. In spite of its canned corn-pone language and undeveloped characters, this clearly autobiographical work will be of interest to Deal's admirers.
Copyright 1985 Reed Business Information, Inc.

The Gothic image of the house turned inwards, the dark and spooky doings inside, the mighty-are-fallen family that Charles comes from...standard. Michael McDowell does it better in his atmospheric horror novels of roughly the same vintage (eg, The Flood, Cold Moon Over Babylon). The ending, which I will not spoil, involves a purification rite that's not in the least bit overused. /irony

The novel's short and the read's quick. My county's library system lost its only copy of this marvy, but entirely on their own recognizance sourced a copy for me to read via ILL from Mississippi! Of course, I imagine a native son's books are thick on the ground there, so it's not like it was a hardship for the lenders, but still...!! I'm always amazed and delighted when people go out of their way to fulfill patrons' idle whims in reading material as part of the service, unheralded, unasked, and I'm sure largely unnoticed and unappreciated.

I noticed. I'm most appreciative. I wish the read had been more exciting.
Posted by Richard at 6:30 AM

Email ThisBlogThis!Share to TwitterShare to FacebookShare to Pinterest
Labels: #LibrariesAreAwesome, #ReadingIsResistance, 3-plus star review, Borden Deal, out of print