NIGHT BOAT TO TANGIER, apples never fall far from trees now do they? Longlisted for the 2019 Booker Prize 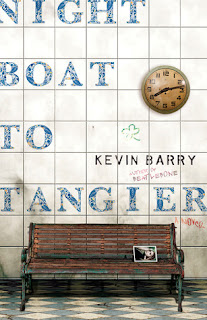 The Publisher Says: In the dark waiting room of the ferry terminal in the sketchy Spanish port of Algeciras, two aging Irishmen — Maurice Hearne and Charlie Redmond, longtime partners in the lucrative and dangerous enterprise of smuggling drugs — sit at night, none too patiently. It is October 23, 2018, and they are expecting Maurice’s estranged daughter (or is she?), Dilly, to either arrive on a boat coming from Tangier or depart on one heading there. This nocturnal vigil will initiate an extraordinary journey back in time to excavate their shared history of violence, romance, mutual betrayals and serial exiles, rendered with the dark humor and the hardboiled Hibernian lyricism that have made Kevin Barry one of the most striking and admired fiction writers at work today.

THIS CAME TO ME VIA MY LIBRARY'S I.L.L. PROGRAM. THANKS Y'ALL!

My Review: Sunsets are biblical, nighttime flowers are dull amethysts, quiet rubies...a tiny, sultana-faced man in lilac slacks and a blazer beneath a pompadour appears, to no story affect...London's bones limned against weak and apologetic light...this is a beautiful read.

The story is horrible, two men...Maurice and Charlie...whose love of their loucheness and their criminality and their addictions, their love for each other that excludes all the women they adore so helplessly and whose lives they casually, violently ruin, seek their daughter.

No. They aren't gay. The woman they both adored for a time had a baby and, well, who knows whose she really is.

Their awfulness is, in their fiftysomething selves, incredible and unforgivable. Their time in the Bughouse... smoky-grey brick Victoriana carrying the misery of three centuries...detoxing from heroin addiction is not enough to make the difference in their shared past. Their shared room, twin beds, no hint of physical intimacy they're Irish fagawdsake. No one in this book touches except for fucking or killing. People die, have died rather; these men haven't but they know they will. Soonish.

But they are themselves to the end. Does one wonder that Dilly, the desperately sought daughter, left and doesn't wish to be found? One does not. But neither does one feel their hunger to see her again, their desperate desire to connect to Life, is out of character. The way they seek to accomplish that connection is both toxic and perfect. They only know each other in this world. They came to do this desperate thing together. They'll leave together, they'll make whatever there is to be made of breathing after life is over.

I will be a bit let down if this book does not win the 2019 Booker in twelve days. No, strike that, I'll be jawdroppingly stunned and not a little pissed off. Beautiful, poetic, smooth phrases telling hideous, deforming agonies in stertorously breathed oxygen-poor oceans of wreckage aren't common and neither should they be. A diet of these stories would put me in the Bughouse to breathe the smoky-grey brickdust of bygone agonies.

But when they appear these highly luminescent scimitars, curved to the reader's psychic throat, should get the fearful praise and nervous acknowledgment that Charlie and Maurice have always commanded.
Posted by Richard at 6:30 AM