YOUNG MAN FROM THE PROVINCES, gay life as a sex toy in the pre-Stonewall world 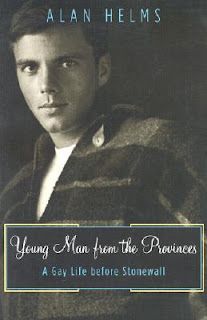 The Publisher Says: Young, intelligent, and handsome, Alan Helms left a brutal midwestern childhood for New York City in 1955. Denied a Rhodes scholarship because of his sexual orientation, he soon became an object of desire in a gay underground scene frequented by, among many others, Noel Coward, Leonard Bernstein, and Marlene Dietrich. In this unusually vivid and sensitive account, Helms describes the business of being a sex object and its psychological and physical toll.
"Riveting."- New York Times Book Review

"Extraordinary and elegantly written. A record of a gay world that has virtually disappeared over the past twenty-five years of liberation and fifteen years of AIDS." -Boston Globe

"A beautifully written memoir. Helms sped through the celebrity-packed fast lanes, but he has learned how to stand back and get some perspective." -Los Angeles Times

"Sublimely funny, engaging, pathetic, highly literary, and painful to read. Helms seems like a gay Everyman whose quest for self-knowledge, respect, and contentment in this contemptuous world mirrors that of many other marginalized people." -Bloomsbury Review

Alan Helms is professor of literature at the University of Massachusetts, Boston.

I RECEIVED A REVIEW COPY OF THE BOOK FROM THE PUBLISHER. THANK YOU.

My Review: Beloved Boston cultural institution Alan Helms had a wildly exciting past! See the film! Admire his art collection, appreciate his cultured and elegant way of speaking, his breadth of cultural knowledge, and his charming sweetness.

What does a young, abused man from flyover country do the moment he realizes he's queer? RUN! Get to New York City as soon as possible. He got to Columbia University in 1955, leaving behind a life in Indianapolis, Indiana, that could charitably be described as "uncongenial." A father who thought his son was a bitter disappointment...how many of us queer boys can relate to that...a mother whose situation wasn't a lot better than his, a younger brother whose close brush with death was the single moment in his childhood when peace reigned. None of this is a recipe for a healthy adulthood...and add in the author's understandable, if off-putting, self-absorbtion and you get a difficult-to-empathize-with narrator.

But he was So. Beautiful. Look at that face on the cover! Hoo-ee!

And the awfulness of that...wow...to be so pretty and so readily available and so snobby, who can claim to be surprised that he wasn't a pleasant person? His sexual awakening came at the price of being raped. His family life prepared him for a life of abuse. He dived into it in the glamorous world of closeted gay life pre-Stonewall. Pretty sexually available intelligent boys found innumerable lovers, and the author wasn't about to say no. (I totally relate to this and would've done precisely the same in his shoes. Damn the bad luck of not being pretty!) So a decade and a half passed in what I imagine was a golden haze...this book's largest part. It's a bit less charming to me than it might be to a younger reader. I look at the wreckage he glosses over and think, "there's the real story."

Yes, sleeping with famous Hollywood stars and titled Eurotrash is all very well. But the people you stood up, the ones whose parties weren't quite glam enough that you said you'd attend, and so on and so forth? How did you sleep, look in the mirror, launch yourself at the next big fish in your hifalutin' pond without thinking about them?

The Fall took place when he was thirtyish, and some semblance of human feeling broke the ice he'd cultivated to keep his agony at bay and under the surface of a freezing cold lake he called his heart. Escape to Boston and the tender mercies of a shrink who began the process of waking the author up from his frozen state. Then it happened: His body aged. He wasn't the hot young muffin anymore; he wasn't even visible to the hot young muffins. That had to be a bad, bad day.

Now, let me not try to hide my glee here. This event has occurred in my life, too. I can not imagine how much worse it was for a formerly gorgeous creature, feted and celebrated and wined and dined, to be cut off from that gushing geyser of distractions. Luckily for his sanity, Helms had a brain and a deep love for the life of the mind that he'd never left behind or neglected. While learning what he'd never known, that feelings are best felt in the moment and not in retrospect, I'm sure he left yet more carnage in his wake. But the fact that no one ever killed him means that he learned enough to at least fake his way through professional, if not personal, relationships. So hope still shines for him to pull his head out of his ass and recognize that, in his swan-paddle through youth, he got into some ugly emotional habits that would be wise for him to shed before he's patted in the face with a shovel and 120 cubic feet of dirt dropped on him.

I guess it shows that I don't like the man too much. Yes, part of it is envy: I would've LOVED to live among those glittering parties and glamorous people, and I'm jealous that he won nature's looks lottery. But more of it is the sense that grew and grew as I read his (ampersand-laden) memoir that he wasn't sharing his journey with me.

He was bragging that it happened.

I suppose I would too, and that is a disappointing self-revelation that elicits deep sadness in my shallows. Read the book, o ye queer boys over 50 to relive a lovely, dead time when we were few but fabulous; QUILTBAG youth, especially young and pretty ones, definitely think about your history; y'all straight folks, mm, on balance I'd say not unless your Gay BFF approves it for your personal tastes.
Posted by Richard at 6:30 AM