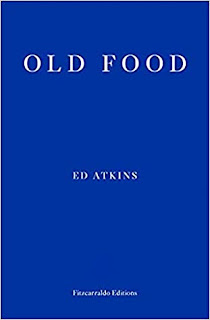 The Publisher Says: From one of the most lauded artists of his generation comes a purging soliloquy: a profound nowt delivered in some spent afterwards. Scorched by senility and nostalgia, and wracked by all kinds of hunger, Ed Atkins’ Old Food lurches from allegory to listicle, from lyric to menu, fetching up a plummeting, idiomatic and crabbed tableau from the cannibalised remains of each form in turn. Written in conjunction with Atkins’ exhibition of the same name, Old Food is a hard Brexit, wadded with historicity, melancholy and a bravura kind of stupidity.

Ed Atkins is an artist who makes all kinds of convolutions of self-portraiture. He writes uncomfortably intimate, debunked prophesies; paints travesties; and makes realistic computer generated videos that often feature figures that resemble the artist in the throes of unaccountable psychical crises. Atkins’ artificial realism, whether written or animated, pastiches romanticism to get rendered down to a sentimental blubber – all the better to model those bleak feelings often so inexpressible in real life.

I RECEIVED A DRC FROM THE PUBLISHER VIA EDELWEISS. THANK YOU.

My Review: Listen, from *ME*, three and a half stars for poetry is a goddam rave review. I really, really dislike being condescended to; poets are, of necessity, self-referential and therefore can't avoid a certain amount of "what do you mean, what do I mean by that?" It's irritating as all get-out to me. I feel about it the way I suspect not-very-bright people feel about being forced to read The Classics. THEN there's the unrelenting Englishness of the poem! I mean, don't read a tree book of this, my fellow Murrikinz, you gonna NEED that Wikipedia/dictionary function A LOT.


Red spider mites paused
there, druft
down through the gone
skylight
with other and more real
bits of the
summer, seasoning a
generous spread
of pokey galantines, upset
duck and
I think quail. Charged with
waves of
mortadella, fagged little
Portuguese
chicken livers, garlic
mosaics. ...

Not so much, then, on the pleasure reading scale. "Druft" and "galantines" and so on and so forth, well, yes it's titled "Old Food" but good lord! Brand-name junk foods, exotic-to-Colonials preparations of things we don't eat that much of, and just flat gross mental pictures you can't unsee:


Oodles of
dropsical maggots and lice.
The
maggots moving fast like
junior
sea penises. They got all up
in her
mouth and in her ears so
that for the
longest time she could only
declaim
in Martian, hear distant
wars and/
or futures. Wiping tough
tits, is
what.
–and–
Thank you for just opening
your legs
the goose wishbone and the
gavage to
engorge to torture. On
thick, doorstop
toast with mustard seeds
and sweated
green onions, served with a
squat
glass of a cool, pale
Sauternes and
with Hannah.

But sticking with it, keeping the pace of reading, pays off in a very strange way for the uncultured oafs like me: Bend your brain a little. Crank the handle again, spread the jalousie just a fraction more than before, and the weird, unlyrical pleasure of the writing will catch you.

And did anyone who's read a significant portion of my over seven hundred forty blogged reviews, over eighteen hundred total reviews, ever expect to hear me say that?
Posted by Richard at 6:30 AM