LET'S GET BACK TO THE PARTY, Zak Salih's debut novel 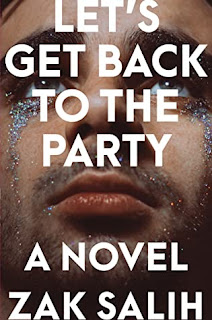 LET'S GET BACK TO THE PARTY
ZAK SALIH
Algonquin Books
$25.95 hardcover, available now

The Publisher Says: What Does It Mean to Be a Gay Man Today?

It’s just weeks after the historic Supreme Court marriage equality ruling, and all Sebastian Mote wants is to settle down. A high school art history teacher, newly single and desperately lonely, he envies his queer students their freedom to live openly the youth he lost to fear and shame.

So when he runs into his childhood friend Oscar Burnham at a wedding in Washington, D.C., he can’t help but see it as a second chance. Now thirty-five, the men haven’t seen each other in a decade. But Oscar has no interest in their shared history. Instead, he’s outraged by what he sees as the death of gay culture: bars overrun with bachelorette parties; friends getting married, having babies.

While Oscar and Sebastian struggle to find their place in a rapidly changing world, each is drawn into a cross-generational friendship that treads the line between envy and obsession: Sebastian with one of his students and Oscar with an older icon of the AIDS era. And as they collide again and again, both men must come reckon not just with one another, but with themselves.

Rich with sharply drawn characters and contemporary detail, provocative, and emotionally profound, Let’s Get Back to the Party is sure to appeal to readers of Garth Greenwell, Alan Hollinghurst, Claire Messud, and Rebecca Makkai.

I RECEIVED A DRC FROM THE PUBLISHER VIA NETGALLEY. THANK YOU!

My Review: There are a lot of things to celebrate among queer Americans at the moment. Progress has been made that, when I was a babyqueer, was inconceivable. (And yes, I do know what that word means.) Legal marriage? Common surrogate fatherhood?! Even, in some places, adoption?!? All this presupposes joint mortgages, life insurance left to one's partner, joint bank accounts, Social Security survivor benefits...holy carp, the GOP tomb-raiders who oppose even straight people getting back the money they put into the system must be plotzing. Believe you me, under-40s, not one bit of this was probable in a world with Don't-Ask Don't-Tell witchhunts in all branches of the military and the ever so inaptly named Defense of Marriage Act specifically, and unConstitutionally, forbidding same-sex couples from receiving the 1,049 (by some counts) benefits available to heterosexuals simply by speaking a few words to a County Clerk. (If you're wondering, the religious idiots do not have any thing at all to say about marriage. They can refuse to perform a marriage ceremony for anyone they choose, for any reason they choose; but the State is the only entity that can declare you married, and this has always been so in the United States.)

But what laws give, they can take away; and these rights which are justly ours as much as theirs can, with the wrong (aka right-wing) party at the helm of government, be taken away again by legal chicanery. And Oscar Burnham is bitterly aware of this. Beyond the fact that the extension of legal access to protection for couples strikes at one of the defining qualities of gay-manhood, unbridled and unfettered and unceremonious couple/uncouple relationships where everyone is Mr. Right Now, he's grouchy and squicked out about how the gays are becoming hipsters instead of threatening outsiders to be envied and feared. When he meets Sean, the elderqueer, the survivor of the AIDS years (aka "my direct contemporary") they bond over the Sad State of Things. Sean remembers what it was to be Other with a capital Q when one came out or was outed. Oscar, bless him, tries his damnedest to be there in Sean's head, attaches himself to the older man, becomes his happy shadow.

Sebastian Mote teaches for a living. Sebastian, after re-encountering youthful friend Oscar at a wedding, begins to think...well...sense...maybe perceive will do...that the unfinished business he brings to the table where Oscar's sitting should get more attention from them both. A dance begins, one that ended a decade before; one that wasn't ever resolved, though, so the emotional bonds are still firmly seated. Sebastian's so involved with his students, in the not-squicky way, that he doesn't quite see how Arthur is becoming an obsession...doesn't quite want to let go of his access to the youth's open, happy life awaiting him with boyfriend Raymond.

There is so much about what happens that you'll hate having spoiled. I need you to know, though, one big facet of this story is tragic and painful and life- and generation-defining. It will leave or open wounds for its ferocity and its outrageous reminder that Hate trumps all values thrown in its way because humans love the raw, red, bloody gobbets of The Other's flesh. I don't like that it's true, but nothing in my over-sixty years on Earth has ever come close to persuading me that it isn't.

I am, in a lot of ways, like Oscar: Grumpy, disillusioned by mainstreaming, in a strange, intergenerational love relationship that doesn't look like one anyone outside it understands. (I hope like hell that Rob doesn't feel conflicted about the same things Oscar does!) For that reason, I found this read very much an involving one. The relationship Oscar has with his parents, the emotional ties that bind but are ever looser he feels with Sebastian...all very much like my own life.

What in the end worked best for me about this read was my sense of its reality, its groundedness, and thus it earned my trust. I was always glad to read more and I returned to the read without hesitation. I'm so pleased that the publisher decided to offer me the book to review, and I'm just as pleased that the author wrote such a deeply personal story. The one thing you shouldn't expect is detailed sex scenes, à la Garth Greenwell mentioned in the blurb. It's just not needed to tell this tale the best way it could be told, so Author Salih doesn't do it for the sake of doing it. A big point in his favor.

Then there's the Tragedy I alluded to above, while handled sensitively, isn't so delightful; I wasn't all the way convinced that the event's aftermath was, in fact, not given short shrift. It felt to me as though it was no longer useful in the plot so let's just go now, k? And they did. It wasn't what I felt was enough given the scope of it.

While it did reinforce the solipsism of these men's on-again, off-again intimacy, it felt off, almost reductive, as it's presented in the book. That's a matter of opinion, I know, so take it as such and decide for yourself what you think of the ending.

Now we all have to sit and twiddle our thumbs until Author Salih brings us his next idea. I'm looking forward, and expect you will be too.