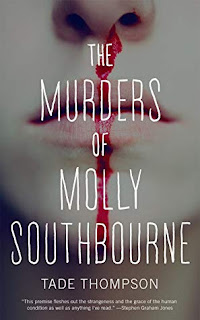 The Publisher Says: Every time she bleeds a murderer is born. Experience the horror of Tade Thompson's The Murders of Molly Southbourne.

The rule is simple: don't bleed.

For as long as Molly Southbourne can remember, she's been watching herself die. Whenever she bleeds, another molly is born, identical to her in every way and intent on her destruction.

Molly knows every way to kill herself, but she also knows that as long as she survives she'll be hunted. No matter how well she follows the rules, eventually the mollys will find her. Can Molly find a way to stop the tide of blood, or will she meet her end at the hand of a girl who looks just like her?

My Review: A near-enough future novella that blends the horror inherent in a mutating, collapsing Earth and the human response to it with the species-level will to live no matter what.

I was utterly sucked into the narrative early on:


An example has aspects of a thing, but is that the thing itself? The mollys have aspects of Molly, but that doesn't make them Molly, does it?

I'm not going to tell you what Molly's relationship with the mollys is because this is a very difficult concept to get across. I want the whole reading experience to be as full and rich for you as it was for me. And I want to encourage you to spend $3.99 on a novella of surpassing strangeness, violence, and transcendent oddness.

What isn't odd, though sometimes is transcendent, is Author Tade's writing. He finds angles and corners where others don't look, or if they look don't see.


Her shoes wait in formation for her feet to quicken them.
***
Alarms are going off like the mating calls of robotic insects.
***
As she cuts the cadavers on the slabs, she realizes there is no sense to be made out of life.

With the exception of one, and only one, hideous and disfiguring instance of the w-bomb, the text is chillingly, even eerily, smooth and flawless. It resembles in its affect the narrative monologues of Rod Serling. You know the point is there, you can see it rising like the number Pi is said to do over all knowledge, glimpses above foggy lowlands of text, but it shifts as your gaze has to slip away from it for you to negotiate the steps of the ziggurat.


Climb, I urge you; the view is fine and the journey's toll is just the beginning of a quest.
Posted by Richard at 5:00 PM No comments: