A conversation on reviewing 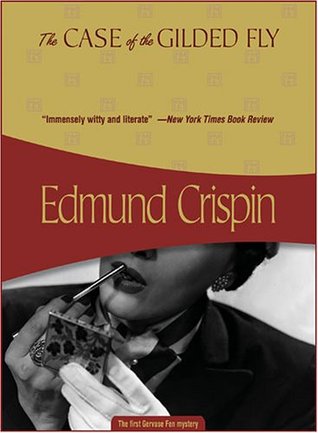 One of the 800-plus reviews I have left on Goodreads drew an interesting conversation about the process of reviewing books. I rated the first Gervase Fen mystery as a 2.5* read, reviewing it with this (full review reproduced here):

My Review: Tedious, fusty, and supercilious.

Well, that about sums that up.

Then along comes someone with a made-up Goodreads username:

PERSON: I agree {with your review of this book}, mostly. Why rate "ok" if not? I'm debating between 1* or 2* myself right now, so question is serious.

I've been trolled an awful lot by nastygrams from sock puppets, by people wanting to "engage in debate" (aka make me see how wrong I am to have my particular opinion), by former friends making an effort to assure me I'm the world's least worthwhile reviewer, so as often as not I ignore this kind of leading post. This time, I didn't.

ME: I rated it 2.5* because it's not a *bad* book, just tediously predictable for me. I found the style annoyingly arch, but that's a matter of taste. On my own scale, a 1* book is one that is truly just *bad* and people need to be warned away from it. I don't feel that way about this book.

That would, for most trolls, be enough to get the flames burning. So then whoever it is sent this:

PERSON: Good point put me back pondering dithering all over again.

Hmmm. So I've just posted this response, and look forward to seeing what comes next:

ME: It's all subjective, this rating dodge. It's never really easy to justify putting a judgment on a book, or a TV show, or a work of art; after all, who cares what another person thinks of them when what counts is what we ourownselves think of them?

Plenty of people, myself included, don't have unlimited time to devote to enjoying the many wonderful things there are to enjoy in this life. I use reviews by review sources I've got reason to trust to narrow down my field of operation.

I learn to trust them by comparing our opinions on things we've both reviewed. At about 70-75% similar, I learn the most from a person's opinions, by making interesting discoveries or getting my own opinions challenged by a new and intriguing perspective.

Above that, it's all about having fun reading that person's take...not too many of those. But I treasure them when I find them.

But that going back and forth, debating with yourself about what to say, what to tell people, why you think a particular thing about a book, a movie, a play, a painting...that's the part that makes writing about what others have done so satisfying and such a worthwhile exercise.

Email ThisBlogThis!Share to TwitterShare to FacebookShare to Pinterest
Labels: blog, Gervase Fen #1, reviewing, why I write

THE DEAD IN THEIR VAULTED ARCHES, Flavia de Luce comes of age in book 6! 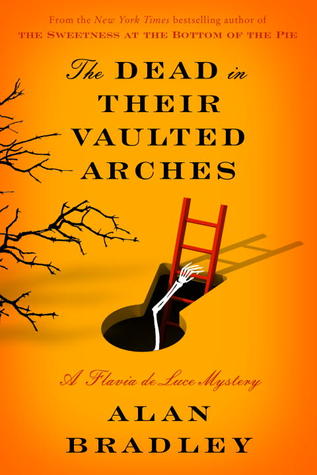 The Publisher Says: On a spring morning in 1951, eleven-year-old chemist and aspiring detective Flavia de Luce gathers with her family at the railway station, awaiting the return of her long-lost mother, Harriet. Yet upon the train's arrival in the English village of Bishop's Lacey, Flavia is approached by a tall stranger who whispers a cryptic message into her ear. Moments later, he is dead, mysteriously pushed under the train by someone in the crowd.

Who was this man, what did his words mean, and why were they intended for Flavia? Back home at Buckshaw, the de Luces' crumbling estate, Flavia puts her sleuthing skills to the test. Following a trail of clues sparked by the discovery of a reel of film stashed away in the attic, she unravels the deepest secrets of the de Luce clan, involving none other than Winston Churchill himself. Surrounded by family, friends, and a famous pathologist from the Home Office--and making spectacular use of Harriet's beloved Gypsy Moth plane, Blithe Spirit--Flavia will do anything, even take to the skies, to land a killer.

My Review: Childhood's end comes to each of us at very different times, and in very different ways, but always comes in a single moment. Nothing is ever the same again. No perception is unaltered, no thought is ever again innocent. One minute you are a child, and preoccupied with child things, and the next you are not.

It's memorable, I suspect, for all of us, no matter the event that precipitates it or the age at which it happens. In this sixth Flavia de Luce novel, she leaves childhood behind. Bradley's description of the moment, of a great wooden cog on a vast gear moving a notch, is spot-on. I can't quote it directly because it would spoiler a plot point.

Now let me address a fact of the series novel's life. Some books in a series are middle books, like middle children. They are there, but somehow not quite noticed enough or given a good space of their own to occupy. There is not a single series in which this is not, eventually, the case. Who remembers Framley Parsonage? Do you even know it's the fourth in Trollope's Chronicles of Barsetshire? When enumerating the series, I frequently have to search for this book in the Dead Letter Office of my brain. It's not as if nothing happens in the book, either. (And there's a character in this series names after a pivotal character in this book. More on that anon.) The marriages and the resultant intertwining of the fates of so many plot threads in the series make it a pivotal book. But who ever cites it as a favorite novel, or even a favorite in the series?

This is a middle book. It's not at all a bad book, just a middle book. And the fun is just beginning at the end. What the book is not is a mystery, in the puzzle-solving, here-are-the-clues sense. The mysteries Flavia is solving this time are, to put it simply and still not spoiler anything, the ones we all must resolve to discover what, now we are no longer children, we are. Flavia's extremely well-developed sense of herself, unusual in a child, is at last made part of a world that the girl must join. Herself is explained to herself, if you follow that convoluted thought process.

The world awaits. And that's a giant risk Bradley is taking: The world Flavia is joining will either cause people to put the series down for good, or will cause them to send him nastygrams for not writing faster. It is that polarizing a development.

I'm on the fence. I can see this going horribly wrong as we sink into the Swamps of Seriousness, and I can see it being amusingly fluffily unserious. But what I can't see is why this particular development surprised me so much. After all, an eleven-year-old sleuth isn't the set-up for a long-term cozy series, is it? So something had to tie the bow on the tushie of her childhood. And here it is. Heart it or hate it, the next books will not be the same kind of cotton candy, and won't be in the same world that child Flavia saw in Bishop's Lacey and Rook's End (there's a chess joke in that name which I only just got reading this book) and the Palings.

Having finished this book quite late last night, I was ruminating on its connection to Framley Parsonage and was struck by a thought: The character of Adam Sowerby, introduced earlier in the series, recurs here; and Sowerby is the name of a pivotal character in Framley Parsonage...could Bradley be creating his own corner and his own take on my dearly beloved Barsetshire? I have lamented in other threads the absence of a 21st-century Angela Thirkell, an extender of the deep and abiding Englishness of Barsetshire. Might Bradley, the Canadian, be weaving us some more tales from the rag ends of Trollope's beautiful creation?