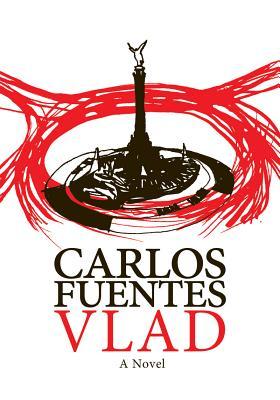 The Publisher Says: Where, Carlos Fuentes asks, is a modern-day vampire to roost? Why not Mexico City, populated by ten million blood sausages (that is, people), and a police force who won't mind a few disappearances? "Vlad" is Vlad the Impaler, of course, whose mythic cruelty was an inspiration for Bram Stoker's Dracula. In this sly sequel, Vlad really is undead: dispossessed after centuries of mayhem by Eastern European wars and rampant blood shortages. More than a postmodern riff on "the vampire craze," Vlad is also an anatomy of the Mexican bourgeoisie, as well as our culture's ways of dealing with death. For -- as in Dracula -- Vlad has need of both a lawyer and a real-estate agent in order to establish his new kingdom, and Yves Navarro and his wife Asunción fit the bill nicely. Having recently lost a son, might they not welcome the chance to see their remaining child live forever? More importantly, are the pleasures of middle-class life enough to keep one from joining the legions of the damned?

My Review: Well now. This is a later work by Mexican national treasure Fuentes, published (in serial form) in Spanish in 2004, as a book in 2010, and in English in 2012, the year of Fuentes' death. Here in abundance is the glorious, sensuous language of Fuentes' fearless imagination:


At night in our marital bed, Asunción is like the salamander of myth; cold that shall burn, burning that shall freeze; fleeting like mercury and stable as a precious pearl; devoted, mysterious, surprising, flirtatious; imagined and imaginative...No talk, all action.

This is a man discussing his wife, with whom he has made two children! Most men would barely be able to summon up that woman's hair color. Not Fuentes' husband, no indeed, he catalogs his wife's wicked sexy ways. Which, being wise to the source material of the book, lets the non-comatose reader in on the fact that all will soon fall to poo-poo in a big bad way.

Lawyer Navarro meets his senior partner's old schoolmate Count Vladimir Radu as soon as Asunción, in her role as real estate agent, delivers the required house; the scene of the meeting, a spacious and monochromatic modern villa in a fancy mountainside neighborhood, is more creepy and eerie than it would have been if Fuentes had gone the expected route and made Vlad ("all my friends call me Vlad" says the Count, in a bone-chilling moment of ersatz bonhomie) a slave to Old World notions of proper decor and architecture. Something about ancient evil in a Bauhaus-y minimalist setting, well, it made my neck hairs rise.

There sits relentlessly alive and ponderously restrained Yves Navarro (perhaps named so in honor of French writer Yves Navarre? a sensualist, like Fuentes and like Navarro, only gay), noticing the physicality of the repulsively ugly Count, taking inventory of his flaws and repulsed yet seduced by his demeanor:


His hands were eloquent. He moved them with disagreeable elegance, he closed them with sudden strength, and he didn't attempt to conceal the strange abnormality of his long glassy nails,as transparent as his windows before he'd had his house sealed.

I hesitate to use this phrase, but Count Vlad comes to life (!) in this description. It's economical and still replete with imagery that functions as subtext. Ethan Bumas, the lead translator, did good (if mixed, more on that anon) work capturing the dandyish archness of Fuentes' prose without spilling over into parody.

Yves is only at the tip of the stake, as we who have read Dracula know, he is on course to losing everything to the immortal evil Count. His beloved Asunción, she of the freezing salamanderly sexytimes, has fallen asleep after conjugal congress. Yves, in a moment that makes me want to smack him upside the head, is having straight-guy angst about whether Asunción has, errrmmm, achieved her desired completion. He frets about this for a good long while, uninterestingly enough (STRAIGHT GUYS: IF YOU HAVE TO ASK THE ANSWER IS NO, GET USED TO IT OR GET OVER IT), before slipping into a dreamlike state in which Vlad is under the marriage bed. Yves touches the glass-nailed corpse-hand as he reaches for his slippers. He is, understandably enough, flipped out; he convinces himself to go back to sleep, though. Next morning:


In my dream someone had been in my bedroom but then that someone walked out of it. From then on, the bedroom was no longer mine. It became a strange room because someone had walked out.

That...that right there, that short passage of simple sentences using simple words, that explains the heart of the horror of vampire novels. Vampires steal your life. They don't cause your death, unless you're lucky. They steal life and I do not know a more horrifying terrifying knee-knocking pants-pissing concept than that. The Weeping Angels of Doctor Who fame have the same effect on me that this retelling of vampire lore does.

So, of course, by the end of this short novella, Yves is utterly and abjectly alone, despite being granted his heart's secret desire. He is dead. His life was stolen in that awful moment above; he valiantly pretended not to notice, not to know, to deny; he fails, of course, and his failure leads him to a simple act now, in his new undeath, fraught with misery, horror, hellish cruel simulated joy:

He gets in his car.

Now why, with the positive statements I'm making about the effect of the book, did I rate it under 4 stars? Because of two things that annoy me, and one thing that I have no evidence to support but find plausible and therefore ohfagawdsake-worthy. Annoyance the oneth: Translate Spanish or don't. Mixing the two is Bad. For example, Vlad's house (which seems to be a famous one designed by architect Ricardo Legorreta, about which more anon) is first described as being in "Lomas Heights" *wince* which translates to "Hills Heights." Nuh uh. Lomas Altas is a specific house in the Lomas de Chapultepec neighborhood in Mexico City. "High Hills" or "Steep Hills" would work as a translation of that, but why bother? And later in the book, the house is described as being in Bosques de las Lomas, which name is not translated (means "Woods of the Hills"). Translate or don't! Don't shilly-shally!

Thing the twoth: Yves ponderously repeats his wife's name, his daughter's name, his employer's name, and all in 122 pages. If the book was 722 pages and chapters went by without these characters being mentioned, a little refresher wouldn't come amiss. In this space, it's an annoying rubber-headed hammer whacking my kneecap every fifth page. STOP! In the same more-is-actually-less vein, there is a longish and unnecessary recap of Vlad the Impaler's life and career. It served no purpose and is all stuff most readers likely to pick up a Fuentes book will either know or not want to fuss with. No padding needed, folks, when the story's already good.

As to the plausible-but-unproven detail, I return to that famous midcentury house, Casa Loma Alta. Fuentes was a highly cultured man, and likely knew Legorreta the architect and so would probably have known his work. The house was, I am fairly sure, owned most recently by a Chinese-born drug dealer whose 2007 arrest produced over $200MM in cash and an arsenal in some tunnels dug under the house. This set-up is ready-made for Fuentes, that inveterate myth-maker, to appropriate for his relocated vampire; and it provides that little roman à clef touch that haunted me (!) as I read the book. Drugs and drug barons stealing the lives and wealth of the bourgeois Mexicans, with neither party paying even the slightest mind to the millions of average Mexicans ground under their fancy car wheels and/or fangs. Listen, if it rang that bell in me, an American, how loudly must the whole carillon have rung for Fuentes' Mexican audience? That being said, there's the awkward sense in this book of is-it-or-isn't-it a roman à clef, never addressed and never refuted. It gave my reading a jarring neither/nor quality.

I'd still say it's worth a read, since it's short; but don't pay full price.

This work is licensed under a Creative Commons Attribution-NonCommercial-ShareAlike 3.0 Unported License.
Posted by Richard at 9:30 PM No comments:

Author Jay Lake has died after a hard fight with cancer.

Last year, I posted a series of reviews at Shelf Inflicted before Jay's self-hosted funeral, the JayWake, on 27 July. My pre-mortem read-a-thon was a way to honor the memory of the man whose work made me smile and think and sigh with pleasure so often. I made sure he knew I was doing it. He seemed to like the idea, he posted links to the reviews, and was apparently pleased to be feted by an unknown nobody blogger. What writer doesn't want to hear nice things about himself?

Safe journey home, wherever that is, Jay Lake. Thank you most kindly for all you did, for the things you never knew you did, for the worlds you made that (in a properly ordered universe, which this one clearly is not) we cloud visit in the flesh. Failing that, that you would still be able to flesh out for your fans and readers.

The City Imperishable
Trial of Flowers
Madness of Flowers

I will remember you.
Posted by Richard at 4:21 PM No comments: