Hello blog readers! I've been absent for quite a while, and I'm sure y'all have noticed how very behind I am in writing my reviews. I'd like to explain my absence and my seeming negligence. Well, real negligence, just not deliberate or malicious towards the authors and publishers I've promised reviews to.

Many of you know that I suffered a nervous collapse in 2014. For the first time in my then-55 years, the cumulative effect of childhood woes coupled with several years of psychological warfare waged against me by some people I lived with coupled with an unexpected betrayal led me to get very close to suicide.

A chance phone call from a mental health worker named Julie prevented me from going through with the plan. She talked me down off the emotional ledge. I even put away the knife I had planned to use to sever my jugular vein because she jauntily assured me it was unnecessary, help would be there soon.

I spent 4-1/2 months in the locked psych ward at Nassau University Medical Center. The psychiatrists and social workers figured out the biochemical problem underlying my extreme and disproportionate emotional response to my situation. They *could* have discharged me after 6 weeks, I was stable emotionally, but I had no place to go. The social workers finally found this assisted living facility willing to accept me despite my suicide attempt and here I am today.

Regrettably I am still physically disabled by 36 years of cumulative effects from a severe case of tophaceous gout. The pain of the ginormous deposits of uric acid and calcium crystals on my joints and along my tendons is pretty damned awful. I find sitting for any length of time excruciating. I stand up and lie down well...it's the transitions that slay me. In today's opioid-fearing climate I am undermedicated by the pain management doctor because he's afraid he'll be investigated for giving out such a large prescription. Medicare doesn't pay for cannabinoids, which would do a better job at lower doses and I can't come close to paying the $350 a month the prescriptions cost.

So sometimes the hopelessness of a chronic and incurable condition plus the deep uncertainty that faces every person on Medicare as to whether our care will continue to be funded plus the absurdly deep cuts in Medicaid that pay for the facility I live in...well...in April I cratered. I couldn't read, let alone write reviews. I am still wobbly in the following-complex-arguments area. Getting a lot better! Adjustments to the thyroid medication made a **HUGE** difference, and upping my use of the facility's on-call psychologist has made things that much more manageable.

So to all of y'all miffed all the way up to ticked that I haven't reviewed your book(s): I most humbly apologize, and promise that I will make good on those reviews this year. I will be back on Twitter, I'm going to learn Instagram use now that I have a smartphone (thanks, Stephanie! *smooch*), and am generally announcing that #ReadingIsResistance is back up and running at 1/4 speed.

Feel free to contact me in all the ways you have if there is something you'd like to know or like for me to know. Remember that responding here on the blog requires that you be a member of the blog, an easy thing to accomplish provided you have a Google account. I hate spam so I never blast BS to my blog followers, just the posts I write.

And to the around 500 daily readers I garner from all my publicity-hounding, I love each and every one of y'all. I am so grateful that my ideas and opinions are that interesting to that many folks.
Posted by Richard at 6:32 PM No comments: 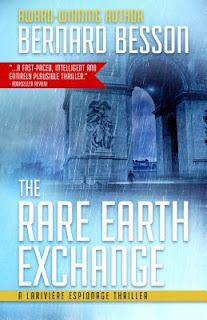 The Publisher Says: A team of freelance spies gets caught up in a web of corruption and terrorism in a struggle to control rare minerals key to today's technology. Panic strikes at the highest levels of the French government when the former president is found hanging from the rafters in his home right after a terrorist attack at the airport. Is it suicide or assassination? Freelance operative John Spencer Larivière, his karate-trained partner Victoire, and their computer-genius sidekick Luc must find out what he was hiding. Quickly, the investigation turns into a globe-spanning confrontation in a world of high-frequency trading where manipulation and corruption reign. Larivière races against the clock to find out who is pulling the strings.

THE PUBLISHER GAVE ME A DRC VIA EDELWEISS+. SO THERE.

My Review: My opinion of this French John le Carré-does-Tom Clancy-esque thriller couldn’t be more tainted with smiles and coos of delight than if Luc himself was here, spread like the glorious buffet of bisexual manliness that he is, for my personal and very intimate delectation. I enjoyed it from giddy-up to whoa.

John Spencer Larivière and his Eurasian wife, Victoire, are parents of a fine young son. Their hawt, bisexual third in this not-sexual (but Luc would, with either one) throuple is Luc Racine. So you’ve got the full picture, their three-person business is assisting French intelligence agencies with those tasks that could, if discovered, become very, very troublesome with the greater French public…say, for example, lying, stealing, running honey traps for malefactors (that would be Luc), using modern high-tech wares in unscrupulous and legally iffy ways…all of which come into play here.

The events that bring this book from zero to sixty start with a supremely momentous, heavy loss-of-life event: A plane at the gate in Orly Airport explodes. The former president of France was supposed to be on that flight, so he is clearly presumed to be the target. There was a twist, however: His seat wasn’t holding him. He is alive and well, he is on the ground at Orly, and he is shown to be deeply distressed. As one would be. Though there’s the small matter of why he wasn’t on the plane, flight 912 from Kuala Lumpur to Orly, yet why he *was* in the airport.

And we’re off! There’s a non-stop ride from pillar to post and back again…there’s a political marriage, a political scandal or five that these three uncover but don’t blab about…why they get paid…travel to Parts Exotic, and a lovely sex interlude for lucky Luc with a blond hottie whose company has done something amazing, truly exciting, and quite surprising that’s caught international sub-rosa players’ attention. These are men who play rough, and true to form, they play very, very rough.

Things end well for those in the righter, lighter shades of grey. Things end poorly for the darker shades of grey. That’s why one reads these sorts of books, to be reassured that ma’at is maintained on the macro level even when the micro looks pretty wonky. If you’re looking for water-tight plotting, not likely to find it here. The reason the president’s upset is believable enough, but what happens as a result isn’t really something I’m prepared to suspend disbelief quite enough to stamp this with the full four stars.

I’d say that the translation’s pretty seamless, it sounds like these characters would sound to me (I did read The Greenland Breach so I knew what to expect), and I think throwing in Britishisms (“full stop” instead of “period” f/ex) left me with the vaguely distanced foreign feeling. A bit like, in films, British accents are used for villains of every nationality because they sound Furrin to Murrikins.

Would I read another of these thrillers with French accents? Mais oui! As soon as I find one, I will Kindle it right up. I’d recommend them to you, adventurous reader, as well.

Posted by Richard at 6:30 AM No comments: