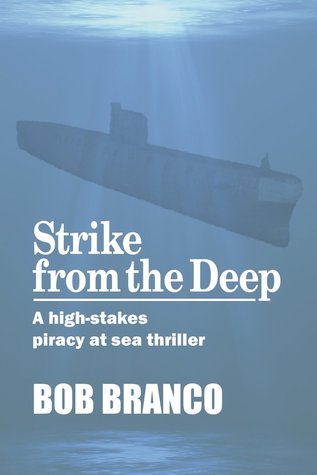 In honor of Veterans' Day, a thriller by a US Navy Veteran...4-star reviewed!

The Publisher Says: Modern-day Somali pirates have been capturing merchant ships for ransom. Suddenly, in a move that rattles the world's economies, giant oil and liquid natural gas tankers are mysteriously taken off Arabia and Africa, far out at sea in the darkness of night. Held for record ransom demands, these ships are taken to strange new pirate hideouts along the North coast of Somalia. When pirates fire on the responding international task force ships and aircraft, the world watches as an entirely new type of war at sea begins.

I requested a copy of this title from the author. He provided it understanding my review would appear here.

My Review: Tom Clancy's death in October 2013 opened the field for military thriller writers for the second time in his career. After he published The Hunt for Red October in 1984, military thrillers were once again on the readerly radar of many many men. Clancy dominated the field he had opened for almost thirty years.

Rest in peace, Mr. Clancy. Your successors are lining up to entertain the men, women, and boys of the world with tense, exciting, well-wrought storylines of high-stakes chases, maneuvers, and back-stage politicking. Here's one of the first to come out of the gate, and it's a strong contender for a place on the military thriller reader's Holiday present list.

Don't kid yourself...it's a novel, but it's not a farrago or a fanciful conceit. Branco took a very real and worsening concern for the shipping industry, piracy based in the lawless failed state of Somalia, and ratcheted up the stakes. I suspect it's only a matter of time before the book is seen as predictive instead of entertaining. If, that is, the events haven't already played out like this, only with more silencing oil poured over them.

When Jason Stewart, commanding the USS Farragut, is ordered to look into the status of a supertanker full of liquified natural gas en route from Nigeria to Mumbai, the plot kicks into high gear and doesn't stop. Alternating sections of the story are told from the major points of view...the pirates, the motivating malefactors, the loyal henchrats...seldom staying with us long enough for the reader to become inured to the action.

Back and forth, cat and mouse, and all told in a spare, clipped narrative voice that feels more like it's overheard than written for an audience, there's just barely time to get in the swing of Lt. (jg) Christine Johnson's duty shift before we're aboard a pirated vessel and experiencing the terror of a crewman about to die, and before that becomes squicky we're in a plush Moscow office listening to a very, very ruthless and unpleasant man give orders that appall the reader who rejects Ayn Rand as a moral guide.

Navy veteran Branco can be relied on for accuracy, and savvy world citizen Branco can be relied on to "get" the power dynamics of world-straddling military forces both pro and con. There is not a jot of doubt about who is doing wrong here, but there is not a hint of lazy, demonizing anticharacterization at work either. Everyone here has a motivation for acting in a particular way, and it's never simplistic.

I am obligated by my inner elitist to mention the intensely annoying lapses in observing the conventions of standard punctuation (e.g., when mentioning a city, one must use the formula "City Name, State Name," and not "City Name, State Name" and then bang on with the sentence!), and I for one do not welcome sentence fragments or dependent clauses plopped in my dialogue without commas to set them off, and don't even get me started on the series or Oxford comma so blithely ignored throughout...but overall, as witness my rating, not even these cavils led me to stop reading (a frequent occurrence, even in well-told stories) or to smack the author upside the head with a single-star rating (less frequent occurrence, as it's more or less the nuclear option when a story is poorly told).

I liked the story. I was excited to see what happened next. I'd say that any reader who laments the loss of Tom Clancy's military thriller creation machine should celebrate this Veteran's Day by ordering a copy of Bob Branco's book and sinking into a satisfied haze of acronyms and action.

This work is licensed under a Creative Commons Attribution-NonCommercial-ShareAlike 3.0 Unported License.
Posted by Richard at 8:47 AM