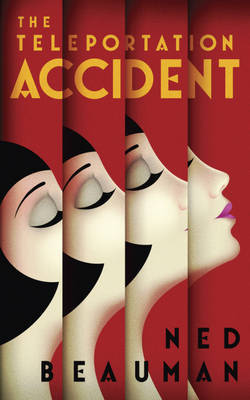 The Publisher Says: HISTORY HAPPENED WHILE YOU WERE HUNGOVER.

When you haven't had sex in a long time, it feels like the worst thing that is happening to anyone anywhere. If you're living in Germany in the 1930s, it probably isn't.

But that's no consolation to Egon Loeser, whose carnal misfortunes will push him from the experimental theatres of Berlin to the absinthe bars of Paris to the physics laboratories of Los Angeles, trying all the while to solve two mysteries: whether it was really a deal with Satan that claimed the life of his hero, the great Renaissance stage designer Adriano Lavicini; and why a handsome, clever, charming, modest guy like him can't, just once in a while, get himself laid.

From the author of the acclaimed Boxer, Beetle comes an historical novel that doesn't know what year it is; a noir novel that turns all the lights on; a romance novel that arrives drunk to dinner; a science fiction novel that can't remember what 'isotope' means; a stunningly inventive, exceptionally funny, dangerously unsteady and (largely) coherent novel about sex, violence, space, time, and how the best way to deal with history is to ignore it.

LET'S HOPE THE PARTY WAS WORTH IT.

My Review: My review, if I was up for it, would be nothing but retyping the entire novel in this space. You don't need to read my yodels of praise and warbles of inducement to buy the book, you need to read the book.

Is the book funny, as is claimed for it in so many "real" review sources? Here's something I marked on page 7:


Klugweil, meanwhile, was a twenty-four-year-old so languid as to be almost liquid, except when he went on stage and broke open some inner asylum of shrieks and contortions, wild eyes and bared teeth—which made him perfectly suited to Expressionist acting and almost useless for any other type. He'd been at university with Loesser, who had always wondered what he was like during sex but had never quite had the cheek to make an enquiry with his dull girlfriend.

What about the romance mentioned so prominently in the book's sales materials, and in "mainstream" reviews? Loesser pursues the elusive, rich, and utterly madcap Adele Hitler (no relation) across continents, despite this exchange from page 54:


"You'll fuck the man who brings your coffee just because he's handsome, and yet I chase you for two years and --"
She waved her hand as if to swat him away. "Oh, please let's not get into that again. 'Love is the foolish overestimation of the difference between one sexual object and another.'"
"Who said that?"
"I saw it on the wall at a party."
"Oh, so it must be true! And all my devotion means nothing?"
"I'm flattered, but there'd be no point in us even trying. You're the sort of man who couldn't stand it if I were unfaithful, but you're also the sort of man I couldn't help but be unfaithful to. You're that type. You're an apprentice cuckold."

Well, all righty then! That's him told. Loesser's anguished suspicion that Adele is right wars with his indignation at being evaluated, pigeonholed, and relegated to a non-starter position before he can make so much as a move. This propels the rest of the novel.

For noir tropes, we have Loesser's falling in with one Dr. Voronoff, famous in the demi-monde of Paris for his impotence cure: Insert the testicle of a monkey between a man's own testicles and let its nature suffuse the aging roué with unquenchable virility. For madame, there is a similar cure for the debilities of aging: Skin cream made from the foreskins of newly circumcised babies. Fresh, innocent skin cells from a body part famed for its stretchiness...well, what could possibly make more sense? A can't-fail nostrum for wrinkles and crow's feet! And Loesser, plus an accomplice-cum-con man called Scramsfield (who promises Loesser that he will reunite him with Adele, already vanished to Los Angeles), will happily liberate wealthy, stupid American women from their desperately needed money in order to survive the Great Depression.

After a spectacular failure in the quackery trade makes Paris too hot for Loesser, he continues his pursuit of Adele to Los Angeles, and here the story becomes an extremely strange (even stranger, I suppose) send-up of Golden Age science fiction tropes, decadent capitalist stereotypes, rumors of Hollywood loucheness, all of which so deeply informed the interwar popular culture's storytelling.

Teleportation. Actual physical teleportation. Research and development for same. It's almost incalculably difficult to imagine how this could be done on a macro scale in today's scientific universe, but thankfully Beauman hasn't set his story in our world but in 1935 (as it now is in the story). And here we come to a place in the narrative where, although there is no diminution of the chuckle-inducing phrasemaking or the wince-cringe-and-giggle observation that's characterized the book until now, the window-dressing is just that, decoration.

The heart of this book is yearning. Everyone in the book yearns for something, be it a person, a state of feeling, a quantum of knowledge, a passed opportunity, a deed desperately regretted that's in need of recall; yearning and searching for the way to fill the void left by the object yearned for. Adele, that object of Loesser's yearning, seeks to fill her own void by assisting in the creation of an actual, physical teleportation device, being the amanuensis and magician's assistant to Professor Bailey of the currently rechristened California Institute of Technology. The Professor has the most yearning of anyone in the entire book, stretching back to a time in Los Angeles history when what was then the Throop College of Technology welcomed a Midwestern boy called Bailey....

I don't believe anyone would thank me for the spoiler that completes that sentence. It's worth the trip to discover it yourself.

This novel was longlisted for the 2012 Booker Prize, and I see why. Beauman's linguistic playfulness and inventive use of tropes in ways both satirical and satisfying to trope fans is amazing when one considers his revolting youth. (He is under thirty, which I consider an affront to God. No one born after Man left the Moon for the final time to date should understand the world Beauman builds with deft and dextrous motions. Ain't natural.)

I left this reading experience amused, satisfied, and to my own surprise, quite moved. I liked the process of getting to the end of the story. I liked the scenery painted for me along the way. I liked the moral, or to give it less gravitas, the point of Beauman's engrossing, enfolding, bemusing narrative. I really want to know what happens next in Beauman's career. I hope I can keep all my buttons in the proper buttonholes until he finishes his ideas' fermentation.

I've rated the book under five stars, which all of the foregoing would seem to support, because I wasn't catapulted to a new level of spiritual awareness or aesthetic ecstasy (0.1 off), and because the dust jacket of the hardcover edition is coated in some sort of spoodge that has the hand-feel of the years-old bacon grease that coats the interior of a none-too-clean greasy spoon's range hood (0.1 off, after an entire star disappeared; seemed unfair to Beauman, since *he* didn't choose this icky stuff. If I come to find out he *did* choose it, another star off, and no mistake).

This work is licensed under a Creative Commons Attribution-NonCommercial-ShareAlike 3.0 Unported License.
Posted by Richard at 11:53 PM