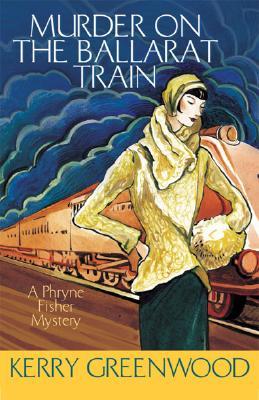 The Publisher Says: When the 1920s' most glamorous lady detective, the Honourable Miss Phryne Fisher, arranges to go to Ballarat for the week, she eschews the excitement of her red Hispano-Suiza racing car for the sedate safety of the train. The last thing she expects is to have to use her trusty Beretta .32 to save lives. As the passengers sleep, they are poisoned with chloroform.

Phryne is left to piece together the clues after this restful country sojourn turns into the stuff of nightmares: a young girl who can't remember anything, rumors of white slavery and black magic, and the body of an old woman missing her emerald rings. Then there is the rowing team and the choristers, all deliciously engaging young men. At first they seem like a pleasant diversion....

My Review: This numero tres in the Phryne Fisher series that I read all in a gulp one week. The library in my village had it not, but as I needed to grocery shop in Baldwin, a village or two over, I checked their liberry and lo and behold! They had this and only this volume in the series. Apparently the county likes to make reading an entire series into a treasure hunt.

Now, I get the whole terse and concise quiz when writing hard-boiled fiction. But why use it in these books, and to the point of being taciturn? Pages one through five, for example, take place in the first class carriage of the train to a place called Ballarat, filled with people who have been chloroformed for no obvious reason. Why is Phryne, the saviour (oh dear, oh dear, I'm coming all over Aussie) of all and sundry, on the train with Dot, her faithful Watsoness? What does an Aussie train carriage from the 1920s look like, who is on a train that's apparently taking an overnight trip, blah blah blah? None of these questions is addressed, still less answered.

The police in the State of Victoria appear, to a man, to be in thrall to Phryne's pheromonal field, allowing her to see evidence, trample crime scenes, interview witnesses, blah blah blah. The court system of the State of Victoria appears to have the greatest possible respect for the Honourable (oh oh, more misspelling a la Oz!) Phryne because it allows her, without demur or even so much as a meet'n'greet, to take serious legal steps.

Now, shoehorning two mysteries into 151pp is no small feat. Greenwood does this. She is, obviously and welcomely, growing in her craft with each outing. But what the hell does the sheila have against exposition?!? It can be done, and done well, and it can make or break an otherwise incredible story.

Characters from the first two books appear like mushrooms after a rain, and several new and obviously intended to be recurring characters are introduced. This does give the series the charm of feeling like one is involved in the life of the series. It's a trick that works brilliantly for Southern States writers like Charlaine Harris and Joan Hess. One character from the end of the previous book, "Flying Too High", appears again, to my discomfort and mild displeasure. I feel that I should caution parents of girls that some of Greenwood's recurring plotlines will cause you discomfort and should be brought to your attention early on. I do not encourage the very sensitively constructed to read this particular installment of the series.

But I, for reasons I can't yet fathom, want to keep reading these cocktail peanut books, and have in my moistly fumbling fingers books four, five and six of the series. So I guess it would be hypocritical to not recommend Murder on the Ballarat Train subject to the parent/sensitive caution given above.

Television Episode Review: How gorgeous the men are in Phryne's second televised episode, despite the book being third in the series, is a matter of opinion. I myownself don't get it in any of these men's cases. However, the sexual tension subplot gets short shrift in the 54 minutes allotted to the show.

What makes this episode noteworthy is the introduction of Phryne's ward, Jane, a young girl thief who will change the life of the terminally single and utterly unmaternal lady detective. It's also noteworthy that this is the first episode of the show that brings together the charming Scoobygroup of Dot, the lady's maid, the butler Mr. Butler, Jane the lightfingered lassie, and Bert and Cec the handymen/cab drivers/muscle, all in the same big, lovely home.

Another of my favorite characters, Phryne's beautiful red Hispano-Suiza touring car, makes her first appearance here as well. Australian Broadcasting Corporation and its production partners have done an amazing job with the design and the props and the costumes. The book, not a terribly exciting read for the reasons above, makes a good TV episode and is a pleasure to watch.

This work is licensed under a Creative Commons Attribution-NonCommercial-ShareAlike 3.0 Unported License.
Posted by Richard at 10:46 AM