The Joys of Jeeves and Wooster, Renewed at Last! 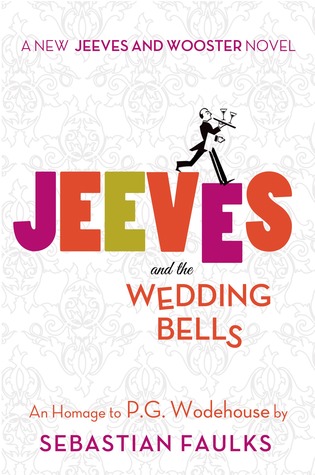 The Publisher Says: Bertie Wooster (a young man about town) and his butler Jeeves (the very model of the modern manservant)—return in their first new novel in nearly forty years: Jeeves and the Wedding Bells by Sebastian Faulks.

P.G. Wodehouse documented the lives of the inimitable Jeeves and Wooster for nearly sixty years, from their first appearance in 1915 (“Extricating Young Gussie”) to his final completed novel (Aunts Aren’t Gentlemen) in 1974. These two were the finest creations of a novelist widely proclaimed to be the finest comic English writer by critics and fans alike.

Now, forty years later, Bertie and Jeeves return in a hilarious affair of mix-ups and mishaps. With the approval of the Wodehouse estate, acclaimed novelist Sebastian Faulks brings these two back to life for their legion of fans. Bertie, nursing a bit of heartbreak over the recent engagement of one Georgina Meadowes to someone not named Wooster, agrees to “help” his old friend Peregrine “Woody” Beeching, whose own romance is foundering. That this means an outing to Dorset, away from an impending visit from Aunt Agatha, is merely an extra benefit. Almost immediately, things go awry and the simple plan quickly becomes complicated. Jeeves ends up impersonating one Lord Etringham, while Bertie pretends to be Jeeves’ manservant “Wilberforce,”—and this all happens under the same roof as the now affianced Ms. Meadowes. From there the plot becomes even more hilarious and convoluted, in a brilliantly conceived, seamlessly written comic work worthy of the master himself.

My Review: I first encountered Bertie Wooster and his fantasy England in 1972. My sister's bookstore, located on a weird little corner near the old-money part of Austin, stocked a good deal of then-living P.G. Wodehouse's books because the older ladies who patronized the place loved him. I was sitting around there one day, a little bored, and picked up Jeeves and the Tie That Binds, then the most recent book in the series. Came time for me to leave, I begged and pleaded and promised to do actual work if I was allowed to take it with me.

And thus began what is, to date, an unabated addiction. Jeeves and his endless fund of arcane knowledge became my hero immediately. Clearly he loves dimwitted Bertie...now that's not fair of me, Bertie isn't dim. Bertie is...limited...yes, that's better, Bertie has a limited intellectual scope. He's utterly dependent on Jeeves because he's never going to be able to keep up with the crowd, and he's got such a loving and generous nature that it's impossible not to see which way that parade is headed, and it's not a nice part of town.

A co-dependent relationship? Yes, probably so. Is that a problem? For whom, might I inquire? It suits Jeeves down to the ground and it's survival for Bertie. Need one's manner of living pass any other test?

Of course it raises the question of the future of each of these men. Are they locked in an eternal stasis, doomed to be each other's closest living companion? That could get claustrophobic. But hell, these are silly fantasy novels!

I see from the delights of Jeeves and the Wedding Bells that I was not alone in having these vaguely disquieting thoughts. Bertie and Jeeves are, through a combination of Bertie's yearning for his vacation romantic entanglement and Aunt Agatha's threatening to invade Berkeley Mansions' sacred precincts, compelled to quit London's fleshpots and rusticate in Melbury-cum-Kingston in aid of Bertie's pal "Woody" Beeching's romantic designs on one Amelia Hackwood, presently gone awry. it is, of course, the merest chance that Amelia Hackwood's best friend and her father's ward happens to be Georgiana Meadowes, Bertie's erstwhile vacation romance....

And we're OFF! Let the slamming door sex-farce, without the sex, commence. It is a delight to return to the world of commodious country houses staffed by efficient and tolerant worker-bees, owned by irascible, kind-hearted curmudgeons, generous if financially precarious, in need of a certain ward to make a monetarily advantageous marriage to a bland, unpleasantly parented drip so the family manse won't be sold to make a private school....

The formula is, for those susceptible to its music-box intricacies, still robust, and in Sebastian Faulks's capable hands, burnished to a new and warming glow.

Faulks has chosen, by placing Bertie in the (rather incredible) role of Jeeves' valet, to emphasize the Upstairs, Downstairs qualities inherent in the Woosterverse ab initio, but left almost entirely alone by Sir Plum Wodehouse in the original stories. We hear of the General Strike, a development that anchors the series in a specific year...1926...which Wodehouse never did. It also gives a small insight into Bertie's and Jeeves' characters, in that Bertie is utterly oblivious to the existence of the Strike and Jeeves' précis of the events is wholly favorably received by Bertie. The plot twist involving Bertie in the belowstairs world is, well, unbelievable in the extreme...Bertie wouldn't know the first thing about how to behave or what to do while waiting at table!...but all is, as usual with a Wodehousian plot, brought into satisfying retrospective focus by Jeeves' summation of the actual events, seen from a nuts-and-bolts perspective.

It is this that defines the appeal of Wodehouse's novels and stories for me: Like music boxes or magic illusions, it's all a matter of perspective as to what one sees of events. From the front of the house, there is an illusion of seamless and inevitable progress from set-up to resolution; at the end, the illusionist allows us to see the mechanics of how he fooled us into seeing only what sustains the seamlessness.

That said, there are areas of story development that are sadly deficient in this effort. I found the Venables family, in particular, received short shrift. As Venables junior is Bertie's romantic rival, it seems to me that the odious swine should be developed to be more odious so that the audience may fully despise him. Promising starts are made with his *ghastly* book-writing career, but not used nearly enough. Venables senior and mater are underdeveloped for the freight they must carry, too.

I know that, when a book is billed as an homage, it must nod frequently to the preceding works on whose developmental shoulders it stands. The many mentions of the inhabitants of the Woosterverse are inevitable. The cameos and walk-ons are as well (loved the brief appearance of Esmond Haddock, for example). A few fewer of these, given more substance, would possibly have worked more to spice and enliven the Woosterverse; as it was, the sheer bulk of the passing references gave the book a slight feel of the soap-opera farewell after a beloved actor dies and the character must be retired. Many poignant memories are evoked, but the effect can be to bring the reader out of the present book, which is the place one wants to be. After all, I paid my twenty-some dollars to be in this exact spot, didn't I?

And I love it. I batten on it. I've missed the deft and skilled application of wit and humor to novels of manners, morals, and fun. Thank you, Sebastian Faulks, thank you, Estate of Pelham Grenville Wodehouse, and thank you, Saint Martin's Press. I am refreshed and uplifted and very grateful.

This work is licensed under a Creative Commons Attribution-NonCommercial-ShareAlike 3.0 Unported License.
Posted by Richard at 9:52 AM