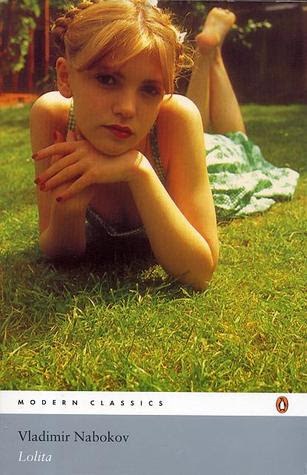 The Publisher Says: Awe and exhilaration—along with heartbreak and mordant wit—abound in Lolita, Nabokov's most famous and controversial novel, which tells the story of the aging Humbert Humbert's obsessive, devouring, and doomed passion for the nymphet Dolores Haze. Lolita is also the story of a hypercivilized European colliding with the cheerful barbarism of postwar America. Most of all, it is a meditation on love—love as outrage and hallucination, madness and transformation.

My Review: Humbert Humbert was the name of my 1999 Buick LeSabre. It was unreliable, stodgy-looking, and all too easy to sink into and enjoy the glorious creature comforts contained therein. (I miss the cassette/CD/AM/FM combo, if I'm honest.) Hum, our narrator, is a terrible man, a pedophile, a sociopath, and a complete scoundrel on so many levels it's hard to count them all.

And I *adore* him. But I'm weird that way. I adore Walter White, too.

Nabokov's third language, English, gave him the most incredible and flexible of tools for creating word-magic. This book, about the passion of an old man for a little girl, contains some of the most gorgeous sentences ever written in English.

And it's a deeply disturbing book. Lolita...Dolores Haze...is almost heartbreakingly absent from the story, which centers around Hum's sense of himself and his perceptions of his worth. The most terrifying beginning of any book I've read in my life. "Light of my life, fire of my loins," eeeeeeeeeewwwwwwwwww. But how gloriously sonorous is Hum's breakdown of the name he gave his victim. "Lo. Lee. Ta."

This book is, unsurprisingly, one of the most challenged books in the American Shamefest of Ban-Ban-Ban what *I* don't like!!!! Such a stupidly self-important way of looking at the world. "I don't like that, it offends me, it's evil, it's wrong." Then don't read it. "My child! My child could see it!" Then move to Utah or Idaho, they don't have books there, just the Book of Mormon or whatever it's called.

Take your calls for censorship somewhere else. Like church. And leave the grown-ups alone.

Does Lolita deal with horrible, offensive subject matter? Yes. Does it do so in a positive, accepting light? No. And that's unlike the "sacred texts" of every religion I've ever read...Bhagavad Gita has almost innumerable mass murders, Qur'an and Bible and Torah *very* questionable ethics like bar bets between gawd and Lucifer about just how hard they can fuck over one guy before he snaps, incest as the source of humankind (eg, Noah and family), not to mention a truly freaky-deaky kind of self-sex between Adam and Eve, who is made from Adam's body parts. But that's moral instruction, and Lolita, which savagely beats the shit out of a cultural norm of solipsism and male privilege, gets challenged regularly by the ignoranuses who can't be bothered to read it.

Or, and I suspect this is even more true, are too dimwitted to get it. Just because someone doesn't understand a literary work, or a work of art, does not make it bad or wrong or an evil influence.

Since this book was published in 1955, it's been in print. I suspect it will be in print long after I'm dead and gone. The more the haters hate on it, the more contrarians and the self-defined intellectuals will buy it.

So ban on, boobs. One day the banning you're so busy advocating will reach right back to you and your pet loves. I, for one, welcome the day no one can get religious crap without showing ID and paying through the nose and ending up on a persecution list. I hope to live so long as to see it.

No, I don't. I'd have to protest it and demand that the censorship stop. NO ONE'S IDEAS OR EXPRESSIONS THEREOF SHOULD EVER BE STIFLED just because they make me, or you, uncomfortable. Don't like something? Walk away.

This work is licensed under a Creative Commons Attribution-NonCommercial-ShareAlike 3.0 Unported License.
Posted by Richard at 1:28 PM