CHRISTIAN NATION, a cautionary tale about believing the Believers 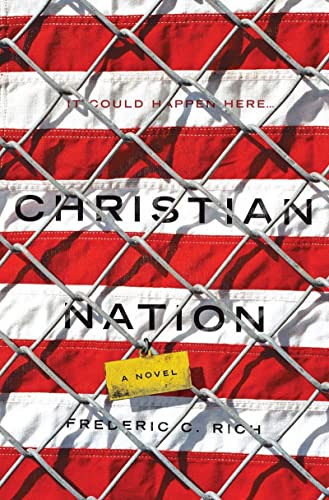 It's Banned Books Week, so we are well advised to think about what the ability to ban a book really means.

“The biggest mistake that we can make is that we don’t believe that they believe what they say. And for many of them, they do mean exactly what they say," says author Frederic C. Rich in his Politico.com interview from this past July. Look at the Texas school textbook adoption wars over presenting creationism as a scientific theory. All of those folks are elected...by the few who bother to show up, and those are usually the wingnuts from the religious right with an agenda to impose.

So ends the first chapter of this brilliantly readable counterfactual novel, reminding us that America’s Christian fundamentalists have been consistently clear about their vision for a “Christian Nation” and dead serious about acquiring the political power to achieve it. When President McCain dies and Sarah Palin becomes president, the reader, along with the nation, stumbles down a terrifyingly credible path toward theocracy, realizing too late that the Christian right meant precisely what it said.

In the spirit of Philip Roth’s The Plot Against America, one of America’s foremost lawyers lays out in chilling detail what such a future might look like: constitutional protections dismantled; all aspects of life dominated by an authoritarian law called “The Blessing,” enforced by a reconfigured Internet known as the “Purity Web.” Those who defy this system, among them the narrator, live on the edges of society, sustained by the belief that democracy will rise to triumph over such tyrannical oppression.

My Review: Every Banned Books Week we are well advised to think about what the ability to ban a book really means. In Author Rich's novel, banning a book is no longer a concern. The apparatus of theocracy has taken over the libraries. Nothing so trivial as banning A book is necessary, slate entire areas of human knowledge for destruction. Pulp those books that don't tell the story you want told. Knowledge dies, after all. We saw that after the fall of the Roman Empire. The only libraries were in monasteries, and the only works supposed to be preserved were dogmatic, didactic christian texts. Fortunately, some subversives hid works by Lucretius, Epicurus, Juvenal, Suetonius, in their stacks. As theocracy self-destructed, as all -ocracies (including dem-) inevitably do, sharp-eyed secularists found these works and brought them out into the public gaze for the first time in as much as a millennium. (For more about this, see my review of The Swerve.)

Think about that. For a millennium, a thousand years, knowledge that might have led the world out of pervasive hunger, away from destructive hatred and war over trivia, was hidden away so it would at least survive as words on paper. It couldn't be discussed, because it couldn't be read. It was banned. Very effectively and efficiently banned. When the ban was lifted, the world's best brains went into overdrive and they've never slowed down since.

Yet we still, after this excellent example of the benefits of freedom of thought, freedom of expression, freedom from the fear that censorship breeds, we still have to fight the well-meaning, well-intentioned, and always wrong "moral protectors" and "nicey-nice police." It doesn't have to start big, and in fact, that is author Rich's point in this novel. His story, of a subversive in the Christian Nation, a convert to the Church of God in America from the losing side in the Seige of Manhattan, starts with the run-up to the 2008 election. In Rich's horrifying nightmare, McCain and Palin won, and then they did what they said they would do: They "restored American to a Christian Nation." They used your smartphone with its eternal connection to communication satellites to track you. It's the law that you must have it on you. It's the law that every device you use must be connected to the Purity Web (which we call universal wi-fi connectivity, and long for!) that your every utterance or interface with another person be monitorable.

Imagine how many petaflops of information this state collects. And sifts. And uses against its citizens, but only in the kindest of spirits and in the expectation of their draconian rules and totalitarian controls bringing all souls to the Rapture as pure as is possible.

This kind of nightmare is all too possible. Look at the Taliban in Afghanistan. Look at the rhetoric coming out of the Tea Party. No, no, says the complacent and lazy citizen, who can't be bothered to vote for school board members or participate in electioneering, no way can that happen here.

“The biggest mistake that we can make is that we don’t believe that they believe what they say. And for many of them, they do mean exactly what they say," says author Rich in his Politico.com interview from this past July. Look at the Texas school textbook adoption wars over presenting creationism as a scientific theory. All of those folks are elected...by the few who bother to show up, and those are usually the wingnuts from the religious right with an agenda to impose.

This novel is set in a world that didn't happen, where the battle against censorship costs lives. Those lives are lost because, in that world like this one we live in, so very many of us can't be bothered, don't want to, are too tired or bored or stressed or lazy to, stand up and say NO MORE when censorship is proposed or imposed. And Rich, a high-powered financial industry lawyer, works with the kind of people whose money-making and self-interest are tightly bound up with the trends in thought and speech around the world. In short, if he doesn't know from the inside whereof he speaks when he speaks about the consequences voicelessness, of stifled freedom to speak and think as one desires, no one alive does.

Read the entire review at Shelf Inflicted, a Group Blog.
Posted by Richard at 2:25 AM