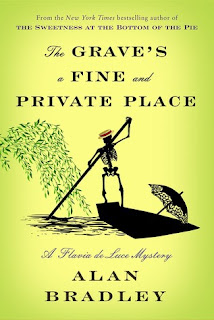 The Publisher Says: Flavia is enjoying the summer, spending her days punting along the river with her reluctant family. Languishing in boredom, she drags a slack hand in the water, and catches her fingers in the open mouth of a drowned corpse.

Brought to shore, the dead man is found to be dressed in blue silk with ribbons at the knee, and wearing a single red ballet slipper.

Flavia needs to put her super-sleuthing skills to the test to investigate the murder of three gossips in the local church, and to keep her sisters out of danger. But what could possibly connect the son of an executed killer, a far too canny police constable, a travelling circus, and the publican's mysteriously talented wife?

My Review: Not the best entry in the series. The subplot about the poet was underused; the subplot about the kid, Hob Nightingale, was rushed through and gave nothing useful to the resolution; Carl Pendracka is mentioned but not meaningfully (being American, I suppose he was destined not to be anything except comic relief); I liked Dieter's cameo...but really, is there any point to mangling the book? It's the NINTH in a series by an 80-year-old accidental author!

The major news, at least for me, comes from the author's announcement month before last of the CBC TV series based on the books. I can't imagine how they'll make this into anything like the fun thing the reads are; somehow it seems unlikely they'll find a Flavia, but it's not my job to do any of it so good luck to 'em all.

If you're not already a series fan, don't start here. If you stalled out around book seven, As Chimney Sweepers Come to Dust, as I did, it's worth keeping on. If your stall came earlier in the series, maybe it's not for you. This book won't, in my never-humble opinion, change anyone's mind one way or another.

The issue really is about the sense I have that Author Bradley is losing control of, or interest in, his subplots. The Nightingale family is at best sketched in; Flavia's discursive ruminations on chemistry are foregrounded; in fact, quite a lot of verbiage that feels to me like filler is Flavia's tangential blahblahblah. Some of that is charming, and too much (where I feel this book's iteration of it falls) is tedious and takes page time away from more important or, at least to me, interesting subjects to cover. Some of them, like the aforementioned Nightingale family, could very reasonably be seen as crucial to the plot and therefore the scanted attention to them and their history is a significant defect. I felt the same way about Undine's sketchy appearances after being introduced. At least she's mentioned again in this book.

Well...everything has its time, and permaybehaps the time for Flavia has ended. The next book, likely to be the last, has not come too soon.
Posted by Richard at 9:59 AM