ANY OLD DIAMONDS, first entry in the Lilywhite Boys series of caper novels 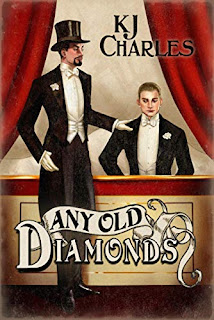 The Publisher Says: Lord Alexander Pyne-ffoulkes, the younger son of the Duke of Ilvar, holds a bitter grudge against his wealthy father. The Duke intends to give his Duchess a priceless diamond parure on their wedding anniversary — so Alec hires a pair of jewel thieves to steal it.

The Duke's remote castle is a difficult target, and Alec needs a way to get the thieves in. Soldier-turned-criminal Jerry Crozier has the answer: he'll pose as a Society gentleman and become Alec's new best friend.

But Jerry is a dangerous man: controlling, remote, and devastating. He effortlessly teases out the lonely young nobleman's most secret desires, and soon he's got Alec in his bed—and the palm of his hand.

Or maybe not. Because as the plot thickens, betrayals, secrets, new loves, and old evils come to light. Now the jewel thief and the aristocrat must keep up the pretence, find their way through a maze of privilege and deceit, and confront the truth of what's between them... all without getting caught.

THIS WAS A YULE GIFT FROM MY YOUNG GENTLEMAN CALLER. THANKS HONEYBUNCH AND YOU CAN READ IT NOW.

My Review: Three instances of the vile, not-to-be-countenanced w-bomb. Two heinous, one of those so so so horrible (ON THE LAST PAGE!) it alone cost that quarter-star dock. One actually not that awful.

I can not believe I just typed that.

The cover art of this book makes me smile big'n'pretty. I'd've read it just to have that on my Kindle, had I known nothing of KJ Charles's previous ouevre. (I did...see my The Magpie Lord et seq. reviews.) But lucky me, this is vintage Charles! This is a lovely excursion into late Victorian London via a young, hard-up aristocrat who finds some jewel thieves to do his wicked stepmother dirt by relieving her of an £11,000 (about £150,000 today) diamond parure.

Hijinks ensue...as always...but let me just warn you that there are quite some several events on the way to resolution that cause the sensitive reader some serious collywobbles. I came close to invoking Cthulhu's attention to Author Charles during one or more of those moments (e.g., 63%, 86%), pulling back from the brink of madness barely in time. After all, we're taught from the cradle to praise Cthulhu...He hasn't noticed you yet. So. There's that.

But what a treat the good bits were. I am a sucker for Dominant/submissive romantic reads. This is clearly something Author Charles gets to the tips of the typing digits. These scenes are just flat wonderfully imagined, created, and inserted into the narrative. (Yes, that was me *not* making the dirty double entendre. You're welcome.) In this book, the submissive's consent and limits are so deftly woven into the narrative that I had to flip back to be sure they were there (even when they weren't one memorable time). Yeah, that's my story and you can't prove that's not why there's a finger-dent in my Kindle's screen.

Which brings me to a point I should make very clear: I am not recommending this to my heterosexual acquaintances. You will blench and clutch your pearls at least four times. Not straight safe! No! Don't!

Then there's the other great pleasure of this read. The big one, maybe, since it's something I like in series reads. We're dealing with new stories populated by characters from books past...but honest and truly, that's not a requirement to understand the motives and impulses front and center in this book. The relationships are there, but they aren't foregrounded. Whatever you need to know in order to enjoy this story is put there on the page, economically but unstintingly.

Anyone into the D/s lifestyle will find a welcome, sensitive aura of acceptance here (as in The Secret Casebook of Simon Feximal, which is also excellent); anyone inclined to read MM romantic fiction should already know Author Charles's work; but don't hesitate to adventure into these waters, caper-story readers. At its heart, Author Charles has given us a well-made caper with twists and turns to satisfy all but the sexually squeamish among us.
Posted by Richard at 8:04 PM