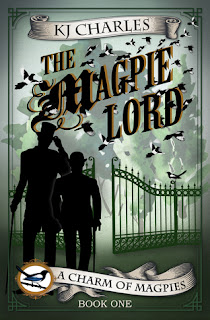 The Publisher Says: A lord in danger. A magician in turmoil. A snowball in hell.

Exiled to China for twenty years, Lucien Vaudrey never planned to return to England. But with the mysterious deaths of his father and brother, it seems the new Lord Crane has inherited an earldom. He’s also inherited his family’s enemies. He needs magical assistance, fast. He doesn't expect it to turn up angry.

Magician Stephen Day has good reason to hate Crane’s family. Unfortunately, it’s his job to deal with supernatural threats. Besides, the earl is unlike any aristocrat he’s ever met, with the tattoos, the attitude... and the way Crane seems determined to get him into bed. That’s definitely unusual.

Soon Stephen is falling hard for the worst possible man, at the worst possible time. But Crane’s dangerous appeal isn't the only thing rendering Stephen powerless. Evil pervades the house, a web of plots is closing round Crane, and if Stephen can’t find a way through it—they’re both going to die.

My Review: I've invested a lot of energy in denigrating phauntaisee and majgickq in books. I really don't like some of the stuff, the more closely it resembles Lord of the Rings or A Song of Ice and Fire the less I like it, but the reality is that this stuff can be used very well. In the hands of Author Charles, who can write this:


The tide was coming in up the Thames, not far away, and Stephen sensed salt water rippling, the surge of boats, wet wood and sailcloth, the quiet throb of the garden around him, but mostly he could feel Crane, sharp and silver, standing out from the surrounding world like a knife in a drawer full of wooden spoons.

it is hard to imagine any trope could be misused. There's always a risk, of course. But I feel confident that I am not going to be let down in my gladly extended faith.

The problems I still have with books featuring majgickq are lessened when, like Author Charles, one goes to the trouble of thinking the actions and reactions necessary to make the manipulation of the world work consistently. The Magpie Lord, ancestor of Lord Crane, our main character, is never explicitly described nor is his codification of majgickq's workings explored.


"Isn’t there some other way for you to get power?” (Lord Crane is petulantly complaining to Stephen here.)
“Like what?”
“Magic wands. Magic rings. The Holy Grail.”
“You have that here?”
“If I do, someone probably carved a magpie on it. Does it exist?”
“You wildly overestimate the extent of my knowledge,” Stephen said.

I nevertheless was convinced by the fussiness and sticklerishness of Day, the judiciary of magical crimes hired to deal with the Magpie Lord's various magical issues, that the system of this world was well thought out and believable enough for me to move on.

And move on I did. I enjoyed the sexual heat between the men. I approved of the sheer unbothered indifference of Lord Crane to the heaping plate of social disapprobation he's served for being different, foreign almost. Day, no aristocrat (and seemingly almost a Republican in the UK sense), allows his family's bitter history with Crane's family to color their every interchange. It lends this story a lovely enemies-to-frenemies-to-lovers dynamic that more often than not works well for me. It affords me the opportunity to size up characters in their rounded, 3-D being, which is an index of how well I will respond to a given author's thought processes.

Author Charles, in this outing, comes through my maze of mishegas and misanthropy with nary a hair out of place. Another series to follow with eager gratitude for the pleasures I am confident I will receive.