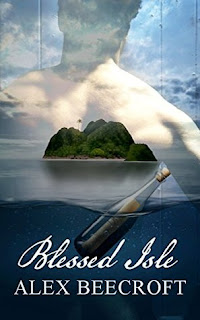 For Captain Harry Thompson, the command of the prison transport ship HMS Banshee is his opportunity to prove his worth, working-class origins be damned. But his criminal attraction to his upper-crust First Lieutenant, Garnet Littleton, threatens to overturn all he’s ever worked for.

Lust quickly proves to be the least of his problems, however. The deadly combination of typhus, rioting convicts, and a monstrous storm destroys his prospects . . . and shipwrecks him and Garnet on their own private island. After months of solitary paradise, the journey back to civilization—surviving mutineers, exposure, and desertion—is the ultimate test of their feelings for each other.

These two very different men each record their story for an unfathomable future in which the tale of their love—a love punishable by death in their own time—can finally be told. Today, dear reader, it is at last safe for you to hear it all.

My Review: I've been reading Alex Beecroft's books since her debut, Captain's Surrender, came out in 2008. I loved it. I gave it to my then-dating partner, Frank, because as a firefighter and a closeted married man I thought he'd really identify with the plight of Peter Kenyon; he ended up coming out, though not divorcing, and pursuing his career as a professional full-time firefighter instead of a cop volunteering as one. "Life's too short," he told me, "and I can't hide anymore."

So now I read all Author Beecroft's books because I like them and because I have a great memory associated with her work. This short tale of Paradise Lost and Purgatory Gained is in the Age of Sail, the Hearts of Oak days, and features the same reality that opened Frank's eyes and heart: Hiding your true self for fear of the consequences. Hiding love, impossible as that really is, to protect your livelihood and your loved one's safety. How horribly painful that is for all concerned. How unfair to even the worst of one's associates. No one is unscathed by this level of dishonesty, and Author Beecroft makes that clear, and illuminates the awful consequences to all concerned.

And the storytelling format, the journal entry end of epistolary noveling, is a further guarantor that both the HEA and the sex levels will remain clear from the start. Not many people speak openly and honestly about their sexual experiences even in a journal. So, well, some glossing is expected, right?

Garnet loves Harry, Harry loves Garnet, society keeps them apart and the entire time they're complicit in the social order's disapproval of their feelings they hate themselves for being so dishonest. What does it cost a man to leave The System?


It shall not be the least of my regrets that I misjudged you so. I am always doing it. You make play of being charmingly reckless, a rake without responsibility, but I should have known you better than that. I am not worthy of you. Not now, and not then.

Less than it costs to stay.


Hours spent either in solitude or in the company of other men seemed grey and barren. Yet my hours with him were a torment of constant awareness and yearning. Without him in the hammock beside me, hot and restless and fidgeting in his dreams like a big dog, I could not sleep.

This, then, is the gift that Author Beecroft has: Making the pain and the passion of loving outside the edges of Society's limited vision vivid and real to those who don't or can't or won't go there themselves.


But as he continued to work out the details of our onward journey, it did finally occur to me that he was giving up his refuge, his true self, for my sake. He was facing again everything he feared, simply because I wished it.

Another happy Royal Navy Read. Thanks, Alex!
Posted by Richard at 12:00 PM