Time again for #Booksgiving! The lovely Icelandic idea of a Book Flood 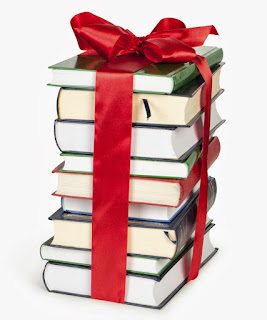 As 2018 wanes, taking with it a boatload of misery, trouble, strife, and negativity, let's focus on something much more fun: #Booksgiving! Between Black Friday and Christmas Eve, I'm here to suggest some literary delights whose (not always) joyful tidings will make the Night Before Christmas a bit less frenetic: Give everyone in your gift-giving circle a special book to read right then and there, in the midst of life, all together.

I promise that it only feels that way.

Iceland also has an Icelandic Literature Center, according to a 2013 BBC News report, which quotes Agla Magnusdottir (head of the Center as of the article's writing in 2013):


"Writers are respected here," Agla Magnusdottir tells me. "They live well. Some even get a salary." Magnusdottir is head of the new Icelandic Literature Center, which offers state support for literature and its translation.

Yrsa Sigurdardottir, Arnaldur Indriðason, Ragnar Jónasson ring any bells, mystery series lovers? All Icelandic. A book I adored, Moonstone: The Boy Who Never Was by Sjón, is Icelandic historical gay fiction. There's a niche for you.

Now think about it. Those writers have achieved popularity in the US market, easily ten times the absolute size of the Icelandic home market, and largely thanks to their government. Pause a moment. Think about that. Writers getting a state-supported salary so they can write. Translators of foreign-language books getting the same. Yea verily, it sounds like heaven.

But is the US actually so different? Most books in our market are published around gift-giving holidays, too. Look up any statistical source you can think of and you'll see the jaw-dropping surge in sales in each and every segment around Yuletide. Black Friday got its name from more than the salesdroids' moody misery on the horrible, horrible day; it's the day that almost all retailers stem their losses and go into black balance-sheet ink.

And it's not like there are no initiatives to encourage the bookish to share their addiction in the Holiday season. Take #GiveBooks, which is described in this Publishing Perspectives piece. It's admirable, and I suggest that you all put some money into the outreach for underserved children to get books. After all, the Jesuits' founder, St. Ignatius Loyola, famously said, "Give me the child for the first seven years and I will give you the man." Knew his onions, did that old guy. He stole from the best, seeing as Aristotle said it first. You can tell because there's neither hide nor hair of "woman" in there, nor any sign that either of those old white men even sensed their absence. I'd recast it as "...I will give you the adult," but purists would be as vocal as feminists in their scorn. One cannot win. 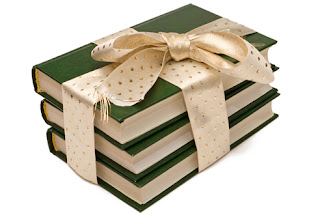 Let's celebrate the process, shall we? Let's have Booksgiving! Starting on *shudder* Black Friday, let's think about what books we'll flood the tree skirt with on Book Flood Eve. I'll give you some ideas from my 2017 and 2018 reading to include in your purchases.

Happy Booksgiving!
Posted by Richard at 10:48 AM