FLIGHT OF MAGPIES, third book in A Charm of Magpies series 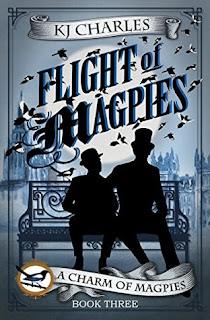 The Publisher Says: Danger in the air. Lovers on the brink.

With the justiciary understaffed, a series of horrifying occult murders to be investigated, and a young student flying off the rails, magical law enforcer Stephen Day is under increasing stress. And the strain is starting to show in his relationship with his aristocratic lover, Lord Crane.

Crane chafes at the restrictions of England’s laws, and there’s a worrying development in the blood-and-sex bond he shares with Stephen. A development that makes a sensible man question if they should be together at all.

Then a devastating loss brings the people he most loves into bitter conflict. Old enemies, new enemies, and unexpected enemies are painting Stephen and Crane into a corner, and the pressure threatens to tear them apart...

My Review: Wow. What a way to lead out of these characters' time as the focus of this universe! I am truly amazed at how deep and visceral my emotional response to this story was. Author Charles made me go there, that dark and violent place of fear, more than once in this read. Stephen and Lord Crane are stretched to their individual and collective breaking point by the stupidity and venality of the Victorian society they live in, they are each brought low by their shared but challenged love and respect for each other, and they are as far away from (and as close to) their richly deserved Happily Ever After as two can be. From here on, it's
************SPOILERVILLE************
so stop if you don't want to know!
************************************
.
.
.
.
My favorite scene of the entire series happens in this story. Lord Crane, goaded by Stephen's evident lack of care for his own safety and health, blows up and has it out with him. In that special way that only those committed to each other by bonds stronger than romantic love can afford to risk, Lord Crane lets loose the concentrated and deeply buried agonies of a law enforcement man's spouse:


“I quite understand that you can barely spare the time for us, to see each other, or wake up together, or take a few days at Christmas. I understand that you’re too preoccupied with your daily agenda to deal with a murderer who wants me dead. However, I struggle to see how you were too busy to even mention a significant threat to my continued existence instead of letting me believe it was under control!”

This howl of resentful fearful worry for self and spouse can't happen between romantic partners. It's the sole province of the spouse. It's real and it's raw and it's why Author Charles has legions of dedicated customer/reader/followers. This isn't fluff romance, this is full-blown and genuine relationship fiction. If one of the parties was female, this story would be in hard covers and have a Noble Profile lady with a Big Brute walking away down rainy streets. What keeps Crane there?


“I'm a very busy man," Crane said. "But I suppose I could force myself back here, lick you all over till you're begging for my cock, and then fuck you so hard they'll hear you screaming in the street. If you insist.”

There are several other wonderful scenes, of course, as Stephen battles the all-too-human idiocy of the Justiciary (the bureaucracy that polices magic in this universe); but few to top that one for utter fidelity to the reality of being an ordinary person's mate. Another fun moment later in the story is:


“Listen. Whatever the hell is going on...we will face it together. You and me. No more pissing about, Stephen, no more trying to do it all yourself, or to run the world single-handed. You will ask for help, you will take it, and you will put us first. That's not negotiable, understand?”

Lord Crane's had his fill of being the supplicant waiting for Stephen's time to free up, and not one second too soon if you ask me. Stephen's talents as a crime-fighter are being stretched too far quite deliberately. He's even set on the trail of someone quite reminiscent of the young Stephen, and of whom he says:


You're remarkably uninteresting for a flying trollop.

Savor that for a moment...the pungent tang of sarcasm, the rotting reek of jealousy, the chilly snark of condescension...leading at last to the moment when Stephen realizes:

Thank the good goddesses it's positioned where it is, at the ending of this strand of the story, because I dearly want these stories to remain fresh!
Posted by Richard at 6:30 AM