A CASE OF POSSESSION, second book in A Charm of Magpies series 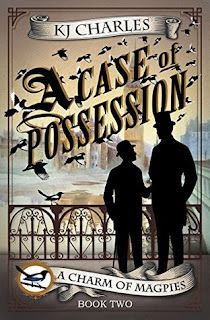 The Publisher Says: Magic in the blood. Danger in the streets.

Lord Crane has never had a lover quite as elusive as Stephen Day. He knows Stephen’s job as justiciar requires secrecy, but the magician is doing his disappearing act more than seems reasonable—especially since Crane will soon return to his home in China. When a blackmailer threatens to expose their illicit relationship, there's only one thing stopping Crane from leaving the country he loathes: Stephen.

Stephen has problems of his own. As he investigates a plague of giant rats sweeping London, his sudden increase in power, boosted by his blood-and-sex bond with Crane, is rousing suspicion that he’s turned warlock. With all eyes on him, the threat of exposure grows. Stephen could lose his friends, his job and his liberty over his relationship with Crane. He’s not sure if he can take that risk much longer. Crane isn’t sure if he can ask him to.

The rats are closing in, and something has to give…

My Review: Not quite five...although it was set to be...because when the enemy was vanquished, there were still things to be done that weren't. The dead men, the story that inspired the hideous plague of rats were not tied together anywhere near well enough.

But the men are, as always, a delight, and the magpies in their various forms are outstandingly well used. There is nothing not to like in the character development department. That's the main delight for me. These men love each other, are infatuated by each other, think constantly about how they feel connected and understood and treasured:


“You look like the cat that swallowed the cream," Stephen said softly.

Dirty talk! Not explicit, but plain, and used within these two men's private space. I approve.


“My life changed four months ago, and I utterly failed to understand that until just recently, and therefore… I may have omitted to tell you that I love you.”
He took a breath.
“That’s all.”

Sweet talk! Clear, precise, unambiguous love-making. It's a refreshing characteristic of written MM romances that is all too frequently missing from MM real-life loves. (That was not a dig, Rob, I promise. I love you!)

There could be a lot more of this majgickq system used and explained, but that's the fun of a series, making discoveries as we go along! And Author Charles already knows the answers to the questions I'm thinking up. I am confident of that. These reads make that completely clear: I am in confident, powerful hands as I read, following a competent guide through a well made maze.


“I don't believe in demons and pitchforks. But I think, if you had to define hell, you could take a good man and deny him the rites he believed in, and condemn his soul to a slow process of corruption until it was nothing but a mass of rage and hate and seething evil that his true self would have loathed. I think that would be hell.”

And that's exactly the place that this entry in the series happens, the space where free will is a commodity that any character can be deprived on in an instant. The backstory from Lord Crane's misspent youth in China is at the forefront of this story. For Stephen Day, it's as if the beguiling whiff of Difference that Crane gives off is suddenly transformed into the reek of the charnel house as the men do their dead-level best to head off a plague of grudge-holding magical meanies with their roots in China.


“Nobody ain't going to lay a finger on you, missus," said {Lord Crane's muscle/valet}. "Not while me and my lord are standing. You tell Mr. Day about it and don't worry no more."
"Since when did you talk to law?" demanded {a witness they need to hear from} in Shanghainese.
"Since his nobility's fucking it. You want the shortarse on your side.”

What fun. What a delicious escape from the dystopian epic I'm sure I fell into by accident. I want to go home now, please. But in the meantime I have Lucien and Stephen to keep me distracted.


“Everyone can do evil. Some people can be forced to it, and some fight against it, and some don't even need an invitation.”

I'd like to return to the parallel universe where fewer people fall into the last category now.
Posted by Richard at 5:30 AM