PYRE AT THE EYREHOLM TRUST, an Urban Fantasy set in Prohibition-like times 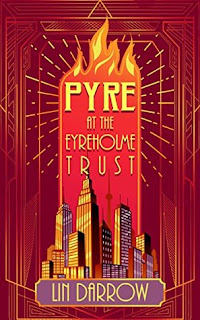 The Publisher Says: In Temperance City, the streets are ruled by spelled-up gangsters, whose magic turf wars serve as a constant backdrop to civilian life. With magic strictly regulated, Eli Coello—whip-smart jewelry salesman by day, sultry torch singer by night—has always found it advantageous to hide his magical affinity for ink.

All that goes up in smoke the day Eli is forced to use his magic to foil a jewelry heist, and in doing so unwittingly catches the eye of Duke Haven, leader of the fire-flinging Pyre gang. Seeing a useful asset, Duke promptly blackmails Eli into providing unregistered spellwork.

Duke needs Eli's ink-magic to help him pull a dangerous con against a rival gang. As the heist comes together, Eli finds himself drawn deeper and deeper into the Temperance underworld—and, perhaps most dangerously, to Duke himself.

GIFT OF MY SWEETIE'S FOR OUR MUTUAL PLEASURE. THANKS!

My Review: I won't say this lovely urban fantasy was rushed, but the pace was quick and the world-building was dense. The 1920s-era Prohibition-y setting of Temperance (haw) and its shabby speakeasy culture was different and very welcome. Duke, a small-time grifter with ambitions and self-discipline issues meets Eli, a jewelry salesman with secrets galore, in the course of business: He robs Eli's employer. Hijinks ensue.

The magic system of this world is material-centered, like Charlie Holmberg's in The Paper Magician et alii; Eli's an inkman, a manipulator of all inks whatever they rest on. You can imagine that the authorities of this world view Eli as a threat, since forgery can have no better friend than a magician who can make ink do their bidding. Duke, on the other hand, is a fireman, whose entire body is a conductor and creator of fire that can be molded and shaped and directed. Needless to say, the authorities are as scared of what Duke can do as of what Eli can do, only more so. Both characters are viewed as Other because of their powers, though not because they're gay or bi or trans. They're those things as well. They just aren't considered important. We're given this certainty in the very first scene of the book, and that was when Author Darrow grabbed me. You're gay? Mm, that's nice, pass the salt. You're an unregistered inkman?! WORKING IN A JEWELRY STORE?! ZOMG THE SKY IS FALLING!!

That's how I like it. Gay = uh huh, but magic = fraught. In other words, unlike the world I inhabit (for all I know you're reading this in a parallel universe), who you love isn't as interesting as with whom you're gettin' it on...gossip still rules and riles. And my long-standing animus towards the sheer silliness of Magjickq and its attendant random capitalizations of words to Indicate their new Uses is shown to be soothed by placing it in the hands of gay men.

I fear I am as bad as those I've criticized for refusing even to expose themselves to a gay male perspective on the world: I no longer want to hear from straight people. Shut the fuck up, you've monopolized the conversation long enough.

This is especially distressing to me in light of the fact that I called a former friend out on her use of the offensive and sexist term "mansplain" recently. My point to her, which she roundly rejected, was that fighting sexism in language wasn't a one-way street. Her response was the perfect, textbook mirroring of condescending maleness when our sexist assumptions are called out.

So while I'm reveling in hearing my worldview represented and my concerns addressed, I'm staunchly ignoring a huge swath of the world. Oh the hypocrisy. Oh the humanity, too.

So while Eli hid secrets from his employers, hid himself from Duke as best he could, and set in motion a trainwreck of a plot climax, I was purring contentedly. When the moment came for the Big Reveal, I was deeply enmeshed in the emotional undercurrents and sussing out the relationship complexities that each man had. The ending was lovely in that it included each character's full self, known and accepted as is, and set the stage for further explorations of how those complex traits could intertwine and grow.

Good fiction, in other words. And good storytelling, too. Look at my notes and you'll see if Author Darrow is singing in your key if not precisely your song. For me, there can't be more of Eli and Duke's world soon enough.
Posted by Richard at 7:31 AM