MOONSTONE, who feels very much like he WAS there despite the novel's subtitle 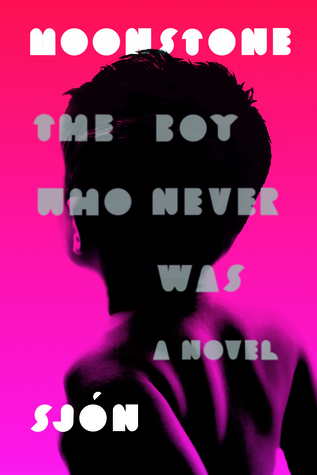 The Publisher Says: The mind-bending miniature historical epic is Sjón's specialty, and Moonstone: The Boy Who Never Was is no exception. But it is also Sjón's most realistic, accessible, and heartfelt work yet. It is the story of a young man on the fringes of a society that is itself at the fringes of the world--at what seems like history's most tumultuous, perhaps ultimate moment.

Máni Steinn is queer in a society in which the idea of homosexuality is beyond the furthest extreme. His city, Reykjavik in 1918, is homogeneous and isolated and seems entirely defenseless against the Spanish flu, which has already torn through Europe, Asia, and North America and is now lapping up on Iceland's shores. And if the flu doesn't do it, there's always the threat that war will spread all the way north. And yet the outside world has also brought Icelanders cinema! And there's nothing like a dark, silent room with a film from Europe flickering on the screen to help you escape from the overwhelming threats--and adventures--of the night, to transport you, to make you feel like everything is going to be all right. For Máni Steinn, the question is whether, at Reykjavik's darkest hour, he should retreat all the way into this imaginary world, or if he should engage with the society that has so soundly rejected him.

**THE PUBLISHER PROVIDED ME WITH A REVIEW COPY AT MY REQUEST**

My Review: The first two paragraphs:


The October evening is windless and cool. There is a distant throb of a motorcycle. The boy puts his head on one side to get a better fix on the sound. Holding it still, he tries to work out the distance; to hear if the bike is coming closer or moving away; if it's being ridden over level or marshy ground, or up the stony slope on the town side of the hill.

A low groan escapes the man standing over the kneeling boy. With his back pressed to the cliff, the man appears to have merged with his own shadow, become grafted to the rock. He groans again, louder, in increasing frustration, thrusting his hips so his swollen member slides to and fro in the boy's mouth.

I don't have any idea what I was expecting from this story, but this surely was not it. I had heard tell of Sjón as I expect most serious readers will have done. I hadn't either noticed or encountered those who had mentioned the fact that he is perfectly comfortable discussing the meatiness of sex and the cultural hypocrisy that surrounds sexuality all over the world. I haven't heard of Iceland being particularly enlightened about queerness. Combine all these lacks and you get a surprised old man gaping at the first page of this internationally acclaimed novel, wondering (not for the first time) if those warbling from the treetops about how wonderful this book is have really read it.

Color me cynical, I guess.

Máni Steinn, Moonstone in English, has led a stressful and unhappy life. His loss of family and inability to fit in to his peer group are central to his sense of himself as Other, not one of the lads or lasses. He creates his own family of sorts by turning tricks for his cash and living his real life in the cinemas (two!) of Reykjavík. The boy lives with his great-aunt because no one else could or possibly would take him in. As she is well past her prime and unable to do a lot for him socially, Máni is left as free as any misfit could ever wish to be, enabling him to act freely and without fear of discovery as he memorizes the important things in a lad's life: the sound that each unique vehicle in the small country makes, the faces and trades and residences of his tricks, the existence of the Cool Kids' Set and their activities. This being 1918 Máni is about to learn something of the outside world in stark and cruel relief. The Spanish Flu is creeping up the shores of Iceland where it will alter his life forever:


The photographer hands the boy three krónur:
--I'm afraid you won't be as busy for a while, pal.

The boy shrugs and heads back out into the rain.

The photographer was one of his first gentlemen. It was from him that he acquired the photograph of Muggur. The picture shows the artist in a black suit, with bangs down to his eyes and a roguish smile on his lips. There is a cigarette in his hand, which he must have lowered the instant the shutter opened.

The movement of his arm is sketched in the air as if Muggur had made a brushstroke in time.

The moments of 1918 will be limned in Máni's mind's eye forever. As well as World War I reaching its spavined conclusion, 1918 saw Iceland freed from the long colonial rule of Denmark and one of its immense supply of volcanoes erupting near to Reykjavík. For Máni, all of this was merely background noise as his survival from the flu and his discovery in flagrante delicto with a Danish sailor on the day that Iceland's independence was formally announced leads his unsettled life into yet another configuration. His adoration for the film world and its probable effect on his abnormality is clearly analyzed by a famous doctor whose henchman Máni had been until the dalliance with the Danish sailor comes to light:


Anyone who has observed a child playing with a doll will know how intently the child examines it by touch as well as gaze. Fingers and eyes probe the physical form with the precision of a master surgeon who has been assigned the duty of dissecting a body to the bone. Every nook and cranny is inspected; nape of neck and ear, groin and instep are caressed.

In the same fashion, the cinema audience scrutinizes the light-puppets on the silver screen, and whether it is the curve of Asta Nielsen's back, Thede Bara's naked shoulders, Pina Menichelli's sensual eyelida, Clara Kimball Young's slim ankles, Musidora's Cupid's bow, Gunnar Tolnæs' strong fingernails, Douglas Fairbanks' firm thighs, or Max Linder's soft eyes, the body part in question and its position will become the focus of the viewer's existence and etch itself into his psyche, while the size of the image and the repeated close-ups of lips, teeth, and even tongues will exacerbate the effects until few have the strength to resist them.

Film is thus immoral by its very nature, transforming the actor into a fetish and fostering perversion in the viewer, who allows himself to be seduced like a moth to the flame. The difference lies in that the cinema audience's appointment is with the cold flicker of the flame rather than the searing fire itself.

(itals in original)
It amazes me the facility with which Sjón operates equally lyrically when describing the antiquated views of the doctor and the simple survival techniques of Máni. Never does one feel like a foil for the other. In this compact and beautiful novel, each character is accorded that respectful tacit acknowledgment of his or her uniqueness and validity.

Such a terrific feat in life, still less in art. This story is a joy to read; Sjón is a welcome addition to my pantheon of superb writers, and his translator Victoria Cribb earns my slack-jawed admiration for her sterling craftsmanship and fearless honesty in searching out the exact, precise word that conveys the very shade of meaning one can sense was there in the original; and last but far from least, Farrar, Straus and Giroux gets a prolonged standing ovation for making this joyous discovery possible for the US audience.

Thank you all. And happy birthday, young Sjón, on the 27th!
Posted by Richard at 6:30 AM