THE COURSE OF TRUE LOVE, a prose sequel novella to A Midsummer Night's Dream, the delicious comedic play written by William Shakespeare 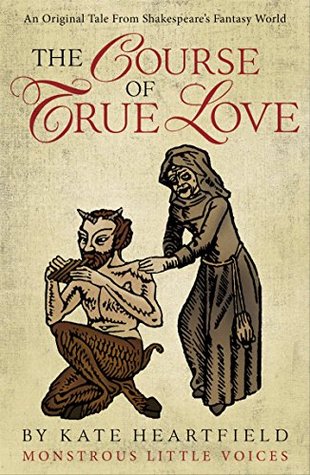 The Publisher Says: Pomona, a gifted hedge-witch of advancing years in fair Illyria, is walking about her own business when she spies a fairy gentleman trapped in a secret garden. Vertumnus, King Oberon’s emissary to the Duke, has been taken captive by proud Titania, and a war is in the offing... unless Pomona can prevent it.

My Review: A moving, touching, lovely tale of love surprised. Heartfield creates, in Pomona and Vertumnus, a pair of seasoned travelers whose voyages on love's tides have left them on land and grimly content that it be, and remain, so. Neither, however, can resist a puzzle to solve, a clue to pick and unravel into a solution, so when Pomona accidentally sees into Vertumnus's walled prison yard-cum-garden and also through his enchanted appearance as an old hag, she cannot accept that her first vision is not the correct one and that her undignified descent into the enchanted courtyard is not showing her a lie when she sees Vertumnus's haggish countenance. The lie she knows her eyes tell her piques her curiosity, which once aroused is not to be stilled by the shrilling and shouting of tiny Queen Mab playing her role as jailer to the glamoured Vertumnus:


"And if you had seen this man, what of it?" squeaked Mab. "Why seek him with such ferocity? Whenever you think you glimpse a man, you charge toward the place he was last sighted and seek him behind any bush or tree? I advise you as a woman of some years myself: your fond chase will only make your quarry despise you more. Chase cattle, not men. You are, by your looks, not wealthy enough to atone for your wrinkles in the eyes of any man worth the hunting."
The woman set her lips together but said nothing. If she were a trap, sent here by Titania, she must have no awareness of it--or else she could play a part better than any mummer. She had wandered into this garden only to be taunted, to be called ugly and foolish by a bitter old gad-fly.
By Jove, he would prove the little harridan wrong if he were wearing his own appearance.
"You rere-mouse," he scoffed to Mab. "You speak of love as you would of farthest India, knowing nothing of either."
In response, she flew at him, her ghastly team stamping toward his nose. Without thinking, he caught her between his cupped palms for just a moment, but it was just long enough for Mab to work her magic on him. He screamed as pain spread from his feet upwards, all over his skin, and in his mind flashed a strange vision, so that for a moment he thought his prison was not a beautiful garden but a dank stone cell, smelling not of blossoms but of mould. ... Pomona put the book down on the bench and a hand on her hip. "Do not trouble the fairy, madam. She speaks the truth. I know full well I am no beauty. I do not seek a husband, here or anywhere. Show me the way out, then, I will trouble you no more. Where is the gate? I see none."

And so we have the traditional romantic beginning: meet cute, start by being antipathetic to each other, but unite in opposition to a third party. There's a reason that's an evergreen. It worked then as it works now. Get them juices flowin' and then let the underlying chemistry have its turn.

But wait, there's more! After all this novella is a follow-on to one of Shakespeare's most famous romantic comedies. We've already had mistaken identity, ensorcellment, a changeling child's fate revealed, immortality...what's next? Oh yeah! Ignition!


...he was never privy to Oberon's laughing whispers with Puck and his other councillors, and never invited to join the Hunt with the other favourites. He was always more than human but less than spirit.
If he were a true fairy, he would be gone now, off on the air like a sylph, vanished like first love. If he were a true fairy, perhaps--probably--Titania would not have been able to take away the powers she had given him so long ago.
Instead he was bound, and hurt, and limping behind this witch like a pig being led to market.

I don't know about women's feelings on the matter, but to me there is nothing sexier than a man under arrest and/or tied up. No wonder Pomona starts the cross-examination that, as always, elicits the startling details of the male love interest's past which are destined to warm her reluctant heart to him in his pitiable vulnerability. Heartsfield does not stint in assigning pitiability to Vertumnus! Changeling, outsider, neither fish nor fowl...well, what decent heroine could resist that?!

Not his rescuer, that's for sure:


"Truth is truth," she said. "Beneath, above, inward, outward."
"You say that, who saw me as a woman yesterday."
"And were you any different, when I saw you as something else than what you are? Would you have acted any differently than you had? You cannot seek your nature, you can only make it, moment by moment." ... "Then tell me, what is your nature, Pomona?"
"It is whatever I need it to be--or whatever the person paying me for my services needs it to be."
"So simple! But Rumi says the king knows not that he is a king when he sleeps, and the prisoner knows not that he is a prisoner. So what are we, then, when we are sleeping? When we are only ourselves, at night, naked and unoccupied?"
"Are you always unoccupied, then," she said, "when you are naked?"

That loud thud you just heard? Yeah, that was Pomona falling for Vertumnus. He's already fallen for her, his rescuer from Titania's cruel captivity. And now their world trembles because there is no enemy, human or faerie, who can stand against the certainty of mature people in love. It falls to the pair of them to avert the onset of still worse bloodshed in the Tuscan Wars, this imaginary seventeenth-century world war, as soon as they face down the wrath of faerie royalty.

Assuming they survive....
Posted by Richard at 3:30 AM