THE BRICK MURDER: A Tragedy, and Other Stories earns my happy respect for quality writing that's still fun 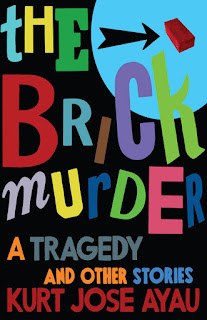 The Publisher Says: THE BRICK MURDER: A Tragedy, and Other Stories is a funnily tragic collection of stories that always borders on wondrously correct incorrectness. A manic and angered sub-sub-librarian learns about cultural differences from a manic and angered patron. A junior faculty member gets paid to befriend a senior star philandering poet. Three kids and a rabbi discover the awful truth that God really is a process God. A token black man Bob the Negro accomplishes revenge in his work place at a price. And, a brick plays a momentous part in a tragedy. This collection comes one short of a dozen, but nothing short in its style and reach.

My Review: Sixth winner of the Ruby Pickens Tartt Award for First Fiction Collection Kurt Jose Ayau brings an outsider's eye (meaning he doesn't squint through the same Galileo-era telescope) to short fiction. He doesn't write plotless blobs of pretty sentences, like the Writerly Reviews publish, he writes STORIES, with beginnings, middles, and endings. Sometimes they aren't in the usual places, but they're there. Livingston Press grants this prize annually to an author who has never had a collection of short fiction published, naming it after a WPA Writers' Project worker who went all over Depression-era Alabama collecting the oral histories of former slaves. Tartt's work never appeared under her own name until after she died. The publisher honors her unsung service to literature by awarding the prize of publication to a previously unheard or ill-attended-to voice. Ayau's collection is eleven pieces strong, and there are far more hits than the few near-misses in these pages. The title story takes us to the last moments on Earth of a pompous, arrogant blowhard ex-military teacher. He's typical of most of the full professors I've ever known, completely oblivious to anything but him/herself and his/er hobbyhorse; well, this time, it costs the old fuffertut dearly. Like, everything. I took great Schadenfreude in this revenge tale. As Ayau is a professor at a military school, I wonder if it's not simply wish fulfillment....

"Official Friend", "Calling It Off", "Sand Castle", and "Culture Clash" all ring their various changes on the theme of identity and its roots; it's evergreen territory, this, and Ayau rakes through the fallen treasures to very good effect.

"At A Loss for Words", "Outsourcing", and "By the Numbers" are tales of betrayal of trust, the scales-falling-from-their-eyes moments that are physically and psychically painful; in at least two cases lethal....

"Murray and the Holy Ghost" and "Spawning" are told from the eyes of children, and are, to my mind at least, the least successful in the collection. Both revolve around those last moments of innocence before the quotidian world of adulthood crunches the child's illusions about himself, his universe, and his most treasured fantasies. Ayau's child voices are well presented. I just don't like that story's effect, no matter how well it's told, and I am also a little tired of kids carrying stories in fiction. Too many iterations of that here lately, and frankly I'm over it.

And then there's "Bob the Negro." What a story that is. I hope it's anthologized in every future work that pretends to deal with race in America. Hugely successful sales maven Bob takes a job in a regionally successful, all-white company in Podunk, New Enland. He energizes the sales single-handedly. He makes friends of one and all. He's on top of the world! So he thinks. Disturbing hints of a different reality make it through his oblivious, overachieving shell; he lays traps to discover exactly what his suspicions tell him could be going on; and then, when his worst fears are exceeded, he pulls a major bonehead maneuver and loses everything...except success, which he can't keep away with a barge-pole. This story is the chef d'ouevre and it alone is worth the $6 the book costs. Buy the book, read the story, and come tell me about it if you disagree...but I suspect you won't. It's that good.
Posted by Richard at 1:28 PM