DEBRIS, another debut story collection I want you to read, so go get it! Go on! GO! 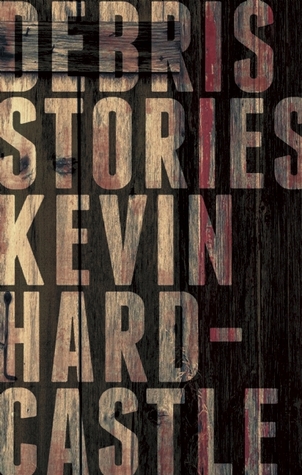 The Publisher Says: The eleven remarkable stories in Kevin Hardcastle’s debut Debris introduce an authentic new voice. Written in a lean and muscular style and brimming with both violence and compassion, these stories unflinchingly explore the lives of those — MMA fighters, the institutionalized, small-town criminals — who exist on the fringes of society, unveiling the blood and guts and beauty of life in our flyover regions.

My Review: Another debut collection for a Canadian writer! It seems I have an affinity for CanLit, doesn’t it. Hardcastle, like last month’s reviewee Kris Bertin, was well-published in prestigious venues before this book was collected. This collection won the 2016 Trillium Prize, which is awarded to a book by an Anglophone Ontario writer (a separate prize, Prix Trillium, is presented to a Francophone Ontario writer). It’s not only a prestigious award, it’s lucrative, carrying a purse with $20,000 in it! The publisher receives a publicity budget boost of $2,500 as well. Les Canadiens, they know how to do literature right, eh? Without further ado, we shall proceed to the eleven stories Hardcastle and Biblioasis have given us:

Old Man Marchuk starts the reader off at 90mph down the road Hardcastle has us pointed down. Constable Hoye, from Canada’s eastern half, gets a call from prairie town local Marchuk to come to the scene of a shooting--one he’s just committed. Two boys burgled his barn and he shot them, then called to report it so someone would come clean his mess up. Hoye sees to it he stands trial and thereby becomes a pariah. He and his pregnant wife, later his newborn son as well, live in a state of siege. Old man Marchuk’s relatives and friends harass the man, escalating their violence until he surprises them all with a surprise raid that scatters the malefactors. But he, Jenny, and their new baby are stuck there but still aren’t safe…can’t transfer out for “one year, three months, and eighteen days.” Bone chilling.

The Rope really did a number on me. Matthew comes home to help his mother Maryanna after she has her license revoked for one too many impaired driving stops. Booze is her sole companion and always was. Her life is ruled by her addiction and she has no interest in or intention of changing that. Matthew does everything he can but, in the end, Maryanna has to hit rock bottom in spectacular fashion and decide from there where she wants to end up. A harrowing look in a full-length mirror for me. Unsettling.

Montana Border has us riding along with Daniel, a mixed martial arts (MMA) fighter on the deep backwoods circuit. He wins, loses, bleeds, and suffers while doing the one thing he knows how to do: fight. Like all Hardcastle’s men, he has no way to conceive of a life without violence. Daniel wins one victory too many and comes under fire...literally...from the defeated and injured man’s biker friends. A good man in his way, Daniel is one of the men the world doesn’t need and he knows it. He is in a struggle all the way from cradle to grave and it seems as though he doesn’t much mind what side of the dirt he’s on. Bleak and beautiful.

To Have to Wait has us riding along with Paul and Matthew while they drive from their small Eastern hometown to retrieve their father from his stay in a coastal public mental health facility. (This is how you know the story is set in Canada, there’s a public mental health facility.) While taking a pit stop on the road a conflict arises and is resolved with coordinated violence from the brothers. They proceed to pick the old man up, bring him home, and sit down to a family dinner. Honestly this is the only story in the collection where the violence wasn’t well used. It felt to me as though the author said, “whoops there’s no fighting in this one,” picked up his quill, dipped it in blood, and rectified that. Not my favorite story.

Bandits begins with a weird coming-of-age ritual: father, son, and extended (male) family out snowmobiling across a frozen lake to go shoot the hell out of the local police chief’s ice-bound boathouse. Ah, thought I, we’re back into the Hardcastle groove! And are we ever. The family business here is banditry, organized by Charlie’s pa, a small-time crook whose oversized personality and massive musculature make him impossible for his son, his brothers, and his nephew to disobey him. It’s a very clever business centered on the weather. They don’t pull heists unless it’s snowing or about to snow so they can’t be tracked by their machine’s traces. The local constabulary knows the family is behind the thefts as you do in a small community but can prove nothing. Not to say they’ll quit trying, but they’re up against a smart opponent with a tight crew. But all good things must come to an end, and Charlie faces some high hurdles on his path to adult responsibility. This is a cracking good yarn, exciting and moving in equal measure. A noir film waiting to be made.

One We Could Stand to Lose follows Arthur, the night manager of a rundown resort hotel-cum-casino that was once glamourous indeed and is now a blight, a flophouse and a hotspot for violence and murder. He also happens to have a very interesting side business that makes his position extra appealing, one that’s highly illegal and could not be more perfectly disguised by his job. The old glory days don’t haunt Arthur. He lives in the hotel, works in the hotel, breaks the law in the hotel, and until the owner decides it’s time to demolish the hotel, Arthur can’t be bothered to dredge up his memories. He supervises the dismantling and preparation for detonating the place he’s lived for more than fifty years while numb, disbelieving, unsure of what he should think or feel. In the end he makes the only decision that he could possibly make, however painful it is, as there is no alternative. Outstanding, the best in the collection.

Spread Low on the Fields is a score-to-settle homecoming story in the vein of Walking Tall. Sean O’Hara comes home to bury his retired father after he is murdered by a fellow retiree and old friend. The murderer can’t stand trial because he has dementia. Sean can’t accept that his father’s death seemingly counts for so little and sets out to even the scales. Haunting.

Hunted by Coyotes brings us into the world of the door-to-door scammer/salesman. Those desperate souls who fall into the work when there is nothing else for them to do and then have trouble climbing out of the pit. Road trips to small places, working the poor and the gullible with promises of saving them money. You wonder how these people can look themselves in the mirror? They’re in the same boat as their marks! Everyone for themselves. It’s a chilling and disturbing peek into a life I’m deeply glad not to know firsthand. I have one minor complaint: The coyotes of the title appear, but do nothing to advance the plot. I expected some kind of non-symbolic role for them based on the title, and got none of that.

Shape of a Sitting Man is another brother/revenge story. The bond of love between brothers is a major subtext in this collection. It’s nowhere more explicit than it is here. A younger brother takes out his older brother’s assailant who left him permanently damaged, unable to function. We’re not told how or why, because who cares? It’s a brother’s duty to stand up for his family when harm has been done, and by god the kid does it. Tight, compact, direct.

Debris works the small-town no-secrets vein again, but does so in a delightfully twisty way. It starts from the first line: “Come pale morning the old woman found a greycoat squirrel drifting dead in the swimming pool waters.” That grabbed my nosehairs hard. Eyes still watering, I followed the story of the town’s known miscreant from a family of them that has murder as its stakes. Very seldom do I say this, but this story is crying out to be a novel. There is a wonderful thriller in this thrilling but too short tale of an elderly couple savoring their togetherness while aging as gracefully as they can. Being country folks, they’re very clear on how to survive independent of help when possible but sensible enough to know when to call out the cavalry. The first murder brings the local constable to their door, and as events unfold brings him and his cronies back to follow up a lead the old woman has given them to the whereabouts of the local bad seed. Again stymied by the absence of hard evidence linking the bad seed to the crimes, the constabulary back off. And that’s when the country folk sense of justice stands tall. I loved this gem of a tale.

Most of the Houses Had Lost Their Lights charts the troubled course of Kayla’s marriage to Matthew, a man losing his battle with his demons. Kayla is compelled to commit him to a public psychiatric facility (I love Canada’s social safety net) or see him go to prison for assaulting fellow tavern patrons, one of whom ended up embedded in a wall. Her husband absent for the moment, she sets out to keep body and soul housed, fed, and clothed for herself. Being a strong and intelligent woman, she does exactly that. She works hard at a job where she’s the only woman on the shop floor. She fetches Matthew home when he is released and hears words I imagine any spouse would want to hear: “You did everything right,” he said. Deeply satisfying.

Kevin Hardcastle’s Trillium Award-winning collection also does everything right. No less a luminary than John Irving praises his use of language as “a soothing balm for the pain” that his characters suffer. I concur, and I am reaffirmed in my conviction that CanLit is unfairly neglected here in the USA. There is no shortage of exciting top-quality work in every genre coming south. I really hope that more and more of us will cotton on to this fact and make noise about it. We can all only benefit from increasing awareness of the riches flowing South. Start here! Kevin Hardcastle deserves your immediate attention.