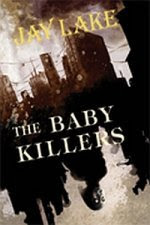 The Publisher Says: "Within our tale, gentle reader, you will see writ before you a palimpsest of low living and high misdemeanor, and the curious redresses that are visited as a result thereof . . ."

In The Baby Killers, Jay Lake restages mankind's Fall from Grace as an alternate-history steampunk fable. Written in a style of rambunctious Victoriana-that-never-was, this novella is set in Philadelphia in 1907, when that city serves as the seat of the British Dominion of the Americas, and as a Pandora's Box of sin and vice. The Governor-General has a taste for violating innocents, while the good Dr. Scholes uses them to fashion his mechanized agents of Justice. The Gollinoster, a feminine incarnation of angry retribution, wanders beneath the city streets - and an undying creature of ancient destruction is rushing to meet her. Villains and heroes (categories that overlap significantly) battle in a story of debauchery, degradation, radical experimentation, mad metaphysics . . . and a farting Frenchman.

Both popular culture and actual history are mined here to create a tale in which the use of idealized technology meets our darkest desires . . . and the result is positively electric.

My Review: Never let it be said or implied or even thought that Jay Lake is anything other than adventurous. This is an exuberant trip into a sick, weird vision of a sick, weird culture.


{She} stood sobbing in front of her house. She, who had not cried since age ten when her brother took her virginity in the upstairs maid's room. ... There had probably been six people in the house when {the girl} exploded into flames. Two were girls from her list, valuable members of her stock book.

If this doesn't remind you of the response of the owners to the Bangladeshi clothing-factory collapse, and the BP America president's response to the Deepwater Horizon disaster, you're not paying attention.

The Baby Killer of the title isn't what you think it is. Well, it sort-of is; but not really because it's so much worse than what you think it is: Dr. Scholes uses the living brains of babies to power his retribution machines, his Robocops of steam, which of course means the babies qua babies are dead, though their "lives" are continuing and are augmented by Countess Lovelace's punchtape difference engines.

So that's the book's level of success. It's a dark and bitter look at the endless and boundless vileness of humanity, and it's a cautionary tale told too late about the price extracted from us all for the sin of hubris, and it's darkly funny as well as starkly moral. It's compact, at 68pp, and so it's impossible to overdose on the grims. It's got a farting Frenchman as its Angel of Justice. It's, well, it's surreal and it's weird and I can think of no good reason for you not to buy and read it.

So go already. Amazon doesn't run on air.
Posted by Richard at 2:00 AM