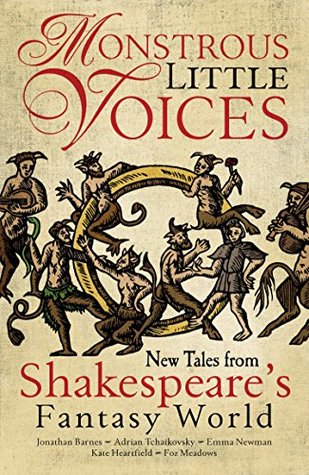 It is the Year of Our Lord 1601. The Tuscan War rages across the world, and every lord from Navarre to Illyria is embroiled in the fray. Cannon roar, pikemen clash, and witches stalk the night; even the fairy courts stand on the verge of chaos.

Five stories come together at the end of the war: that of bold Miranda and sly Puck; of wise Pomona and her prisoner Vertumnus; of gentle Lucia and the shade of Prospero; of noble Don Pedro and powerful Helena; and of Anne, a glovemaker’s wife. On these lovers and heroes the world itself may depend.

These are the stories Shakespeare never told. Five of the most exciting names in genre fiction today – Jonathan Barnes, Adrian Tchaikovsky, Emma Newman, Foz Meadows and Kate Heartfield – delve into the world the poet created to weave together a story of courage, transformation and magic.

My Review: I hereby make an Executive Decision to promote the works of fiction in this collection from stories, as the publisher describes them above, to novellas. Considered in terms of length, I think that's justified, if only barely; it's the depth of storytelling and the complexity of the interrelationships that lifts the tales out of storydom. Admittedly the authors each had a tremendous boost out of the story ghetto by working within the Shakespeare-verse. This has saved a tremendous amount of worldbuilding effort on their part as a certain level of background familiarity can reasonably be expected of readers attracted to the tales. The problems that come with working inside a set of conventions and premises not of one's own creation aren't to be minimized. Honoring the unknowable intent of the original creator, going with or against the tide of the original creator's fan-base's fixed ideas and assumptions about same, while avoiding the artistic death-spiral of checking one's own creative impulse at the door is a feat of no small proportions. Bravo to each and all for navigating these shoals gracefully and successfully.

Equally graceful and successful is publisher Abaddon Books's cover and interior design. The use of period-sourced woodcuts as cover images and interior part-title pages is visually and intellectually pleasing. Woodcuts are shorthand for a rustic or home-made aesthetic, and the ones chosen for use here as well as on the covers of the individually published novellas are appropriately playful in nature. They all capture the spirit of the project whole and entire as well as illuminating certain aesthetic choices made within the illustrated novellas.

And that right there, that little word "collection," is a big reason why the reviews of the parts are different from the whole. Is this a collection? Is it an anthology? I deliberated about that for some time. My love affair with Wikipedia's easily accessed and readily digestible information led me there first, where I found this indirect illumination of the distinction between an anthology and a collection:


Since publishers generally found anthology publication a more flexible medium than the collection of a single poet's work, and indeed rang innumerable changes on the idea as a way of marketing poetry, publication in an anthology (in the right company) became at times a sought-after form of recognition for poets. The self-definition of movements, dating back at least to Ezra Pound's efforts on behalf of Imagism, could be linked on one front to the production of an anthology of the like-minded. Also, whilst not connected with poetry, publishers have produced collective works of fiction from a number of authors and used the term anthology to describe the collective nature of the text.

(emphases added)
A collection, then, is a single-author sampling; an anthology has multiple authors. In the SF/F field there exists a long tradition of themed anthologies from Groff Conklin's many forays beginning in the 1950s all the way through 2016 Hugo-winner Ellen Datlow (for Best Editor, Short Form), and I'm confident that the form will continue into the foreseeable future.

I'll call this book a themed anthology. Its shared premise is that the Mediterranean world of Shakespeare's invention, in which he set many stand-alone comedies and dramas, was deliberately created by Shakespeare as an exercise in worldbuilding. While the modern concept of worldbuilding didn't appear until 1820, we attribute so many powers of prescience and invention to him that this latest one doesn't stretch his legend unduly. Five authors take a play or several plays from this loose grouping of works and, instead of retelling the source material, write prose sequels of sorts to the plays. I've seen several references to these novellas as Shakespearean "fanfic", but the amateurish clumsiness this mildly pejorative and deeply (if unfairly) dismissive term hauls as its baggage is insulting to the fine writers here included. It's factually accurate perhaps, but the connotations aren't.

A collection of Shakespearean "fanfic" is a terrific idea no matter what, one I hope we'll see more of, but this anthology came out tied to the 400th anniversary of Shakespeare's death. Tying the publication of MONSTROUS LITTLE VOICES to such a cultural milestone is genius and I hope the advance sales were monster (which would aid the project in remaining on the backlist forever). If anyone should profit from the Bard of Avon's legend, I'd love it to be modern creative writers working the seams of precious coal he found to invent new and exciting ways to delight and warm us by the collective hearthfire. Fires need fuel. The hottest fires use the best fuel. What better fuel is there than that which comes from time-tested sources? Four hundred years of mining hasn't exhausted this source.

Digital Humanities scholar Dr. John Lavagnino contributed an Afterword to the anthology that provides a clear and concise overview of the aims, sources, and results of the project. It reads to me like a call to arms:


...Pericles returns to a plot resolution {Shakespeare had} used as early as The Comedy of Errors and found fascinating throughout his career: the astonishing reunion with those who seemed lost forever. That particular kind of wonder doesn't appear here, and indeed fits a play better than this book's new kind of exploration. Instead we get the richness of a fictional world that could continue rolling along forever, that could keep leading us to new places and startle us not by returning to our beginnings but by going on and on.