EVEN IN THE CANNON'S MOUTH, fourth novella in Monstrous Little Voices and a follow-on tale to Shakespeare's As You Like It 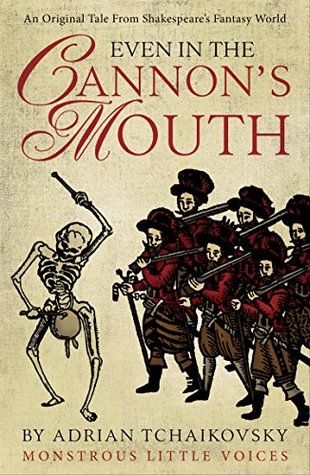 The Publisher Says: Illyria’s Duke Orsino has raised new, powerful allies, and in a last-ditch attempt to win the war, Don Pedro and his brother John, wise old Jacques and the physician Helena sail to Milan to appeal in person for the wizard Prospero’s aid. But unseasonal storms drive them onto the Illyrian shore, and into the hands of their enemies...

My Review: Thiiiiiiiiiiiiiiiiis close to being my tippy-top very-best favorite in the collection! It is not because of any lack or failing that Tchaikovsky's entry comes in at 0.999999999999 of 1 in my affections, it is the happenstance of placement. This fourth of five novellas takes on As You Like It, a dear favorite play of mine; but the tale does so very near the close of the collection's business, and so is constrained to bring major thematic strands together while working within the conceit established for the whole endeavor.

A lesser writer would be sunk by meeting these rigorous demands. Tchaikovsky makes doing so look effortless and makes his audience chortle, snicker, giggle, and all while mopping away strange bits of moisture from the corner of the eye. No idea where those came from. But here's the rub for me: I sense that there was a lot, nay a plethora, of material that Tchaikovsky whipped in to the crème Chantilly that is Even in the Cannon's Mouth and was compelled to jettison it to serve his multiple masters.

I realize I could be completely wrong, Tchaikovsky isn't an intimate of mine and doesn't confide his secrets to me; but read this:


"You are most kind," Viola spoke over him. "And pray, will you not join us, who has such respect for learning?"
They passed some moments exchanging compliments, then sent the noble Spaniard off for more mugs, consigning him to the seven-deep scrum about the tapster. Viola let Feste ramble, watching the two foreigners try to follow his baffling loops of logic. At last she said, "Aye, we two are belike the foremost men of learning in all Illyria, and yet you see how fortune treats us! I myself have converse with angels and airy spirits most nights, and have studied with no lesser man than Doctor Dee, while Father Topaz has honed his craft in the invisible college of Verrucoporcus and conjured the stone philosophical. It has been many a cold week since last a stranger showed kindness to two poor scholars such as we."

This grace note off the mash-up within pastiche inside hommage shows the attentive reader just how much pruning must have gone into keeping this novella a novella and not a stonking tome. (Saint Quinculencus? HA!) A mind this well furnished and a spirit this inclined to playfulness must be severely disciplined to keep things concise.

The form Tchaikovsky uses to frame his tale is also an aid in this task. Acts and scenes and stage directions function as a corset does in assisting the costume to cover more fleshed-out bones than it could otherwise. They're in the spirit of the Bard, they're familiar to the audience likely to pick up the book, and they're practical. It isn't a small feat to understand all that and use it so seamlessly for all those purposes that the typical reader passes them all by unthinking.

These passages reveal the immense and demanding task behind the seemingly effortless storytelling going on in the foreground:


"We are between the pages of the world's book. Each scene and moment of our lives is pieced together in this space before it's served to us. We are where none of us was meant to be."

May I just say YES to this? And:


Parolles was still at his fictional Battle of Lepanto. Already he had travelled on a cannonball and hauled himself out of the water by his own hair. Each listener had tried to challenge the lie--Orsino, Don John, and Sir Toby among them--and each challenge he slew, and then piled up the bodies to reach even greater heights of the absurd. Where his words might have taken him, when the newcomers broke in, was past all guessing. Some men, when given rope, refuse to hang themselves but weave a ladder to the moon.

Aside from the humor and the dignity of the passage on its surface, there is in concert with the passage above a deep structural function to those ideas expressed. This becomes more obvious when the book has been consumed whole. But there is something, some gravitic effect like dark matter, that pulls the reader towards these moments and carves their importance on the awareness paid into any work of fiction.

Yet all without any sense of didactic purpose or clanking of barely invisible plot machinery. That, my friends, is the best quality of writing going today.
Posted by Richard at 3:14 PM